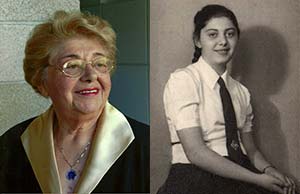 To honor her memory, we’ve provided a link to an interview Magda did in advance of her Iowa visit in 2016 and a link to her obituary.

May her memory be a blessing.

To honor her memory, we’ve provided a link to an interview Magda did in advance of her Iowa visit in 2016 and a link to her obituary.

Remembering Magda Brown, a Holocaust Survivor Who Shared Her Story With Millions

Over the past two decades, Magda Brown and her daughter, Rochelle Brown-Rainey, have traveled across the country and around the world, driven by a mission to share Brown’s harrowing story of surviving the Holocaust. Brown embraced every opportunity to reach people, speaking to more than 100,000 people in person – and reaching millions more online.

Brown, or “Grandma Magda” as she was known to most, left each audience with three key lessons: Protect your freedom. Think before you hate. Stand up to the deniers.

Magda (Perlstein) Brown died July 7, 2020 at her daughter’s home in Morton Grove, Ill. She was 93. She is survived by her daughter, Rochelle Brown-Rainey, her son-in-law, Charles Rainey, and her son, Bruce Brown; her grandchildren Michael Rainey, William Rainey, Norman Rainey, Amy Rainey, Jessica Matas, Jennifer Brown, Rachel Brown, Robin Brown, and Philip Ide; nine great-grandchildren; three great-great-grandchildren; her sister-in-law Helen Brown; and many nieces, nephews, and cousins; along with supportive and loving family and friends across the United States, Hungary, Germany, and around the world. She was preceded in death by her husband of 52 years, Robert Brown; her brother, Miklos Perlstein; her sister-in-law, Charlotte Weinstein; her brothers-in-law Fred Brown and Harry Weinstein; and her nephew, Rodney Brown.

A kind and caring grandmother who preached love, tolerance, and acceptance, Brown gave amazing “Grandma hugs,” “noisy kisses,” and ended every conversation with, “I love you THIS MUCH,” with her arms out wide. Brown loved traveling, embarking on new experiences, and forming beautiful friendships with people around the world. An incredible host, cook, and Jewish grandmother, everyone was always welcome at her kitchen table and for a stay at the “Brown Hotel.”

Brown was known for her positivity, her courage, and her incredible determination. As she often told her audiences, “You have to have faith, fantasy, hope, drive and determination that tomorrow will be better.”

A member of the Speaker’s Bureau of the Illinois Holocaust Museum and Education Center, Brown spoke at events big and small, in churches, synagogues, mosques, elementary schools, and universities, and met with mayors, governors, and leadership from Congress, the Catholic Church, and the German government. Brown frequently participated on panel discussions about preventing genocide and fighting for the rights of LGBTQ people, immigrants, refugees, and other vulnerable groups. Although it was painful to remember her horrendous experiences, she believed her story and others had to be told to ensure people understand that the Holocaust was a very real and frightening period in the 20th century-and to ensure that we as a society learn from the past.

In 2010, Brown traveled to Auckland, New Zealand, to speak at the Eucharistic Convention, and in 2013, Brown received an honorary Doctor of Humane Letters from Aurora University in recognition of her “dignified, profound courage and her tireless efforts to share the Holocaust story.” Brown’s story was recently featured in Final Transports, an Illinois Holocaust Museum and Education Center documentary that aired on public television stations across the country this spring.

Brown was active with Action Reconciliation Service for Peace, a German peace organization founded to confront the legacy of Nazism. Brown traveled to Berlin in 2018 to attend the organization’s 60th anniversary celebration, where she shared her testimony in Germany for the first time. Through ARSP, Brown formed long-lasting friendships with Gregor Darmer and other young Germans who interned at the Illinois Holocaust Museum, demonstrating the love and reconciliation that is possible between survivors and Germans of future generations.

In October 2018, Brown was about to fly to Pittsburgh to speak at Chatham University when she learned of the tragic shooting at the Tree of Life synagogue. Brown didn’t hesitate to board the plane, saying: “Now the world needs to hear the message even more. Let’s go.” Her experience was chronicled by The Washington Post https://www.washingtonpost.com/lifestyle/style/a-holocaust-survivor-was-booked-to-speak-in-pittsburgh-a-massacre-wouldnt-stop-her/2018/10/29/978bfb24-db24-11e8-b3f0-62607289efee_story.html?utm_term=.1b647737efa5 and a variety of other media outlets.

A testament to her determination, Brown did everything in her power to never miss a speaking engagement. In 2017, after falling and breaking her spine on the way to Storm Lake, Iowa, she decided to Skype into her speech from her hospital bed, sharing her story with hundreds of students and community members. Throughout the COVID-19 pandemic, as her events and trips were canceled, she took to Facebook Live and Zoom to connect with others from home.

Brown was born June 11, 1927, in Miskolc, Hungary, to Regina and Jozsef Perlstein. She grew up in a safe, loving home and enjoyed a normal childhood. At the time, Hungarian Jewry as a whole lived in comparative personal and physical safety.

Although an ally of Germany, Hungary initially refused to deport Jews with Hungarian citizenship. However, in March 1944, German troops marched into Hungary with Adolf Eichmann, who was sent to establish special details for implementing the “Final Solution” of the Hungarian Jews http://www.yadvashem.org/yv/en/holocaust/about/09/hungary.asp.

A few weeks after the Nazi occupation, on March 19, 1944, all Jewish people were concentrated in a designated area, called the “ghetto.” The ghetto was later evacuated and Brown’s family was ordered to move into a transition camp in a Miskolc brick yard.

On June 11, 1944 – Brown’s 17th birthday – she and her family were crowded onto a railroad box car with 80 other people. Each transport held thousands of people, including children and the elderly. They traveled for three days without food, water, or any idea where they were being sent. The final destination was the Auschwitz-Birkenau concentration camp http://www.ushmm.org/wlc/en/article.php?ModuleId=10005189 in Poland. After arriving, Brown was separated from her mother, father, aunts, uncles, cousins, and friends. It was the last time she saw them – they were sent directly into the gas chambers.

After months of torture and imprisonment in Auschwitz, Brown was “selected” to be sent to a work camp in August 1944. She was one of a thousand Jewish Hungarian women who were transported to Allendorf, Germany, a sub-camp of the Buchenwald concentration camp http://www.ushmm.org/wlc/en/article.php?ModuleId=10005198 and the site of one of Germany’s largest munitions factories. The women were enslaved under dangerous conditions making bombs and rockets, filling them with liquid chemicals. The chemicals turned their skin yellow, their hair orange, and their lips purple.

In late March 1945, Brown and her group were sent on a death march to Buchenwald. Brown and several prisoners decided to attempt an escape, crawling on the ground and hiding in a nearby barn. For a day and a half, they hid in piles of straw, knowing that they would be shot if they were caught. Two soldiers from the 6th Armored Division of the U.S. Army then discovered Brown and the other women and liberated them. Brown was forever grateful to these brave, heroic soldiers

After liberation, Brown spent six months in a displaced persons camp in Germany. With the assistance of the U.S. government, she was able to return to Hungary and search for her family. Out of her extended family of 70, only six people had survived. Brown sought to locate her brother, Miklos, who served in the Hungarian military’s Jewish labor force, and was captured and imprisoned by the Russian army.

After the war, with the help of the Hebrew Immigrant Aid Society (HIAS), Brown made contact with her aunts and uncles in Chicago, who sponsored her immigration to the U.S. Her family members welcomed her to their home in September 1946. It took many years for Brown to overcome recurring nightmares of the Holocaust.

Eventually, Brown was able to build a new life in the U.S. With the help of the National Council of Jewish Women, Brown attended evening classes in American History and English. In 1949, she married Robert Brown, known to most as Bob or Grandpa Bobby, and together they raised their daughter and son in Skokie, Ill. Brown was finally reunited with her brother, Miklos, in 1962 – nearly two decades later.

For 40 years, Brown worked in a physician’s office as a certified medical assistant. Brown was an active member and past president of the American Association of Medical Assistants, Illinois Society.

Magda and Bob Brown were married for 52 wonderful years before he passed in 2001. Bob and his loving Chicago family took Magda into theirs, but he also helped his wife preserve her Hungarian heritage, learning Hungarian vocabulary and bringing home paprika from a spice shop to help food taste like home. Later in life, they often traveled to Hungary, Israel, and other destinations. A supportive and caring partner, Bob would have been so proud to see all that Magda Brown accomplished later in life as a speaker.

Brown made the world a better, kinder, and more thoughtful place and will be missed by so many. Her incredible lessons and legacy will live on in her family, friends, and in the millions of people she touched with her story. Please visit MagdaBrown.com to learn more about her story and share it with others.

In lieu of flowers, the family suggests that people donate to the “Magda on a Mission Fund” at the Illinois Holocaust Museum and Education Center or to HIAS. Services are private. To leave condolences and for information, including link to view service: Shalom Memorial Funeral Home (847) 255-3520 or www.shalom2.com.