‘He was so happy’: Holocaust survivor reunited with kids for his 100th birthday 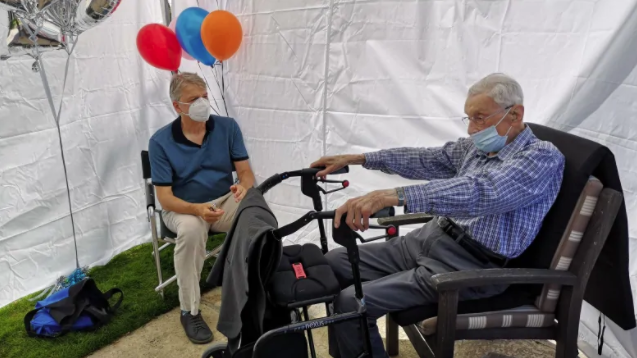 To say Herman van Norden’s life was eventful is somehting of an understatement.

He survived a genocide and a world war overseas. He led a long career in medicine, fell in love and raised a family in Canada.

But after decades of lived experience, one of his most cherished moments came on a hot Vancouver July morning, during a global pandemic. A day where he could reflect on life’s journey with those dearest to him, while creating new memories.

It was the day he turned 100 years old — and was reunited with his children.

“He was so happy,” said Simon van Norden, who travelled across the country and quarantined for two weeks so he could celebrate that day with his father and two sisters.

“I just feel so lucky that everything has come together, that we could actually see him, that he made it to this landmark.”

A story of survival

Herman van Norden was born on July 26, 1920 into a strictly orthodox Jewish family in Amsterdam and spent much of his childhood raised by a single mother. He decided to pursue medicine, a profession he hoped would allow him to support a family of his own.

But he was forced out of medical school during the Nazi invasion of the Netherlands.

As the German forces carried out the Holocaust, the army enlisted him as a medical assistant. He was stationed inside a theatre that the Nazi’s had requisitioned and used as a holding area for Jews that were to be deported to concentration camps.

One night, he saw guards carrying his mother.

“He takes it upon himself, at quite a bit of risk, to declare to the German authorities that she’s too sick to be transported,” he said. “He carried her past the German guards and back to relative safety in her home.”

Herman van Norden’s mother survived for another year and a half before she was found by Nazi soldiers. She was sent to Auschwitz, where she was killed in a gas chamber.

He spent the remaining years of the war hiding, with the help of the Dutch resistance. He never stayed in the same place for more than three months.

By the time the country was liberated, much of his family had been wiped out. About 70 per cent of the country’s Jewish population was killed during the Holocaust.

After the war, van Norden finished medical school. He emigrated to Canada with his wife-to-be. The pair started their own medical practice in Vancouver.

“He really appreciated the fact that Canada was so good to him, and that he prospered and had kids and managed to put all his kids through university, and that Vancouver was such a welcoming and stable and prosperous place for him,” said his son.

Reflecting on the past

Herman van Norden now spends his days at a quiet retirement home in Kerrisdale. His daughters also live in Vancouver.

His son Simon lives in Montreal and planned to visit in March. But the global pandemic was declared just days before he was set to leave. The seniors home cancelled all visitations.

“You wonder if you’re ever going to be able to see [your father] again,” said Simon van Norden. “We were really very worried.”

Fortunately, restrictions eased by the time his father’s birthday rolled around. Simon and his two sisters were able to celebrate with their dad in person, at a safe physical distance.

At 100 years of age, van Norden’s vision is impaired and walking can be a challenge, but he hasn’t lost his knack for telling stories about the past, nor his love for Dutch cheeses.

Not to mention, his sense of humour.