Oświęcim, 30 miles from Krakow, Poland has long been famous as the archeological site of an ancient Slavic settlement, or “gord.” The walled village was built as a center of trade for late bronze and early Iron Age farmers, and yet that proud history has been overshadowed by its more recent historical significance. Oświęcim– or as it is known in the German language – Auschwitz, was the scene of one of the most horrifying chapters in human history. Between 1940 and 1945, the three Nazi concentration camps located near Auschwitz were the scenes of the extermination of over 1.3 million Jews, along with Roma, Soviet soldiers, Jehovah’s Witnesses, homosexuals and others that Adolph Hitler’s Nazi regime deemed “untermenschen,” or “subhuman.” 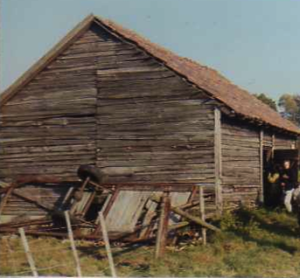 On June 11th, 1944, Magda Perlstein turned 17 years old. On the same day, the Hungarian teenager was forced to board a boxcar bound for Auschwitz, along with her family and Jewish neighbors. What followed for young Magda included unspeakable horrors at Auschwitz, followed by transport to Stadtallendorf, where Magda was forced to work in one of the largest ammunition factory in Germany.  Eventually, Magda escaped and was rescued by American G.I.s, narrowly avoiding death at the hands of her captors.

Now 89 years old, Magda continues to speak about her experience, working as a member of the Speaker’s Bureau of the Illinois Holocaust Museum & Education Center. She was kind enough to share a few thoughts with us in advance of her Cedar Rapids visit.
———

In the years leading up to your family’s imprisonment, what was your life like?

I had an absolutely normal, loving, religious family. I was pampered, I was spoiled. My parents owned a delicatessen and worked long hours, six days a week. It wasn’t an easy way of making a living, but they did what they could to support us in the best possible way.

Was childhood a carefree time for you, or did you have a sense of the danger that was approaching after Hitler’s invasion of Poland in the fall of 1939?

Keep in mind, that in 1939 I am a 12 year old preteen. I had no idea of the dangers to come. My first personal awareness came when I was 14. Hungary already had a horrendous anti-Jewish law that restricted Jewish enrollment in higher education to 1%. I am graduating middle school and ready to go to high school (which in Europe is much stricter–equivalent to junior college here). I was ready to go, my grades were pretty good, my father could pay for it…but I didn’t make the 1%. Keep in mind, I was a 14 year old girl who didn’t care that the world is falling apart, but I knew personally that something was wrong when I couldn’t go to school with my friends.

You were imprisoned– along with your family– on your 17th birthday. When you speak to the typical American high school students today, do you think that they can fathom what your life was like? How do they typically react?

After the Nazi occupation March 19, 1944 we were put in a ghetto and on my 17th birthday. My family and I boarded the overcrowded boxcar on the way to “the unknown”, which turned out to be Auschwitz.

The Students…It is remarkable how attentive and compassionate they are.  I receive many letters after my talk… as a result I notice how well they understood my message. Also, after my talk, I spend time answering their questions and this is the best gauge to realize how much they have learned. My grandchildren made a collection of many of the letters I have received. One writes “I could not imagine being an orphan.” Another wrote “I can’t imagine having my head shaved.” Now this is a young girl, putting herself in my place. Then there was this one, which is a classic… “I will be better to my brother.” They put themselves in the situation, which is my message!

It took 16 years for you to finally find your brother after immigrating to the United States in 1946.It is hard to imagine what that reunion was like. Do you remember the first things you said to each other? Can you describe the emotions you felt?

That is a beautiful story. My brother had been taken to serve in a Jewish labor force. We did not hear from him after 1944. At the end of the war, I am liberated, but I was still in Germany. Some young Hungarian men were traveling around the area, because there were still about 1000 of us in that 50 mile radius. Would you believe that one of the young men was my brother’s childhood friend?  I asked, “Have you heard about “Michael?” He said, “Yes! I saw him in Budapest Christmas of ‘44!” I could not believe this, because I thought all of the Budapest Jews were taken to Auschwitz, ending up in a horrible death. But it turns out that the Pope intervened with the Hungarian leader and stopped the deportation.

Now, I didn’t have a penny to my name, but by a miracle, the allies were coordinating trains to get people back to their home countries, and I managed to get on a train back to my hometown. With eager anticipation, I went to a Jewish Community Center where they had lists of who had made it, and who had not made it. I asked about my brother, and they said that there is good news and bad news. To the best of their knowledge, my brother is still alive. The bad news was, he is in a Russian prison.

Another miracle happened…. A chaplain at the Army base asked us if we had family around the world.  I said yes, I have two uncles and an aunt who had immigrated to Chicago in 1908. I only knew their names, and the city was Chicago. He gave the names to the Hebrew Immigrants Society in New York, and they found them!

I stayed there (in Hungary) through the winter, but in 1946, I got two affidavits that allowed entry to the US. Here I am, a young girl, two affidavits and no brother.  Finally, I left my brother’s affidavit with my cousins and left for the US. I heard from my brother finally in 1948 when he got out of the Russian prison, but it took until 1962 to get him to America, because of the Cold War.

I still see him in my mind’s eye as he was exiting that plane. My first impression was indescribable joy.  The feeling – because he was all that was left of my old life, in Europe.  The epitome of Joy. We were very, very close.

Thankfully, you were able to put your life back together, have a family and a successful career. How did the horrific events of your late teens affect your outlook as an adult? How were you able to put those events behind you?

I was blessed with a positive attitude. I see the cup as half full. The Holocaust belongs to history now. Over 72 years from the whole insanity. But we must NEVER FORGET… I believe that. We have the responsibility to alert the world – genocide can happen (again). It does not happen minute-to-minute. It builds gradually. And our children need to be conscious of the impending problem. And that is why we have to spend our time not in the rocking chair, but out in the field. We survivors who were destined to live.

You are here: Home » Magda Brown tells Her Story