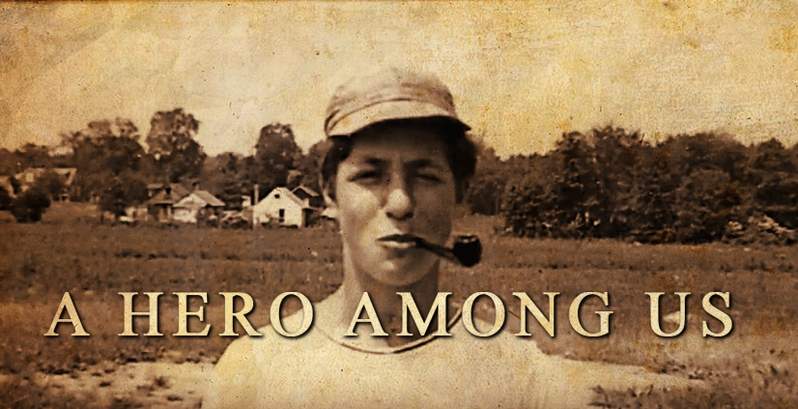 ‘I had to carry that in my heart forever’ 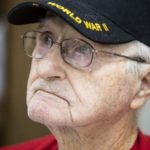 John Gualtier, a 91-year-old World War II Veteran, volunteers at the Veterans Affairs Hospital in Iowa City on May 23, 2017. Gualtier will be the subject of a film documenting his extraordinary life, including his service as a combat medic in World War II, when he liberated a concentration camp, as well as his life before and after his service. (Liz Zabel/The Gazette)

John Gualtier, a 91-year-old World War II veteran living in Vinton, was just 19 when he helped liberate the Gunskirchen Lager concentration camp in Austria on May 4, 1945.

It was just a year into his service as a combat medic that the 71st Infantry Division pulled into Gunskirchen. Today, Gualtier still can’t get the sights and smells from that day out of his head.

“Their eyes were sunk so far back into their heads, you could barely see them,” he said. “Ninety percent of them died right there.”

Inside the gates, Gualtier saw dead people lying in feces and urine. But some were still alive, sandwiched between the dead, he said.

The Gunskirchen camp opened in April 1945 and housed thousands of Hungarian Jews who were forced to work under horrible conditions that led to the rapid spread of diseases, according to the United States Holocaust Memorial Museum.

By the time American troops reached the camp, Nazi guards had fled, leaving 15,000 sick and starving prisoners among the dead.

“When the Germans knew Americans were coming, they tried to hide the evidence and dug trenches and buried people alive,” Gualtier said. “And it smelled. You could smell burned bodies. It still haunts me today — the smell of rotten flesh never leaves you.”

Gualtier recalled hand feeding a starving victim his rations piece by piece, lifting his head and holding him in his arms.

“He looked up and smiled at me,” Gualtier said. “Then he died in my arms.”

Gualtier went from “an 18-year-old boy to an old man overnight,” he said.

“I was never a kid again,” he continued. “I had to carry that in my heart forever.”

When he returned home, he said he “started having all kinds of trouble.”

“I couldn’t hold a job. I couldn’t stand to be inside and I couldn’t work nights,” he said. “I’d disappear three to four months at a time.”

In 1949, he attempted suicide for the first time, stabbing himself in the heart with a screwdriver.

He was admitted into a psychiatric facility and after “straightening out a bit,” he said he received a letter from the government sending him back to war — this time to Korea. After another year in the service, Gualtier was medically discharged.

A banner for the documentary film, “A Hero Among Us.”

In 1961, he tried to commit suicide a second time and again ended up in a mental hospital, he said.

Since 1991, Gualtier said he’s “come along pretty good,” partly due to the help of his now deceased wife, who was a psychiatric nurse and knew how to help him when he was struggling.

“If not for her, I probably wouldn’t be here today,” he said. “She could see things coming and knew how to treat me.”

Up until 1970, Gualtier said he wouldn’t tell people he was in the service because he didn’t want to talk about it.

Today, although he continues to struggle with nightmares and overall mental health, Gualtier shares his story in support groups, in schools, museums and other places around the state. He also volunteers at the Veterans Affairs Hospital in Iowa City.

Soon, Gualtier’s story — of which there is much, much more — may be shared in the documentary “A Hero Among Us” by local filmmaker Brent Watkins.

Watkins created a short feature about Gualtier for the Thaler Holocaust Memorial Fund’s website. After a few short interviews, Watkins said he realized he had “a really amazing story” on his hands.

“The more I dug into the story, the more I just thought the entire story needed to be told,” he said.

Watkins is fundraising and developing partnerships for the film. The public is invited to a June 17 fundraiser at the Vinton Legion Hall.

The film will tell the story of Gualtier’s life.

“It’s a redemption story, about how he found his way onto the path of healing through the power of telling his story,” he continued. “Over time he found the more he shared his story, the better he felt. He’s become a source of encouragement for other veterans and a man who, in addition to giving so much on the battlefield and being literally a decorated war hero, has continued — once he was coaxed out of his isolation — to serve others who are facing similar mental health issues. … It’s been an honor for me to know him and tell his story.”

What: Fundraiser for “A Hero Among Us”

Details: Help raise money for the film, “A Hero Among Us,” which features John Gualtier, a 91-year-old World War II veteran living in Vinton. The short featurette will be shown and a meal of lasagna, garlic bread, salad and cake will be served. There also will be a silent auction.