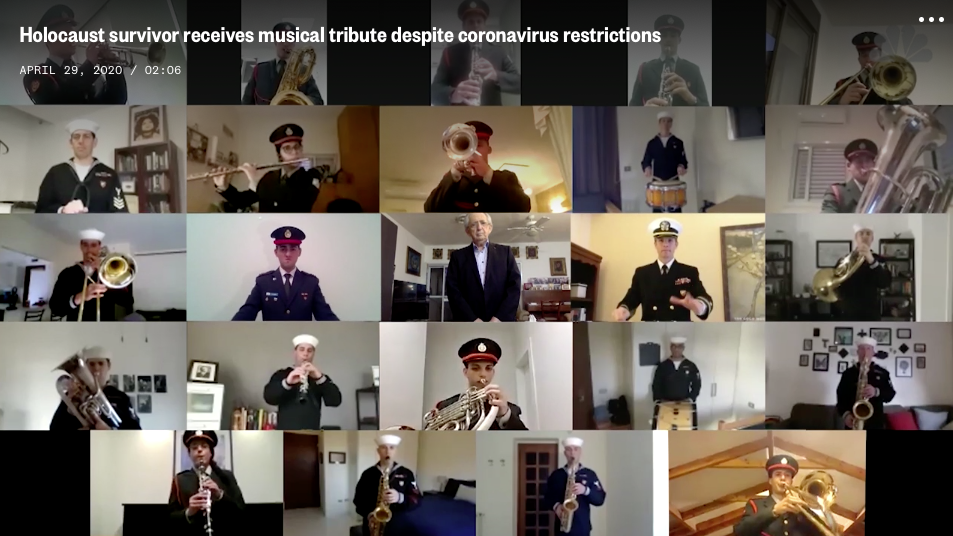 “The most important thing in life is life itself,” Holocaust survivor Abba Naor told NBC News.

TEL AVIV — A U.S. military band surprised a Holocaust survivor this week by playing the Israeli national anthem to him via Zoom to mark the 75th anniversary of his liberation by American forces from a Nazi concentration camp in Germany.

Abba Naor, 92, was the youngest survivor of Dachau concentration camp outside Munich. He was liberated aged 17 after spending four years in the camp.

“Watching the Americans made me feel very good, and it gave me the opportunity to say thank you for liberating me, this was a big honor,” Naor told NBC News after the Zoom call in which United States service members played the Israeli national anthem alongside members of the Israeli Defense Forces.

On April 29, 1945 the U.S. armed forces liberated the Nazi concentration camp of Dachau and 75 years later Israel is also celebrating Wednesday its 72nd Independence Day. World leaders gathered in Jerusalem in January to take part in a diplomatic meeting to commemorate the Holocaust and battle anti-Semitism, 75 years after the liberation of Auschwitz.

Naor said that in actual fact he was liberated on May 2, 1945. Several days before on April 25, he and other survivors of Dachau were forced to march without food and water for days, while anyone that couldn’t walk was shot dead, he said.

“The Americans gave us a new life and you can’t forget this, we’re not forgetting,” he added. “They brought us back to life, if they only came one day later no one would be alive and this is something you can’t forget.”

After he was eventually liberated, Naor, originally from Lithuania, moved to Israel where he fought in the country’s independence in 1948 against Arab states. He later worked for Mossad, Israel’s national intelligence agency.

For the past 20 years, Naor has worked to try and keep the memory of the Holocaust alive often traveling back to Dachau and giving between 80 to 100 lectures each year to the German army, school children and to universities.

He was supposed to mark the 75th anniversary of the camp’s liberation in Dachau along with U.S. army veterans who liberated the camp, but the event was called off because of the coronavirus pandemic. Hence, the call with the U.S. military band via Zoom.

“The most important thing in life is life itself, it’s a gift given only once and you should do the best you can from it,” he told NBC News.

“You can also make something good from bad and I think I’m a bit of an example to that.”