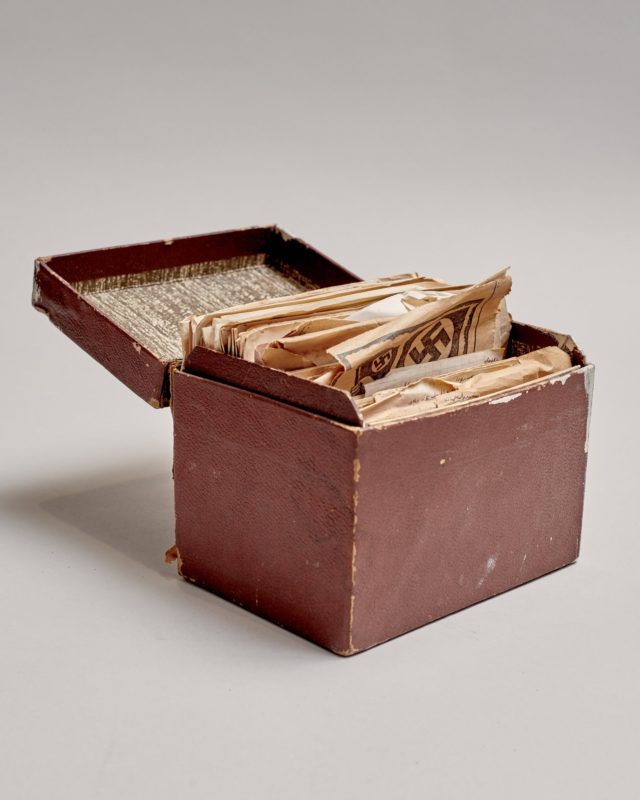 They didn’t wait for the war to end.

In August 1944, as soon as Soviet troops swept the Nazis out of eastern Poland, a group of Jewish intellectuals rushed to cities like Lublin and Lodz to begin collecting and recording, scouring for any trace of the still fresh horror that had taken their own loved ones. They wanted evidence.

Among them was Nachman Blumental, a philologist obsessed with the uses and misuses of language. He had escaped into the Soviet Union in 1939 and returned to find that his wife, Maria, and young son, Ariel, had been killed. Places once teeming with Jewish life were gutted. His whole world had effectively vanished.

To make some sense of it all, Blumental got to work. Along with an assortment of historians, ethnographers and linguists, he established the Central Jewish Historical Commission. They transcribed 3,000 survivor testimonies between 1944 and 1947, scavenged for Nazi paperwork in abandoned Gestapo offices and meticulously preserved fragments of day-to-day ghetto life — a child’s school notebook or a food ration ticket.

And Blumental, from the beginning, gathered words.

In every Nazi document he came across, he circled and underlined innocuous terms like “abgang” (exit) or “evakuierung” (evacuation). He knew what these words actually meant when they appeared in memos and bureaucratic forms: They were euphemisms for death. A mission of his own took shape: to reveal the ways the Nazis had used the German language to obscure the mechanics of mass murder and make genocide more palatable to themselves.

We now have a glimpse into the mind of Blumental and his fellow survivor historians. The YIVO Institute for Jewish Research, which contains the largest Holocaust collection in North America, acquired Blumental’s personal papers in February, composed of over 200,000 documents. According to YIVO’s director, Jonathan Brent, it is “one of the last great remaining archives of the Holocaust.”

Its significance is its range, 30 boxes of material that had gathered dust and been chewed on by mice over the years since Blumental’s death in 1983. Unpacked now for the first time, they contain his postwar collections — Hitler stamps and pieces of anti-Semitic propaganda. One thick folder is filled with hundreds of previously unseen poems and songs Jews composed in the ghettos and camps, which he transcribed from survivors. Some items are more visceral, like a piece of leather from his dead son’s shoe.

But the artifacts are dwarfed by thousands of note cards covered in minuscule cursive handwriting. Each one contains a few sentences of Nazi writing and the etymology of a specific German word, both its original meaning and its distorted one. This was research for Blumental’s Orwellian undertaking: a Nazi dictionary.

“For him, coping with the experience of the war was both personal and extra-personal,” Brent said. “And his papers, as a result, contain the most intimate thing imaginable and essentially the linguistic grid of Nazism.”

Blumental received a master’s degree from Warsaw University with a thesis called “On Metaphor” and he knew nearly a dozen languages, from Hebrew to French to Ukrainian. He saw words and their usage as the clearest window into human culture. After the war, he wandered amid the ruins like a folklorist, an austere man in owlish glasses, compiling the Yiddish expressions and jokes that circulated among Polish Jews facing death.

His dictionary of Nazi words was, at one level, a desperate undertaking: If he could reverse-engineer the language, he might be able to figure out how everything he had known and loved had been destroyed. But the project had other, more practical functions as well. He hoped that such a lexicon would be useful for prosecutors during the many postwar trials of the late 1940s — three of which Blumental attended as an expert witness, including the trial of Rudolf Höss, the Auschwitz camp commandant. And he was aiming, too, at the future, for a time when the documentary evidence of the genocide might be indecipherable without some kind of linguistic key.

In 1947, he published “Slowa niewinne” (“Innocent Words”), covering letters A through I, the first of what he envisioned to be two volumes of his dictionary. Coincidently, that same year, another survivor philologist, Viktor Klemperer, published “Language of the Third Reich,” a similar enterprise dissecting Nazi usage. Blumental never completed his second volume, and his papers show how the project metastasized over time, especially as he gained access to fresh source material from newly opened Nazi archives.

Blumental, like the other members of the commission, carried out his postwar research scientifically and methodically. But this was never just detached historical inquiry. It was also about memorializing the dead.

“Survivor historians like Blumental were caught between the ‘I’ and the ‘We,’ mediating between their own lived experience and the communities to which they belonged,” said Katrin Stoll, a German Holocaust scholar who has been helping to process the Blumental papers. “They each had to figure out how to relate to their own experiences and the larger experience of the war. In the case of Nachman Blumental, he opted for separation.”

Among his papers, there is a chilling example of how his analytical gaze collided with his personal pain. In 1948, he traveled to the village where Maria and Ariel were killed in June 1943. Blumental arrived with his notebook, intent on a forensic investigation, interviewing multiple villagers who witnessed the murder. His wife was passing as a Catholic woman and hiding with their son when they were arrested by Polish policemen. A Nazi officer then led them to the local Jewish cemetery and shot them.

In his handwritten notes, Blumental transcribed, word for word, the various accounts of the killing, an event he was told “everybody was watching.” Reporting on what a bricklayer who lived by the cemetery saw, he wrote: “She asked to be shot first. She did not want to look at the death of her son. She did not want to undress. The child started to cry: ‘Mom, mom, where is mommy.’ He shot. He shot at the child, he shot once and injured him, he shot a second time and killed him. The child was screaming. My wife was buried without clothes. My child with clothes on.”

As a result of his investigation, the policemen who arrested Maria and Ariel were indicted in 1950. Blumental also exhumed their bodies and buried them in the Jewish cemetery in Warsaw.

The melding of commemoration and historical research made later professional historians dismissive of the commission’s work. Scholars like Raul Hilberg and Lucy Dawidowicz — the first generation to write books about the genocide in the 1960s — regarded the early survivor historians as tainted by their proximity to the events and the victims. And grasping the lived experience of the Holocaust, as the commission set out to do, was not as important to them as understanding the motives and methods of the perpetrators.

“It makes some sense that academic research started with the Nazi regime and ideology, but it went for decades not looking at the Jewish experiences, Jewish sources,” said Laura Jockusch, a professor of Holocaust studies at Brandeis University and the author of “Collect and Record!: Jewish Holocaust Documentation in Early Postwar Europe.” Today, she said, “we can see the value in the types of questions the commission raised as well as the sources they studied.”

The commission only lasted a few years before being dissolved by the Polish government who created the Jewish Historical Institute in 1947, centralizing all Holocaust research. Blumental was appointed its first director. But the work was constrained by the Communist Party’s demands, and most of the original members left Poland, including Blumental, who immigrated to Israel in 1950. For the rest of his life, he devoted himself to Holocaust research, working at a number of institutions, including Yad Vashem, Israel’s official Holocaust memorial center.

His personal papers, which YIVO plans to digitize and make available, were acquired from Miron Blumental, Blumental’s son who was born in 1954, 11 years to the day after Ariel Blumental was killed. It’s a coincidence that has haunted Miron. Over the past three decades, his father’s papers have moved with him from Israel to London to Vancouver, where he lives and works as an international tax lawyer.

What he sees in the files and thousands of note cards is a man battling his own helplessness, grasping at any shred of evidence, even the most ephemeral of things — the words.

“Everything he knew had disappeared,” Miron said. “He was hanging on to all these details as the proof that they existed. That was his memorial, what he could do. He couldn’t achieve anything else, in real terms. He couldn’t bring any of it back.”

Follow New York Times Books on Facebook, Twitter and Instagram, sign up for our newsletter or our literary calendar. And listen to us on the Book Review podcast.A version of this article appears in print on June 24, 2019, on Page C1 of the New York edition with the headline: This Man Cracked Nazi Doublespeak. Order Reprints | Today’s Paper | Subscribe