Ron Levine presents The Mogen David of Barth on the Baltic 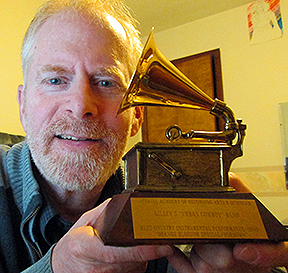 Sunday, June 7th at 2 PM, Temple Judah in Cedar Rapids will host a presentation entitled “The Mogen David of Barth on the Baltic” by long-time temple member Ron Levine. Ron will tell the story of his father’s imprisonment in the Nazi prisoner of war camp near Barth (a German port city on the Baltic Sea) and his clandestine Shabbat and High Holy Day services. Held in the face of grave danger from his Nazi captors, the services utilized a hand made Star of David (or in Hebrew “Mogen David”) that survives to this day.

Ron was kind enough to answer a few questions about his upcoming talk.

Ron, before we get into the details of your presentation, please tell us a little about yourself. Readers may not know about your impressive career as a professional musician!
I spent the first part of my life as a professional musician touring and recording with such artists as Kenny Rogers, Dottie West, Lobo, Michael Martin Murphy, Conway Twitty, Mickey Gilley, Johnny Lee and many other lesser-known artists. I won a Grammy Award for playing Orange Blossom Special/Hoedown on the soundtrack for the movie, ‘Urban Cowboy’. After I got diagnosed with Multiple Sclerosis I had to change careers fearing that I may not be able to play the violin again. Since then I’ve lost and regained my ability to play several times. During two different periods when I could play I recorded two CDs, ‘Storm Dancer’ and ‘I’m Only Sleeping’. 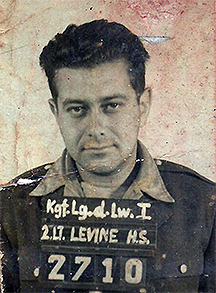 Your father, Henry Sanford Levine, served as an airman in World War II. Where was your father born and raised, and what was his life like in the years leading up to his imprisonment?
My Dad was born and raised in Syracuse, New York. He was given an orthodox Jewish education as a child. He received a Law degree from Syracuse University. Before enlisting in the Army Air Corps in World War II he was an attorney in Syracuse.

How did he come to be imprisoned at the infamous Stalag Luft 1?
He was a navigator on a B-17. His B-17 was shot down over Germany. He parachuted and landed on a farm where he was brought to a farmhouse where he thought he would be safe. It turned out that the farmhouse was a Gestapo headquarters. After seven days of solitary confinement and threats of reprisal he was interrogated. He only gave his name, rank and serial number. From there he was moved to Stalag Luft 1, a prison camp for officers who were flyers, thus the word Luft. Stalag means prisoner of war camp. 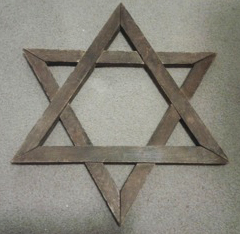 Without giving away too many details of the presentation itself, tell us a little about the Mogen David, how it came to be, and its significance.
When I was 5 years old I used to play with this Mogen David. Dad told me that he made it in prison camp. He also told me that he held Jewish Services in prison camp. This wooden Mogen David is made of 2 interlocking triangles that can be easily separated, triangles meaning nothing to a Nazi guard. They could be easily put together to form the Mogen David for the clandestine Jewish Services. The Mogen David is the symbol of the Jewish People.

Your brother, Richard, has written a book about your father’s experience, and you have actually written a musical composition inspired by the story of the Mogen David. Can you talk a little about your artistic process, and your collaboration with your brother? Will you be performing the piece at your Temple Judah presentation?
My brother’s book inspired me to write the music and add it to a video presentation. The music will be played as people are entering Temple Judah for the presentation. Five minutes of the video will be played in the middle of the lecture. I wrote the music after I read the first draft of my brother’s book.

It’s difficult to explain my artistic process. In this case the music just came to me after reading the words and the story. While putting together the video from pictures of the prison camp the intro, climax, ending and all the parts in between just came into place. I use small parts of Jewish melodies in the music.

As the number of people who directly experienced the tragedy of World War II dwindles, do you feel that it is important for those of us of the next generation to keep their stories alive? What sort of responses do you get from younger people to your father’s story?
It is very important to keep the stories alive. We need to make sure that it never happens again. And this is not just to the Jews but all races and religions.

Younger people have asked me how the POWs were treated and how my Dad was able to get materials and tools to make the Mogen David. They ask me if they were beaten or otherwise mistreated.

How can others help to keep the memory of the Holocaust alive?
As difficult as it is to talk about, the history needs to be discussed, especially with younger people so they know the horrors of the murder of 6 million Jews, millions more Russians, gypsies and others. They need to know the history of how and why it happened so they can recognize signs where it could happen again, and make sure that it doesn’t, to any races or religions. Jews have the State of Israel. The reasons why Israel exists need to be taught, starting in elementary school. They need to know why Israel needs to survive.

To see and hear more about “The Mogen David of Barth on the Baltic,” join us Sunday, June 7th at 2 PM, at Temple Judah in Cedar Rapids Iowa. The presentation is open to the public and attending is free of charge.