Holocaust survivor recalls the lie that saved his life 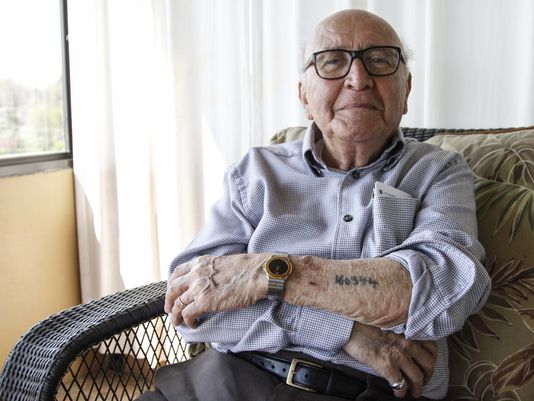 David Wolnerman, 88 of Des Moines, is one of the few remaining Holocaust survivors currently living in central Iowa. At the age of 13 he was taken from his home in Poland to Auschwitz where the number 160344 was tattooed on his arm, he was liberated from the Dachau concentration camp in 1945. (Photo: Kelsey Kremer/The Register)

At the party, people asked to snap a photo of the tattoo on his left forearm.

Each time he pulled up his sleeve, David Wolnerman’s unease faded further, as had the blurry blue numbers — 160344.

For a long time, he didn’t show the numbers that the Nazis put on his arm in 1940 at Auschwitz or tell what happened afterward. But he is 88, and he and his wife, Jennie, are the last known survivors of the Nazi concentration camps left in central Iowa.

He wants people to see it now, including the 12-year-old girl from West Des Moines who wrote about his experiences in “A Lucky Lie,” a book written for students that was unveiled at the April 16 party in Waukee.

The hidden meaning behind that number, he told young author Sydney Pearl, came to him only later in life. Add the individual numbers together and they equal 18.

Wolnerman had lied when he stood in line in 1940. Josef Mengele, the Nazi nicknamed “The Angel of Death,” stood before him with a stick, pointing it to a line to the left or right as each person approached him.

Wolnerman, then 13, noticed that the old, young and sickly were in a line to the left. When Mengele asked his age, Wolnerman said, “I am 18.”

Mengele pointed his stick to the right.

The left line was eventually sent to the gas chambers.

“I didn’t have brains to say this,” said Wolnerman on a recent afternoon in his condominium off Fleur Drive in Des Moines. “I believe God told me. If not, I wouldn’t be here.”

In Hebrew, the number 18 is symbolized as chai, or “life.” At 18, he was liberated from the camp.

And what a life. All these years, he has acutely understood the slim margin between death and life. It affected every day, the way he worked and the spoiled food he couldn’t throw away because he couldn’t bear to waste it.

In the concentration camp, they didn’t talk much because they didn’t know what was going on in the world or even know what day or year it was.

“We had no mind. You had mind like cow,” Wolnerman said in his broken English. “The only thing we could think was bread, bread, bread.”

They got two slices a day. If a boy took the bread of another, a shovel handle was held to his throat, he said, because stealing bread was like a death sentence to the theft victim.

He worked in the crematorium and gas chambers and watched them “throw the live ones in the oven.” He loaded cement blocks on trucks, and he prayed. He listened to boys tell of their castrations and watched people “die like flies.”

He wondered about his mother back in Modrzejow, Poland, only about 30 miles from Auschwitz. His father had died three months before the war, and when the Nazis came, he was told that to save his family he must report to the work camp. He would later find out that his mother, Hannah, brother Abraham and sister Gertrude died in concentration camps.

Inside, he could really think only of survival. He moved from one camp to another — Birkenau to Theresienstadt to Dachau and others — and once a lice infestation grew so bad that he contracted typhus.

At one point, with no food or medicine or water, he was waiting to die in a wooden bunk without straw, beside another sick boy. One day, a Nazi SS soldier appeared at the bunk, lifted up the boy and threw him out the window.

“I thought he was sleeping,” Wolnerman said. “But I had been lying next to a boy that was dead for two weeks.”

Somehow — by God’s grace, he thinks — he survived.

His group in camp followed the counsel of an older boy, who one day turned to them all with a question: What would you do if the Germans said you could have all the bread you want, but we will shoot you after you eat it?

“Every boy said, ‘Then give me bread and shoot me,’ ” Wolnerman recalled. “Because I never thought I’d be free.”

In later years, he often thought about the older boy, who had become a father figure to him because he was wise to the ways of the camp. He said he would eat the bread, too.

He was freed by American soldiers on April 29, 1945. He was only 80 pounds, he said. The soldiers gave them rations, and the boys shoveled them down and threw up all night, their digestive systems so unaccustomed to food.

“They saved my life. I never forgot this.”

“They saved my life. I never forgot this,” Wolnerman said. “I was like a brother to them. (Later in life) two nuns from Africa were brought to my house, and they came back to have coffee and cookies and pray with me and my wife. I never forget the nuns. Every day for five years, I go to nuns.”

During his five years in postwar Germany, he met his wife, Jennie, at the displaced persons camp. She had survived the concentration camp because a female Nazi guard “took a liking to her” and brought her a bowl of soup every day, which she shared a spoon at a time with her fellow prisoners, he said. The guard even offered her a chance to leave, but she wouldn’t abandon her friends.

As his recovery continued for two years, one day he met another survivor who was an old friend of his brother’s.

“I don’t believe in God anymore,” the man told Wolnerman, who was surprised because he thought the man would one day be a rabbi. “Where was God when they were throwing away the kids alive, 5 months old, 1 year old?”

“I believe in God more than I ever did,” Wolnerman told him, then recounted his near-death experiences in the camp. “So how can somebody say that I survived all this if they don’t believe in nothing. It had to be God.

“I don’t care what you believe, but believe.”

David and Jennie Wolnerman came to America in 1950. He didn’t speak English, but they began work in a printing plant in Cleveland because the owner knew German. On his first Thanksgiving, the couple went to the company party. They both stared at their plates of turkey and sweet potatoes. They had never seen the food before and were too nervous to eat it. They stopped for a hamburger on the way home.

They soon moved nearer to Wolnerman’s surviving immediate family member, his sister Bluma, in Gary, Ind., and got into the grocery business with Bluma’s husband, Josef.

David Wolnerman worked seven days a week without a vacation for the next 42 years. The concentration camp stayed with him mentally.

“You guys tell me this normal?” he asked. “Work 42 years with no vacation. This normal?”

He was obsessed with wanting for his two sons what he never had, an education. He had been through only the third grade.

“This is the best country in the world,” he told his sons. “You should get up in the morning and kiss the ground.”

“My boys laughed. ‘Look at the old man talking.’ Now they know.”

Michael Wolnerman and his brother, Allen, went on to pharmacy school at Drake University in Des Moines. His parents followed them here in 1983 after his father’s heart problems forced his retirement.

“I learned from him that you can survive anything, and I learned about perseverance,” said Michael, 52, of Des Moines.

But for years he didn’t know much about that number on his father’s arm.

“He would always joke that it was the number of his old girlfriend,” Michael said.

His father spent a few years living near Miami to avoid the cold of Iowa before returning two years ago. Walking the streets there, he would see a piece of food lying on the sidewalk, and it made him sick. He would pick it up and place it for the birds to see and eat so it didn’t go to waste.

One day at a gathering in Florida, he encountered a man, and they exchanged pleasantries. The man told him his voice was familiar. Was his name David?

Wolnerman said it was and hurriedly parted, unsure how the man knew his name.

Wolnerman stopped in his tracks. The numbers on his arm added up to 18. When he heard the number, he realized the man was the older boy from the concentration camp who had been like a father figure to him.

They didn’t talk about the time in camp. They both knew what they had seen.

Wolnerman was nervous for the party at the Caspe Terrace in Waukee earlier this month. He had been taking care of his wife in Des Moines for two years as her Alzheimer’s disease advanced. His son would come to his condo and throw out the molded bread he couldn’t bear to throw away.

He barely left the place, even as friends urged him to. He grew teary-eyed.

He wanted everything to be perfect for the party. So many people were coming, family members and friends and the young author who told his story.

The Holocaust remembrance event was put on by the Jewish Federation and local congregations to honor Wolnerman with the publication of the book. Author Pearl was chosen to tell his story by A Book by Me, an Illinois company that taps children to tell stories of Jewish survivors for other children. Its books are part of history lessons in schools nationwide. Pearl said she learned a lot about life from Wolnerman.

“I learned how to stay strong and not give up. And that happiness comes from within you.”

“I learned how to stay strong and not give up,” she said. “And that happiness comes from within you.”

Wolnerman greeted people that he had met as he began to talk to churches and other groups about the Holocaust.

Among them was Maj. Gen. Tim Orr of the Iowa National Guard. Wolnerman met Orr not long before to discuss his experiences. He was so nervous before their meeting that he didn’t sleep or eat for two days.

Orr gave him a gold medallion, and Wolnerman fished it out of his pocket to show off. He carries it with him always. It is engraved with the words “Warrior ready.”

“For a general like that to give this to a guy like me?” Wolnerman says, shaking his head. “He came to the party and showed me his, just like mine. It was in his pocket, too!”

With equal humility, he accepts his family’s place: Jewish Federation officials say they are the last Holocaust survivors in Des Moines, where once there were 50, and perhaps the state’s last concentration camp survivors.

He is left to tell everyone not to be angry. It’s been too long, the “bad people” are dead, and he has lived a good life.

You are here: Home » Holocaust survivor recalls the lie that saved his life