At the MFA, a difficult homecoming for a Holocaust survivor

Hounded by memories of ghetto life, Arie Kasiarz hadn’t been able to sleep.

He rarely talked about his hardships during the war, once fainting at the United States Holocaust Memorial Museum. The Philadelphian preferred to focus on the living, so rising from his hotel bed he bathed before dawn, dressed carefully in a crisp brown blazer, and was standing at the ready when his son came to collect him.

Now, as rain poured outside the Museum of Fine Arts, Kasiarz, 90, clutched some of those memories in a white plastic bag: a pair of tattered photographs from his life during World War II. He’d traveled here to brave “Memory Unearthed,” an exhibition of Henryk Ross’s photographs from Poland’s Lodz Ghetto, where Kasiarz, a Jew, had lived during the German occupation.“I get sick if the memory comes back to me,” said Kasiarz, who entered the ghetto with his parents and two sisters when he was 12. “I can forget what I ate yesterday, but I can’t forget what I got through in the ghetto.”

Those memories include being chased from his family’s well-appointed home in central Lodz to a one-room apartment in the ghetto where they were sealed off from the rest of the city with barbed wire fence. The Germans forbade them from taking money or even clothes. Neighbors disappeared. Death was common and hunger was constant. His mother used grass to make soup. Kasiarz once stole a potato from the depot where he worked, cutting it into slices that he hid under his pants.

“I was a crook,” he said. “If they’d checked us I’d have gone to jail, but people took a chance.”

To illustrate the point, Kasiarz reached into his plastic bag to present the worn remains of his internment at Lodz: A jagged photograph, its top torn in a dramatic “V,” that shows a teenage Kasiarz kneeling with his fellow workers behind a mound of potatoes. In another group portrait — a near compositional twin to one in the exhibition — Kasiarz stands with other workers by a horse.

Could his images have been taken by Ross?

“It’s certainly possible,” said MFA curator of photographs Kristen Gresh, who organized the Boston show and accompanied him during the visit.

Like Kasiarz, Ross was one of just 877 survivors in the Lodz Ghetto, which housed more than 160,000 people during Germany’s World War II occupation of Poland. As a photojournalist, Ross was compelled by the Nazis to serve as one of the ghetto’s official photographers, producing photo IDs for Jews as well as German propaganda about the ghetto, which had a Jewish Council and police force to enforce Nazi policies.

Ross meanwhile documented the bleak realities of ghetto life, surreptitiously producing a series of more than 6,000 images that show Jews being deported, grim food distribution, and death in streets, among other things. 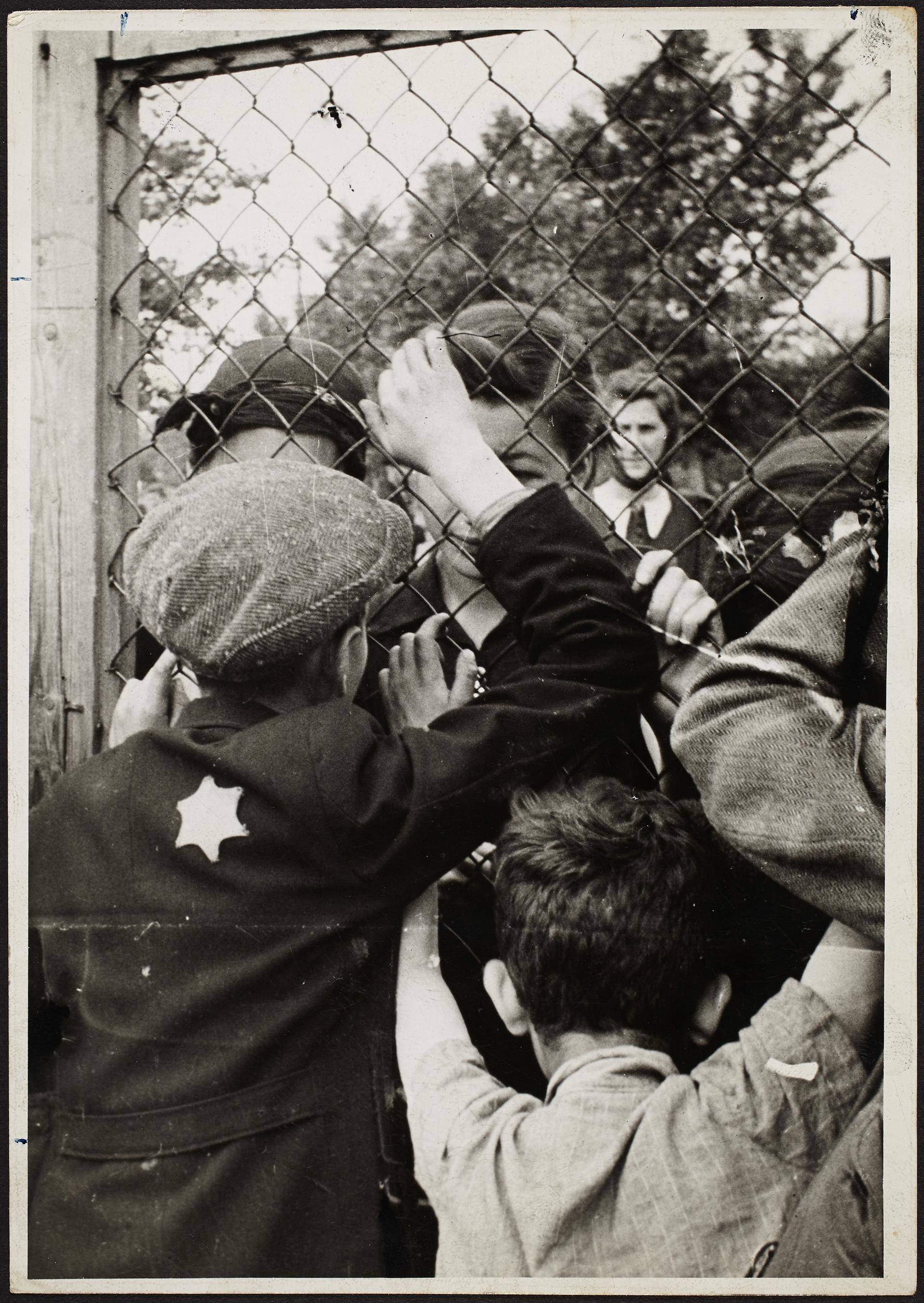 Ross’s photo of children talking through the fence of a prison in the Lodz Ghetto prior to deportation, from the MFA exhibit.

Ross hid his negatives in advance of Poland’s liberation, later returning to Lodz to retrieve them.

“I buried my negatives in the ground in order that there should be some record of our tragedy,” he said before his death in 1991. “I was anticipating the total destruction of Polish Jewry.”

‘I get sick if the memory comes back to me. I can forget what I ate yesterday, but I can’t forget what I got through in the ghetto.’

As one of the ghetto’s last remaining inhabitants, Kasiarz was pressed into cleaning service as Russian troops advanced. His duty: Use a human-drawn wagon to remove fecal waste from the ghetto.

“They made us to be horses,” he said in thickly accented English. “They put a big barrel in the boot of a wagon, and we had to go in the toilets and put it in the barrel.”

Kasiarz bounced around Europe following the war, living in Poland, briefly attending school in Switzerland, opening nightclubs in Germany, and fighting for the Israeli Army before emigrating to the United States in 1958. He ultimately made his home in Philadelphia, where he was the part-owner of a meat packing company and raised two sons with his wife, Doris.

Today, Kasiarz, whose formal education was cut short at age 12 by the war, is an affable man, given to holding court and immensely proud of his successful son David, an executive at American Express.

“If I’m going to have children, they’re going to be educated,” he said. “They must have what I missed. That’s why I’m a happy 90-year-old man.”

David Kasiarz, who joined his parents in Boston along with his own family, said the trip was part of an effort to understand his father’s life.

“We wanted him to share his story with the children — his grandchildren,” said David Kasiarz, who organized the trip before the show closes July 30. “We felt like it was unfinished. He’s always kept it in, and we did not want to have any regrets.”

Accompanied by an entourage of family and curators, Kasiarz drew a crowd as he walked through the exhibition.

Inspecting a series of photographs featuring Mordechai Chaim Rumkowski, whom the Nazis installed as head of the ghetto’s Jewish Council before shipping him to Auschwitz, Kasiarz compared him to the American gangster Al Capone.

Did he resent the Jewish police in the ghetto?

As Kasiarz moved through the images, Abbie Fuksman of Atlanta hugged him after explaining that her parents were both from Lodz, her mother a former resident of the ghetto. Stuart and Paula Lefkowitz of New Jersey later approached with a portrait of Paula’s grandfather, a synagogue cantor who died in the ghetto. Did Kasiarz know him?

“I was a 12-year-old kid,” Kasiarz said when he didn’t recognize the bearded man in the photo. “I see the picture, I cry.”

Buffeted by the images, Kasiarz was caught short when a curator directed him to a suite of photographs showing young children yoked to a filthy wagon, a barrel atop it: the fecal workers.

“I can’t see this picture,” Kasiarz said, his voice breaking as he took a seat.

He later explained that similar images had caused him to faint at the US Holocaust Museum.

“What can I tell you?” he asked. “Life has to go on. You have to tell it to our children, but sometimes it’s hard to explain.” 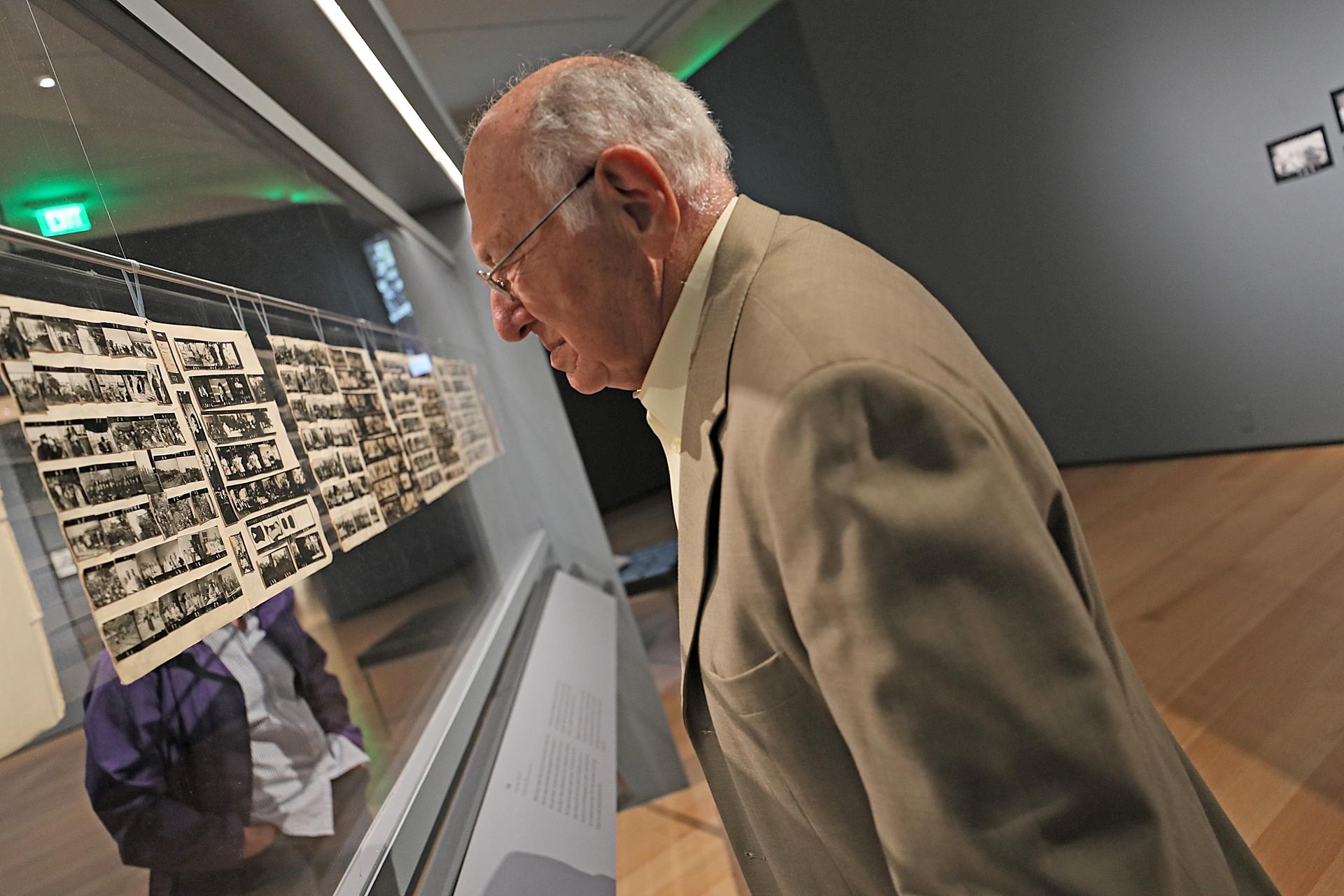 Posted from the Boston Globe