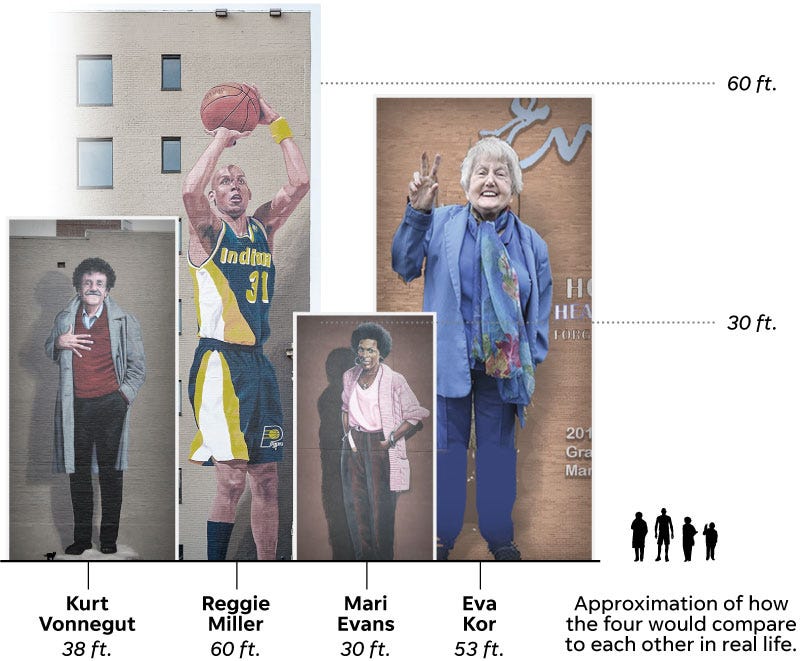 Within a few weeks, Holocaust survivor and forgiveness advocate Eva Mozes Kor will be immortalized by a mural on the side of the 500 Festival Building, taking her place alongside other local luminaries such as Reggie Miller, Kurt Vonnegut, and Mari Evans.

Kor, an international figure and advocate for hope, died in 2019 at the age of 85.

On Friday, Kor’s son, Alex, alongside painter Pamela Bliss, cast the first strokes of what will soon be a 53-foot-tall portrait of Kor, smiling and flashing a peace sign, with her signature message, “hope, healing, and forgiveness” at her side.

Alex Kor, the son of Eva Mozes Kor, a Holocaust survivor and forgiveness advocate, has the honor of painting some of the first brush strokes on a mural of his mother by artist Pamela Bliss, in Indianapolis, Friday, Oct. 9, 2020. The mural of Kor, will be painted on the side of the 500 Festival Building, 21 Virginia Avenue.MICHELLE PEMBERTON/INDYSTAR

The mural is scheduled to be finished by the end of November. The building is at 21 Virginia Ave. downtown.

By no coincidence, Kor’s mural will be the second-largest of Bliss’ portraits in Indianapolis –– the people who commissioned the painting wanted it to be “larger than life.”

“She stood 4’9” in real life,” said Ted Green, a documentary filmmaker who followed Kor for years and helped initiate the mural, “but she was a giant.”

Alex Kor hopes the painting will serve as a way to give his mother a voice even after her passing. He and the others involved with the mural want it to spread hope throughout downtown Indianapolis, especially during a year of social and political tension.

“This is my effort, along with so many other people, to kind of extend my mom’s legacy,” Kor said. “Quite frankly, with the social unrest we’ve had here in the United States, particularly in downtown Indianapolis, I hope my mom’s mural is a beacon of light.”

Who is Eva Kor?

Kor was born to a Jewish family on Jan. 31, 1934, in northern Transylvania, which was at the time part of Romania, but later fell under German military occupation in World War II. Kor and her family were deported to Auschwitz in 1944.

Her mother, father and two older sisters were killed in a gas chamber, but Eva and her twin sister, Miriam were chosen as subjects for experimentation by the Nazi “Angel of Death” Dr. Josef Mengele. Mengele tortured the twins for months, injecting them with mixtures of germs.

Decades later, Kor found a way to forgive him, and spent the rest of her life encouraging others to do the same.

“She’s really helped a lot of people overcome adversity, overcome tragedies, and try to forgive someone that wronged them,” her son said.

Kor and her sister created a nonprofit organization, Candles (Children of Auschwitz — Nazi Deadly Lab Experiments Survivors) in 1984, after finding more than 100 other twins who had been tortured by Mengele, in hopes of connecting after so many years. In 1995, she opened the Candles Holocaust Museum and Education Center in Terre Haute.

That same year, Kor publicly forgave the Nazis when she returned to Auschwitz on the 50th anniversary of the liberation. From then on, Kor dedicated her life to spreading her message.

“After what she went through at a young age, and what she survived and dealt with even for years to come, she always had this message,” said John Abrams, a close friend of Kor who helped commission the mural. “She spread it like a pied piper to young people. For them to learn that there’s hope and that you can heal, and that you can forgive, is a life message that is very important.”

In the photo the mural is based off of, Kor is smiling, wearing her distinctive monochromatic blue outfit, and making a peace sign.

A rendering of the mural to honor Eva Kor on the 500 Festival building in downtown Indianapolis. The mural will be painted by artist Pamela Bliss, based on a photo by Mika Brown.RENDERING COURTESY OF PAMELA BLISS

Behind her, though not visible in the mural, are the Auschwitz blood labs, where she and her twin sister were subjected to torture for so many years.

“There she is, standing outside this room where she was tortured when she was 10 years old,” Green said. “At the time she took the picture she was probably 83 years old, and there she is. She’s beaming and she’s proud.”

Everyone involved in the mural hopes that it will add to downtown’s culture. With social and political unrest peaking over the summer, and a global pandemic that has rocked the nation since the spring, they figure everyone could use a bit of hope.

“One of my mom’s biggest heroes was Martin Luther King,” Kor said. “I think my mom might serve as a way to unite the community here in Indianapolis –– whatever color, whatever religious background, whatever ethnic background –– and try to make our city stronger.”

Governor Eric Holcomb named Kor the recipient of the 2017 Sachem, the state’s highest honor, after which they became fast friends. He, too, said he hopes the mural will be a reminder of Kor’s message.

“Eva has left an everlasting impact on Hoosiers, our country and our world,” Holcomb said. “This mural will be an enduring reminder of her spirit of forgiveness and love.”

For Abrams and Green, who initiated work on the mural, the 500 Festival Building was a natural choice because of the organization’s close ties with Kor.

In 2017, Kor was named Grand Marshal of the 2017 IPL 500 Festival Parade and served as the Official Pacesetter for the 2019 OneAmerica 500 Festival Mini-Marathon. In the 500 Festival’s 60-year history, Kor is the only person to have served in both of those roles.

Beyond that, at such a central location, they believe it will reach more people downtown.

Overall, the group just hopes she is remembered fondly and is able to spread hope and positivity, while she can no longer do it in person.

“I would like her to be remembered in a positive way,” Kor said. “That she could help some little girl here in downtown Indianapolis overcome adversity, to make that young girl into somebody who has a great future.”

See more photos and video at the original post