Keeping Hanna’s story from being forgotten

When the popular television program “This is Your Life” aired Hanna Kohner’s story in 1953, she became the first Holocaust survivor to share her story on American television. 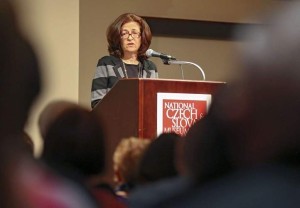 It’s a story her daughter Julie Kohner is working to keep alive today, now that her mother, who died in 1990, is gone. “I have the responsibility of ensuring that Hanna’s story is not forgotten,” she told about 200 people who gathered to hear her speak at the National Czech & Slovak Museum and Library in Cedar Rapids on Thursday.

Her mother, a Jewish woman from Czechoslovakia, survived four concentration camps, including Auschwitz. She and her childhood sweetheart and fiance Walter were separated by the beginning of World War II. He had secured a visa to the United States and promised to send for her. When the Nazis invaded Czechoslovakia, she fled to Amsterdam, where she met and married a German refugee. The couple were eventually caught and arrested by the Gestapo after the Netherlands was invaded, and she never saw her first husband again.

For seven years she lived a nightmare, falling to 73 pounds. When sent to bathe in Auschwitz, she never knew if she was being sent to shower with water or poison gas. She was eventually transferred to Mauthausen, where U.S. soldiers liberated her and other survivors. One of those soldiers wrote a letter to Walter, who started a search across Europe to find her. The reunited couple moved to Los Angeles.

Hanna’s brother also survived Auschwitz — the only other member of their family to survive — but they weren’t reunited until the “This Is Your Life,” episode. Their emotional reunion was broadcast across the country.

“This is how America saw it. This was the first person on television to introduce America to the Holocaust,” Julie Kohner said. “People weren’t talking about the Holocaust in their homes, let alone on television.”

Hanna wrote her story down in “Hanna & Walter: A Love Story,” a book that details what she experienced in the camps. Julie Kohner played a clip from a 1984 book tour interview with her parents. The host asked Hanna how she felt when people expressed doubt the Holocaust existed.

“This is why I had to write my side of the story,” she replied. “If we don’t put it down and tell it to our children, there will be a day where people will doubt whether this really happened.”

That sentiment inspired Kohner to create a non-profit, “Voices of the Generations,” and an affiliated middle and high school curriculum. The curriculum centers on her mother’s book and incorporates the “This is Your Life” episode.

The Thaler Holocaust Memorial Fund was established in 1995 by David and Joan Thaler to provide support for education about the Holocaust to residents and students in Linn County. The Fund will sponsor another speaker, Holocaust survivor Renata Laxova, who will visit Cedar Rapids April 12 to April 14. She will speak at “Lest We Forget,” a Holocaust Remembrance Day memorial service, at 7 p.m. April 12 at Mount Mercy College.

Kohner also met with students at area middle schools Thursday. She said sometimes students ask her why this story is important.

She said she was she simply points to current events.

“We saw what happened in Paris recently. There’s hatred. It’s around,” she said. “Look what’s happening now, even in Ferguson, Missouri.”

She said the children of the survivors have a responsibility to keep the story of what their parents endured alive.

“That generation is dying out very rapidly. There are so few survivors,” she said before the presentation. “It’s up to us to continue on with our parent’s legacy.”

l What: “Nicky’s Family” tells the nearly forgotten story of Nicholas Winton, an Englishman who organized the rescue of 669 Czech and Slovak children just before the outbreak of World War II.

l When: On April 12 at Mount Mercy University, on April 13 at Coe College and Cornell College and on April 14 at Kirkwood Community College.

l Details: For times and places, go to https://holocausteducate.org/