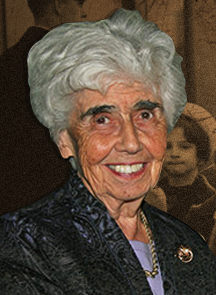 Renata Laxova’s life story began at the center of the twentieth century’s greatest human turmoil. She was born to Jewish parents in the Moravian city of Brno (now part of the Czech Republic) in 1931, less than two years before Hitler became Chancellor of Germany and launched his murderous onslaught across Europe.

The Czech regions bordering Germany were Hitler’s first targets for conquest, beginning with the German-speaking regions of the Sudetenland. Although she was very young, Renata knew that her parents and their friends were fearful of what was to come. In a recent interview with the Wisconsin State Journal, Ms. Laxova (née Polgar) recounted her first inklings of the coming danger as her father (a successful accountant) and her mother hosted a Jewish refuge couple fleeing the Nazi occupation. The Gestapo had murdered their children, but the man and woman somehow escaped to Brno and found shelter with her family.

“I only saw them that one night,” Laxova told the Journal. “They were gone the next morning. But if I saw them now, 75 years later, I would recognize them.”

By the time Renata had reached seven years old, the Nazis had taken control of Brno, and now it was her family that was in danger. After the occupation began, Renata’s mother attended a lecture by an English politician, George Lansbury, who encouraged Czechoslovakian Jews to flee the imminent danger facing them from the Nazis. Renata’s mother wrote to Lansbury, hoping to secure a place for her child on one of the now famous “Kindertransport” trains which took thousands of Jewish children from Nazi-held territory to safety in England and Sweden.

Sir Nicholas Winton, at the time a 29-year-old London stockbroker, was in charge of the Kindertransports in Czechoslovakia. Winton’s agency, which he called the “British Committee for Refugees from Czechoslovakia, Children’s Section,” contacted several nations in search of homes for Jewish children. Only his native England and Sweden opened their doors.

Ms. Laxova told USA Today: “I admire him (Winton) greatly…He not only saved the lives of 669 children, he changed their thinking. He changed the hearts and minds of their descendants. I am very convinced. I believe there is not one of us who doesn’t want to do something good for the community.” Winton was able to procure eight transports to carry those 669 Jewish children to safety in foster homes in England. Eight year-old Renata was fortunate enough to be on the on the last train to arrive safely in England on Aug. 2nd 1939. Her parents promised the heartbroken little girl that they would try to get to England to join her. It was one month before Hitler’s invasion of Poland, and the beginning of World War II.

She spent seven years safely out of reach of the Nazi atrocities with the Daniels family in a suburb of Manchester, England. The Daniels were Quakers, and had seen Renata’s picture in a Quaker publication seeking homes for refugee children. Her parents were not able to escape to England but they did survive. Her mother was the first civilian to be allowed to fly out of Prague to England after the war, where mother and daughter were reunited. They returned to Czechoslovakia in 1946, where she finished school and began her University studies.

She trained in Medicine at Masaryk University in Brno, receiving a PhD in Medical Genetics and graduating from medical school in 1956. She married a veterinarian named Dr. Tibor Lax, and they had two children. Her doctoral thesis was entitled “Genetics of Isoamylases: Study of the New Human Polymorphism.”

Sadly, she and her family were forced to flee from her homeland again in 1968, when the Soviets invaded Czechoslovakia. In the UK, she worked at the Kennedy-Galton Centre for Medical and Community Genetics in London. She was then appointed to the faculty at the University of Wisconsin-Madison in 1975 where she worked at the Waisman Center, a research center for human developmental disabilities. She is the discoverer of the Neu-Laxová syndrome, a rare congenital abnormality involving multiple organs.

When asked about the satisfaction she get’s from talking to younger Americans about her life, she replies:

“I didn’t talk about this at all for many decades, particularly when I was working – in Czechoslovakia, in England or the US, mostly until a few years after I retired. I did not consider it relevant. When interest increased in the subject, I realized that the Holocaust was a significant period in the history of the 20th century, indicative of the presence of evil and cruelty, which a large proportion of the population was able to ignore, forget and exclude from its consciousness.

I can’t say I derive any satisfaction in talking about the Holocaust. I do it because, and when asked to do so. Finally, I emphasize that people of all generations should try to appreciate and become positively aware of that which is good in their lives, even under circumstances in which such issues seem to be lacking.”