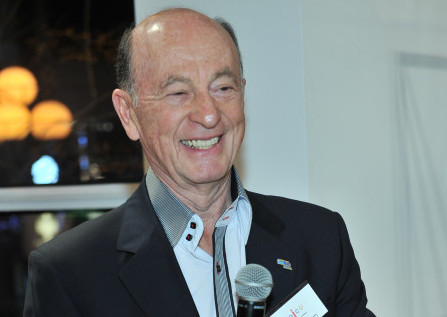 The University of Northern Iowa’s Center for Holocaust and Genocide Education invites you to a webinar with Sol Nayman, Holocaust Survivor and Educator

ON ZOOM
free and open to the public

Sol Nayman was born in Stoczek Wegrówski, Poland, on November 5, 1935. In September 1939, when the Nazis attacked the town, the family fled to the nearby forest. Eventually, they made their way to Bialystok, which by then was under Soviet control. Soon afterward, they were deported to a forced labor camp deep in the Soviet Union. In 1944 they were shipped to a labor camp in Ukraine. When the war ended in 1945, they left the Soviet Union and ended up in a displaced persons camp in Wetzlar, in the American Zone of West Germany. In 1948, Sol and his family were admitted to Canada, docking in Halifax on October 16.

**This program is part of the Out of Darkness: Holocaust Messages for Today project, and is made possible with support from the Norman Cohn Familv Holocaust Remembrance & Education Fund at the University of Northern Iowa.