Magda Brown is no stranger to the concept of persevering.

A survivor of the Holocaust at age 17, a painful journey to Storm Lake to share her story was not about to stop her.

On her way, the 90-year-old fell in Chicago, likely breaking her hip. She refused to be stopped from getting on the plane in Chicago, insisting that she had promised to be in Storm Lake. She made the flight to Sioux City, got in a car with her daughter and despite throwing up from the pain, drove the rest of the way. Only when she arrived at King’s Pointe was help summoned and she was taken to the emergency room. 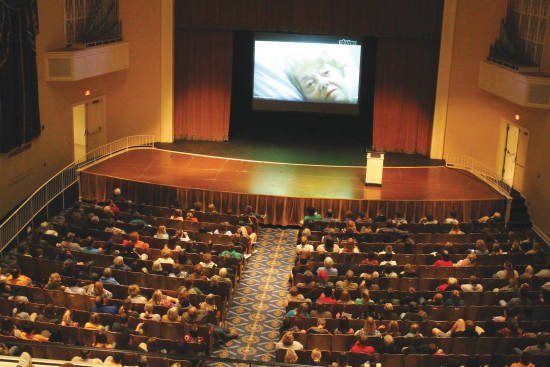 Magda Brown speaks to a large crowd at Schaller Chapel from her bed at the medical center. After suffering an injury, a Skype link was employed so Brown could give her address.

When a large crowd arrived at Schaller Chapel Thursday evening expecting to see her speak, they were greeted instead with a hastily set up screen.

Brown gave her speech from flat on her back in a hospital bed, using Skype to address the audience. She spoke clearly and passionately, and there was no mistaking the message she left the locals with at the end of her story – protect your freedoms at all cost, and make a personal stand against hate.

Delving deep into the past, she recalled hey idyllic youth as a happy-go-lucky teenager in Hungary. Her father had served his country proudly in World War I. But Hungary had severed ties when the United States entered the second world war, and now, discrimination was well under way. Jewish men were not permitted to wear the military uniform or carry a weapon. They were put on work patrol, and treatment grew increasing ruthless. Movies and media painted the Jews asterrible people. Soon, Jewish professors and journalists were being stripped of their jobs, farms and businesses were being taken away from families.

“Thus, the killing machine begins. The Holocaust was a pre-meditated, scientifically-coordinated mass murder,” Brown said. By the war’s end, an estimated 400,000 Hungarian Jews would be killed.

In March of 1944, her live changed forever. Nazi officers under SS leader Adolf Eichmann entered Hungary and ordered that all Jewish people be incarcerated in ghetto areas. They were given one hour to pack one small bag each and line up in the streets to be marched away.

The home Brown grew up in was already within one of the prescribed areas. “Forty exhausted human beings were put into our house to find a little corner to put their tired heads down,” she recalled. Others, “punks” combing the streets, would invade houses in the ghettos and steal anything of value the Jewish people might have left.

“We were told the lie of the 20th century – that families would stay together,” Brown said.

The Jewish Hungarians were taken to a brick factory. Only later would she understand why – train tracks ran there. On her 17th birthday, she and the others were pushed into dark boxcars, 80 or more to a car packed together to the point where they could not move. There were two buckets in the car – one for water and one to serve as a bathroom. In three days on the rails, the water bucket would never be refilled. Eventually the men were taken out – it would be the last time Magda would see her father. Her was later separated from her mother, who would die in a gas chamber.

Magda was taken to Auschwitz-Birkenau, part of a sea of thousands of prisoners. She learned later than 147 trains hauling up to 50 cars full of the Jewish exiles had made the trip from her country over a 51-day period – the crowd gasped at the reality of those numbers.

From the time they arrived, the Nazi guards never spoke to the Jewish people, giving orders with hand signals only. “We were no longer human beings,” she said.

They were forced to disrobe in the courtyard, then their heads and bodies were shaved of all hair. Magda was given only a slip, and sandals held together with a leather strap, to wear. The marks where the leather strap cut into her skin are still there today.

While photos of Holocaust barracks often show bunk beds and other rude furnishings, that wasn’t the case with Brown’s location, the closest area to the death chambers. They were to be killed quickly anyway, so the buildings were bare, 500 people sleeping side by side on the hard floor. They were given little food, one glass of water a day when they were lucky, and forced to stand like soldiers for hours, with machine guns trained on them. Many began to fall ill from the conditions.

Sometimes the prisoners would ask where their fathers were. Guards would only point to the Auschwitz chimneys nearby, where pungent black smoke had been issuing for days.

“We couldn’t believe it. This is a civilized society in the 20th century. People don’t burn people,” Brown said.

Soon, the girls were led back to the courtyard and stripped naked again – for their captors to judge their strength to labor. Magda was one of 1,000 Hungarian women and girls sent to a munitions factory running 24 hours a day to fuel the Nazi war effort. They labored 12 hour day and night shifts, pouring toxic liquid into the head of bombs being assembled, then carrying the heavy munitions to be stored for shipping. The poison seeped into the girls’ skin, turning their faces yellow and their lips purple. American reconnaissance plans flew over the scene, but the factory was built low with foliage growing on the roof, so it looked like an ordinary meadow from the air.

Finally, with the German war effort failing, the girls were ordered into a death march. They slept on the wet ground and trudged through cold, rain and wind to meet their fate – the coldest March Brown believes she has ever seen.

“We lived in faith, fantasy and determination to stay alive. You have no idea, under the worst of conditions, how badly you can want to live,” she said.

One day, the girls saw a barn in the distance as they neared a stopping point in the march for a night. They decided to make a break for it. “If they find us they will kill us, but at least it will be over,” she remembers thinking.

The next morning, they took turns looking through a peephole in the barnwood, awaiting capture. Instead, she said, they saw two “beautiful” men in unfamiliar uniforms. “I will be forever grateful they risked their life to save ours,” Brown says. She was liberated by the U.S. Army 6th Armored Division. Now an orphan, with nothing, she was allowed to come to America in 1946, and went on to have a family and a long career in a medical office. Living near Chicago, she now travels tirelessly to share her story first-hand, in hopes that the next generation will never allow another Holocaust to happen.

She left the crowd with three suggestions:

“The most important commodity you can have is your freedom. Work at it,” she said.

Two, “Why do we hate people? Think about it.”

And, “Stand up to the deniers.”

Police and other supporters at Magda Brown’s bedside after her speech.

Brown remained in the hospital Friday, as attempts were made to find a way to get her home. In the morning, she once again refused pain medication so she could speak to middle schoolers, again using Skype.

Magda also made admirers among the Storm Lake Police Department. After officers were summoned to King’s Pointe to help the Holocaust survivor upon her arrival, several made a point of attending her message at BVU. Afterward, SLPD night shift members went to her hospital room with flowers to thank her for her courage and example. “Her message to eliminate hate rang strong Thursday night. What an incredible woman,” the department posted online.

• Next in a series of Holocaust-related events: On Nov.6, BVU presents Judy Winnick, portraying Miep Gies, who helped hide Anne Frank’s family in the Netherlands during World War II. That presentation is scheduled for 7 p.m. in Anderson Auditorium. The public is welcome, free of charge.