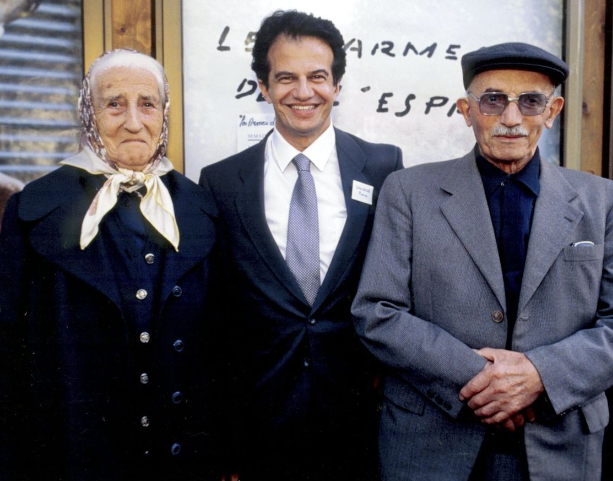 Holocaust survivor was 18 before he knew he was Jewish. 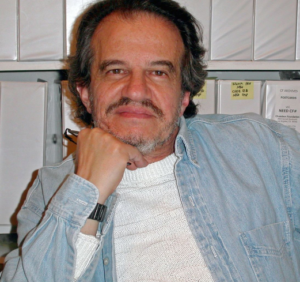 Documentary filmmaker Pierre Sauvage, born to Jewish parents in a French village that harbored thousands of Jews during the Holocaust, did not find out he was Jewish until he was 18 years old.

Sauvage will speak in Tulsa next weekend at an event commemorating the 79th anniversary of Kristallnacht — Night of Broken Glass — the attack on thousands of Jewish businesses and synagogues in Germany that is considered the beginning of the Holocaust.

He was born in Nazi-occupied France, in Le Chambon-sur-Lignon, a small farming community 30 miles south of Lyon.

His father, a journalist, and his mother had sought refuge there from the Nazis. The village was an enclave of Huguenots, French Protestants in the heavily Catholic nation.

The 5,000 people of Le Chambon sheltered some 5,000 Jewish people during a four-year period of the war.

After the war, the family moved to Paris and, when he was 4, to New York City, where Sauvage was raised.

But his parents, whom he described as vehemently anti-religious and entirely secular, hid from him that history and his Jewish identity, he said in a phone interview this week.

Flimmaker Pierre Sauvage (center) in 1980 in Le Chambon, France. flanked by rescuers Marie Brottes (left) and Henri Heritier, a beekeeper who played a role in his early life.

Only when he was about to continue his education in France, and to stay with a cousin who was a survivor of Auschwitz concentration camp, did his parents tell him he was Jewish.

Sauvage lived for eight years in Paris, became a filmmaker and then moved to southern California, where he now lives.

In the course of his career, he returned to the village of his birth to make a documentary film titled “Weapons of the Spirit” about the village’s role in protecting Jews from the Nazis.

There he met some of the people who had cared for him as a baby.

“But I realized that these people I was meeting in Le Chambon were among the sharpest people I had ever met. These were people who had a clear sense of their own identity. They were so rooted, and I was the opposite. …

“I came to realize that having a clear sense of identity is one of the stepping stones to good conduct.”

Protecting the Jews from the Nazis was something they did naturally, out of a sense of who they were, he said.

“They simply couldn’t imagine themselves not responding in a way that seemed right. … They viewed their self-interest as remaining people who could look at themselves in the mirror without cringing.”

Sauvage said it made him realize the “clear sense” good people have of their own self-interest, mental health and balance.

“Good people are happier,” he said. 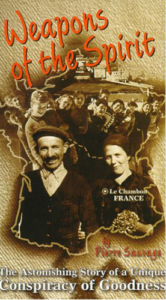 Much of his film showed close-ups of the faces of the people of Le Chambon.

“A lot comes out of seeing their expressions, seeing their faces,” he said. “Realizing that a woman’s shrug dismissing the significance of what she did is more eloquent than a thousand speeches.

“They’re not being falsely modest. They genuinely do not think what they did was a big deal because it came so naturally to them.”

After his experience with the religious people of Le Chambon, he said his mindset changed.

“I’m no longer anti-religious,” he said. “I’m not a believer, but I believe that religion raises significant questions that we should all attempt to deal with honestly and intelligently.”

As a documentary filmmaker, Sauvage said he has explored not only the minority of people who risked their lives to save Jews during the Holocaust, but also the vast majority of people, both in Europe and America, who turned a blind eye, or remained silent.

He has been struck in recent days by the parallels he sees in the mounting reports of widespread sexual harassment by people in high places.

“None of this could have happened if there weren’t, on the one hand, enablers, and silence,” he said, what some have called “a conspiracy of silence.”

“Because I was raised with taboos, secrets, about my own history, I have a real aversion to taboos,” he said.

The commemoration is free and suitable for adults and youths in sixth grade and above. For details, call the Jewish Federation at 918-495-1100.

The event is sponsored by the Jewish Federation’s Council for Holocaust Education, Tulsa City-County Library, Circle Cinema, Northeastern State University and NEA Big Read, a program of the National Endowment for the Arts in partnership with Arts Midwest.

Sauvage’s 1987 film about Le Chambon will be shown 7 p.m. Nov. 11 at Circle Cinema, 10 S. Lewis Ave. He will attend the showing and answer questions. Tickets are $9.50 and $7.50 for military, students and teachers, available at www.circlecinema.com or at the theater box office.

Reposted from the Tulsa World