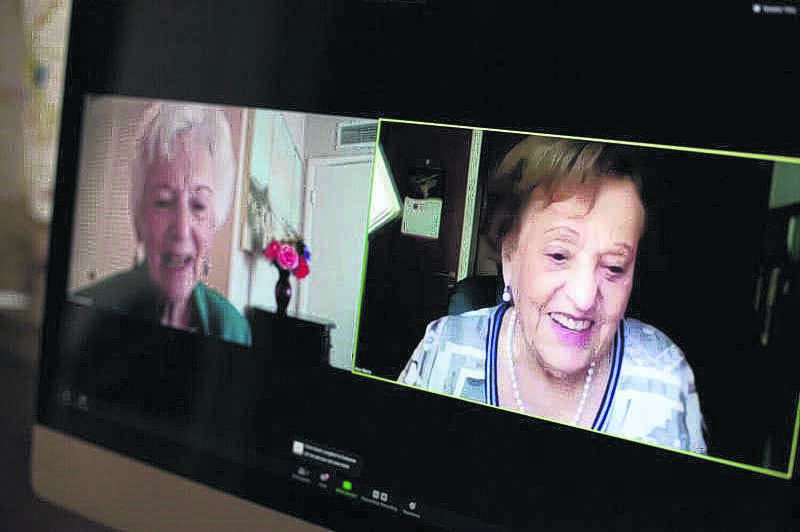 Every Sunday, Betty Grebenschikoff and Ana María Wahrenberg have a scheduled phone call. They often lose track of time talking, as best friends tend to do.

The weekly calls are only a recent ritual. In fact, just four months ago, both women believed the other had died in the Holocaust.

“For 82 years, I thought my best friend from Germany was dead,” Grebenschikoff said. “I’d been looking for her for all those years, and I never found her.”

Everything changed when a string of fated flukes brought the childhood friends and Holocaust survivors — both now 91 — together again.

The last time the two women saw each other was in the spring of 1939, when they were 9.

Back then, Grebenschikoff went by the name Ilse, while Wahrenberg was known as Anne Marie. Both women changed their names later in life.

They vividly recall standing across from one another in a Berlin schoolyard, and through tears, sharing one final hug before they each had to flee the country and the Nazis. The weight of that moment has stayed with them all their lives.AD

“We did not want to separate. We loved each other very much,” Wahrenberg said.

“We promised we would keep in touch and meet again,” echoed Grebenschikoff.

They knew then that their promise might be impossible to keep, as the war was imminent. But the alternative, they said, was unthinkable.

The women first met when they were 6. They attended school and synagogue together, took ballet lessons and played dress-up. More or less, their friendship was like any other wholesome bond between young kids.

But, because they were Jewish, certain activities were placed off limits to them by the German government, “We couldn’t play in the park and ride bicycles,” Wahrenberg said.

“We weren’t allowed to go to the playgrounds and swimming pools and theaters,” Grebenschikoff added. “We didn’t quite understand why.”AD

So, they spent all their spare time holed up in each other’s homes, telling stories and playing games. In hindsight, the countless hours together, secluded from the outside world, is what strengthened their bond, they said.

Both girls were in Berlin during the November Pogrom of 1938 — also called Kristallnacht, or the Night of Broken Glass — a terrifying event they remember with unsettling clarity. Thousands of Jewish-owned stores and synagogues across the country were demolished by the Nazis, and 30,000 men were arrested just for being Jewish, including Wahrenberg’s father. He spent a month in Germany’s Sachsenhausen concentration camp before he managed to escape.

“Kristallnacht was the warning bell that told Jews this was very serious, and we had to get out,” Grebenschikoff said.

The two separate families ultimately fled — Grebenschikoff settled in China, while Wahrenberg ended up in Chile. In a rare outcome, they all survived.

Grebenschikoff, alongside her sister and parents, boarded a ship to Shanghai, one of the few places that took in Jews without visas, in the spring of 1939. About 20,000 European Jews settled there.

Although the family was able to escape Europe in the nick of time, “life was very hard in Shanghai,” Grebenschikoff said.AD

“There was not enough food, not enough shelter, no medication and so on. But had we stayed in Germany, I wouldn’t be alive,” she continued, adding that most of her extended family was killed by the Nazis in the Holocaust.

As time passed, Shanghai started to feel like home. Grebenschikoff settled into life there and got married in 1948. But not long after, in the wake of the Chinese Communist Revolution, she and her husband were forced to flee.

“They wanted all the foreigners out, so we had to run away again,” Grebenschikoff said. She was eight months pregnant with her first child when she and her husband traveled to Australia in 1950, where they lived for three years before settling in Atlantic City, N.J.

Grebenschikoff went on to have five children, seven grandchildren and six great-grandchildren.AD

As she moved through life, Wahrenberg was always on her mind, she said. She searched tirelessly for her long-lost friend, scouring databases and asking anyone and everyone for information on what might have happened to her. She eventually assumed the worst.

As an adult, she began giving speeches about her experience in Nazi Germany and fleeing for her life to Shanghai.

In her memoir, which was published in 1993, there is an entire chapter dedicated to Wahrenberg.

When she wrote the book, Grebenschikoff had no idea her childhood best friend had settled in Santiago in November 1939 or that she had changed her name from Anne Marie to Ana María.AD

Wahrenberg is an only child, and though her and her parents’ lives were spared, her entire extended family was murdered by the Nazis.

She got married and eventually had two children, six grandchildren and 10 great-grandchildren. She, too, searched for Grebenschikoff over the years, but given that Grebenschikoff had changed her first name from Ilse to Betty, her friend was nowhere to be found.

“It was impossible for me to find her,” said Wahrenberg, who also wrote a memoir and speaks regularly at events about the Holocaust.

But their lifelong search for one another suddenly culminated in November, when an indexer from the USC Shoah Foundation — a nonprofit organization founded by Steven Spielberg, which produces and preserves audiovisual testimony of Holocaust survivors — drew parallels between their testimonies.

These women were close friends. Then they found out they’re actually sisters.

It started when Ita Gordon, an indexer for more than 20 years, attended a webinar hosted by the Latin American Network for the Teaching of the Shoah in early November.AD

The event, which marked the anniversary of Kristallnacht, featured a guest speaker who shared a detailed testimony about her experience. It was Wahrenberg.

Gordon, who is fluent in Spanish, was immediately intrigued by her story.

Promptly after the event, she delved into the Shoah Foundation’s archives, which contain 55,000 Holocaust testimonies, including Grebenschikoff’s. She was hoping to uncover more information about Wahrenberg’s life.

Although Gordon did not find Wahrenberg’s testimony in the archives, she did unearth something unexpected. Upon typing in Wahrenberg’s name along with several key words — including the name of the Jewish day school both girls attended in Berlin — Gordon was led to Grebenschikoff’s testimony, which she gave in 1997.

“I never knew what happened to her. I’m always wondering if maybe she’s somewhere and can hear this,” Grebenschikoff said during the interview.

“It all started to make sense to me,” Gordon said. “There was a voice inside me that told me to pursue this story. For their sake, I wouldn’t let go.”

She probed deeper and cross-referenced additional details to confirm her suspicion that these two women grew up together in Berlin. Although both Grebenschikoff and Wahrenberg had changed their names, the neighborhood they grew up in, the school and synagogue they attended, as well as other small factors, all lined up.

In a matter of hours, Gordon had found the “Anne Marie” that Grebenschikoff had fondly described in her testimony — the long-lost best friend she had sought for so many decades.

Gordon immediately consulted with her colleagues, who joined forces with the Florida Holocaust Museum and the Interactive Jewish Museum of Chile to facilitate a virtual reunion between the two Holocaust survivors.AD

When the women heard the other was still alive, they were shocked and delighted in equal measure.

“It was such a miracle,” said Grebenschikoff, who called the unlikely reunion “bashert,” Yiddish for “destiny.”

Grebenschikoff joined the Zoom call on Nov. 19 from her home in St. Petersburg, Fla., while Wahrenberg signed on from Santiago. Right away, they started chatting in German, their shared language.

“It was like no time had passed,” Grebenschikoff said. “Of course, 82 years makes a difference, but more or less, we just picked up where we left off.”

Their families joined the call, too, as well as Gordon and other Shoah Foundation staff. They drank champagne and toasted the newfound friendship.

“This is a total gift in her life,” said Jennifer Grebenschikoff, 70, Grebenschikoff’s eldest daughter. “All of us were just stunned to watch the two women connect so quickly and start laughing like they were still 9 years old.”

After 82 years, Grebenschikoff and Wahrenberg both said they felt deep friendship and love, as if they had never parted.

They scheduled a standing phone date every Sunday, and they also email and call throughout the week to check in with one another.

Plus, Wahrenberg added, “I have big plans to travel to Miami and be together for Rosh Hashanah.”

While they agreed that their friendship should never have been halted in the first place, “once in a blue moon, there is a silver lining,” Grebenschikoff said. “It’s so rare to find that in Holocaust literature.”

The women have vowed to remain healthy so they can meet in person come September. Their plans for the reunion include going for walks, meeting each other’s families and sharing several meals together.

Mostly, though, “I just want to hug her again,” Grebenschikoff said. “It would be a culmination of a lifelong journey.”