Not every historian gets portrayed by Rachel Weisz. Lipstadt hopes film, opening Thursday, clarifies for new generation that ‘Holocaust denial is not an opinion’

LONDON — “Oh, I’m having a good time!” laughs historian and professor Deborah Lipstadt when asked how she is. “Nothing I did prepared me for the trial and nothing I imagined — even in my wildest dreams — prepared me for this ride. It’s amazing!”

Lipstadt is referring to the film “Denial,” which recounts the true story of her historic, high-profile, legal battle against Holocaust denier David Irving. Directed by Mick Jackson (“The Bodyguard”) and adapted by British playwright David Hare, the film is based on her book, “History on Trial: My Day in Court with David Irving.” Academy Award winner Rachel Weisz plays Lipstadt.

In 1996, Lipstadt and her publisher Penguin Books were sued for libel in England by Irving, whom she had called a Holocaust denier in her book “Denying the Holocaust.”

In such cases, under English law, the burden of proof rests on the defendant, so Lipstadt and her lawyers had to prove that what she had written about him was true. They had to show that Irving had ignored evidence of the Holocaust — rather than proving that the Holocaust had happened — by using expert witnesses and working through Irving’s historical works to demonstrate where he had lied about it.

At the end of the 10-week trial, High Court Judge Charles Gray found for Lipstadt. In his judgment, he held that Irving had, “for his own ideological reasons persistently and deliberately misrepresented and manipulated historical evidence” to portray Hitler “in an unwarrantedly favorable light,” particularly in his treatment of the Jews. He also found Irving to be an “active Holocaust denier; that he is anti-Semitic and racist, and that he associates with right-wing extremists who promote neo-Nazism.” 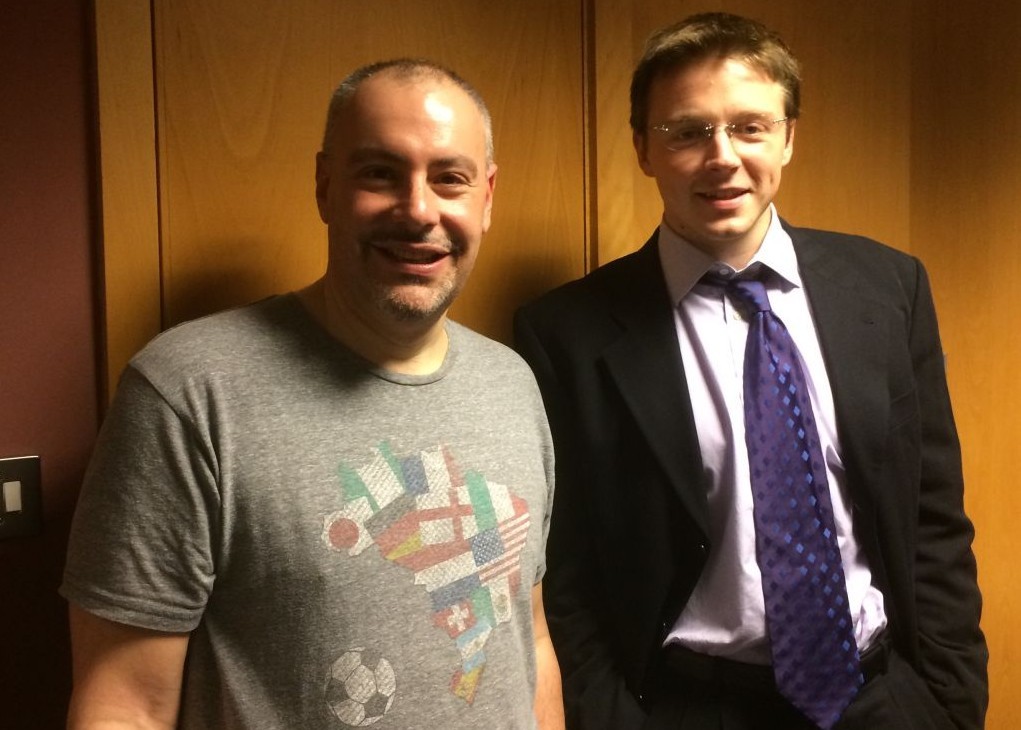 The last time I spoke to Lipstadt was on the film set, outside London’s High Court. The scene being filmed was the judgment day. This main central London thoroughfare was intermittently closed for the shoot, but when the cameras rolled, buses drove past, pasted with authentic adverts from the year 2000. Crowds of extras, representing police and security, as well as supporters of both “Lipstadt” and “Irving,” were outside.

Apart from the buses, the scene could have easily passed as the present day. I stood with Deborah, along with other members of the production team, and watched numerous takes of Timothy Spall (Irving) stepping out of his taxi — the moment when the back of his jacket was hit by an egg, thrown by a heckler. 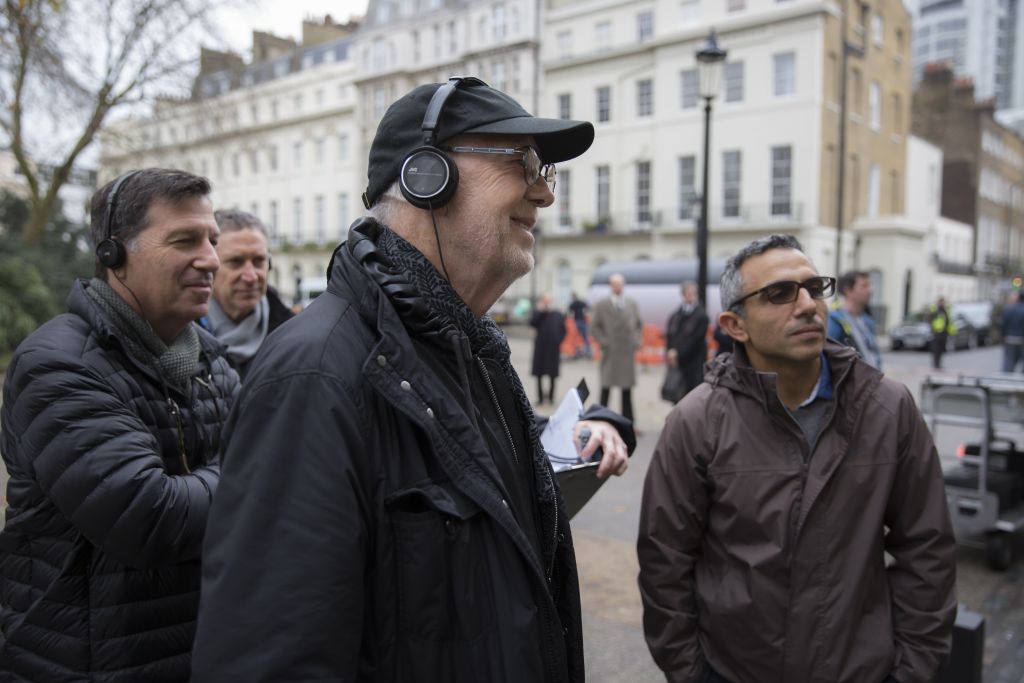 On the film set of ‘Denial,’ outside London’s High Court. (Laurie Sparham/Bleecker Street)

“Denial” premiered at the Toronto Film Festival earlier this month. Since then, Lipstadt has been engulfed in a publicity whirl of interviews, parties and events. Ahead of the movie’s US release on September 30, The Times of Israel spoke with Lipstadt on the phone from New York from her publicist’s office.

‘The whole thing has actually been kind of emotional’

Lipstadt says the experience has been overwhelming. However, amid all the razzmatazz, there have been many affecting moments, which at times have caught her unawares. One occurred even in a joint press interview with Rachel Weisz, when she was describing how, during the trial, survivors would reach out to touch her.

“It’s actually been… the whole thing has actually been kind of emotional,” she says, her voice cracking. “When I was leaving for the premiere in this beautiful Cadillac, I thought, ‘Think about where you’re going, it’s amazing.’ But then I thought about all the people who were involved in this victory, in the making of the film, in telling the story, [as well as] all the people who supported me. This is about real people whose pain and suffering has been denigrated and denied. So what should have been a moment of pure joy and anticipation, became much more pregnant with meaning.” 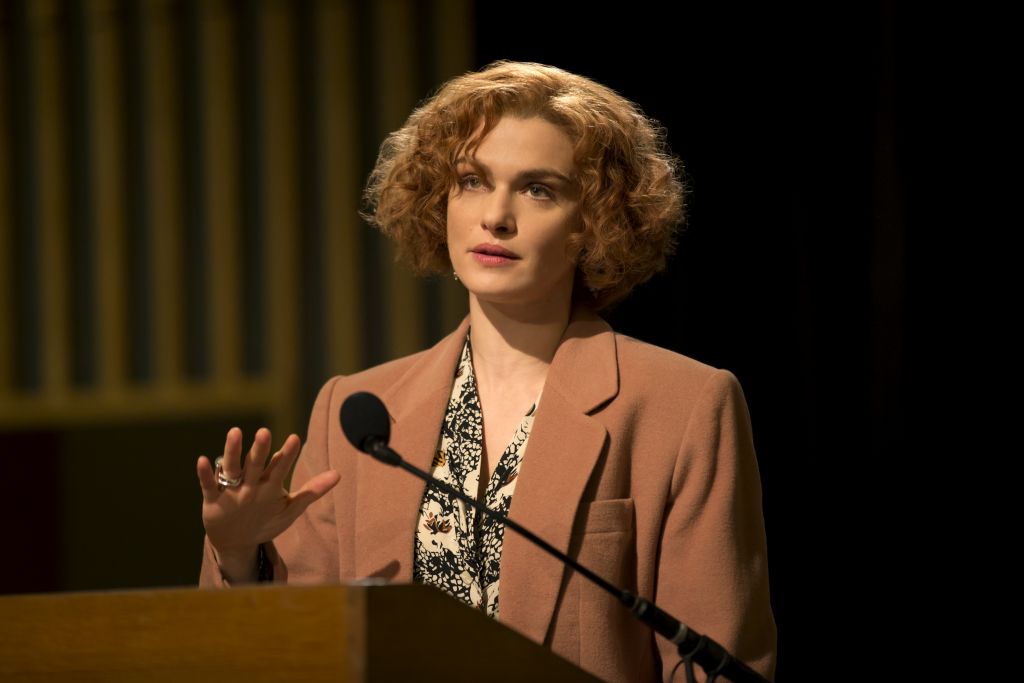 “Even though this is a star laden Hollywood, London production,” she continues, her tone still somber, “there’s a solemnity, an element of reality to the story.” Her hope is that, ultimately, “the film does some good.”

“This is not ‘just’ a Holocaust film,” she says. “That would have been big enough. But it has — and none of us expected it would — a much bigger message in that this is about truth and lies. Not truth and opinion. Holocaust denial is not an opinion. If you have an opinion that’s rooted in a lie, that’s a falsehood, an untruth. I think that this film really zeros in on that.”

There exists, she says, “This denial of facts. Whether you’re talking about the American presidential election or Brexit or the Sandy Hook massacre, for example — some people, just today, are denying that [Sandy Hook] really happened, that it was set up by the Obama administration to get gun control through. Or 9/11. That it was the CIA… or Israel… [These claims are] completely false, unproven, no evidence but they get traction. What we have today is lies parading as opinions.”

For Lipstadt, the film reiterates the importance of defending truth and challenging lies. “You can’t fight every battle, but there are certain battles you can’t turn away from.”

In the 16 years since the trial, Holocaust denial has shifted in its presentation.

This form is characterized by a distortion of facts and differs from what Lipstadt refers to as “softcore Holocaust denial,” defined by the use of false comparisons.

“What we have now is where you talk about the idea, the Nazi-like tactics of the idea. For example, you can disagree with Israel’s policies on a gazillion things, but they are not behaving like the Nazis. Or you can say that the Palestinians are being mistreated, that what is happening to them is totally wrong, but there’s no genocide. But you get those terms — holocaust, genocide — used by people who want to either demean the Holocaust, demean the Jewish people or the Jewish state,” Lipstadt says.

To date, she says, there has only been one response from David Irving regarding the film but she does not expand other than, “I don’t pay attention to that.” 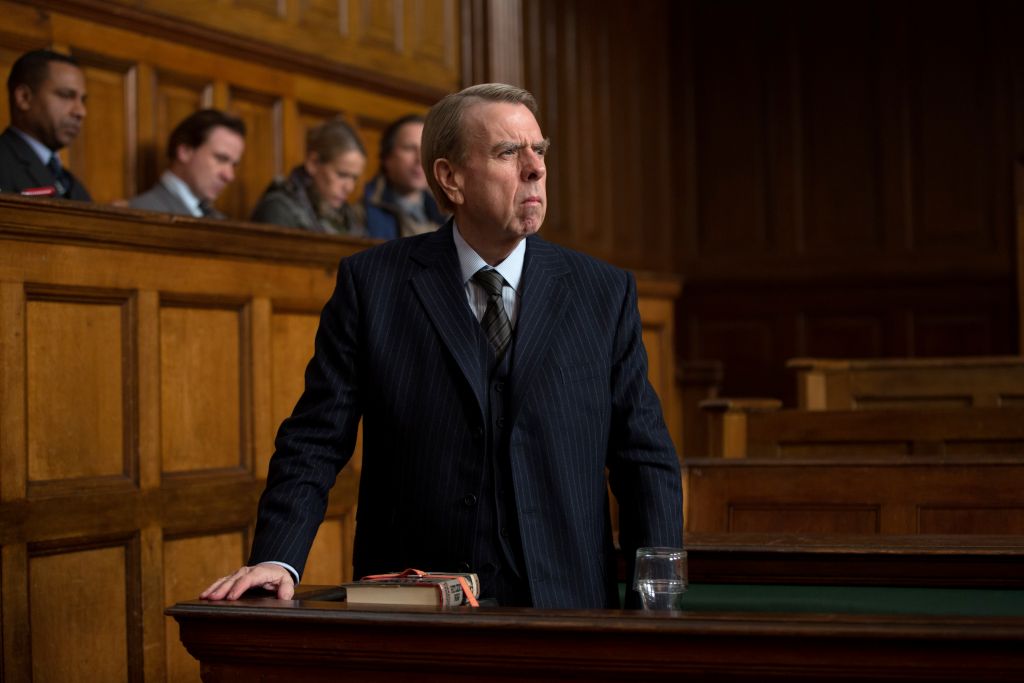 Instead, she is keen to highlight the attention to detail that both the filmmakers — and Rachel Weisz — took in making “Denial.” She stresses that everything that takes place in the courtroom has come directly from the actual trial testimony, including the words of expert witnesses and the line of questioning taken by both Irving and Rampton. Director, Mick Jackson, she says, “wanted to get it exactly right,” even getting a copy made of the ring that Lipstadt wears.

Lipstadt credits Weisz for her research before shooting the movie but also during filming, where she would often check things out with Lipstadt, querying her response to something or confirming how she spoke.

“She was so careful about that. I have such respect for Rachel. She’s a terrific person, a professional’s professional,” Lipstadt says. 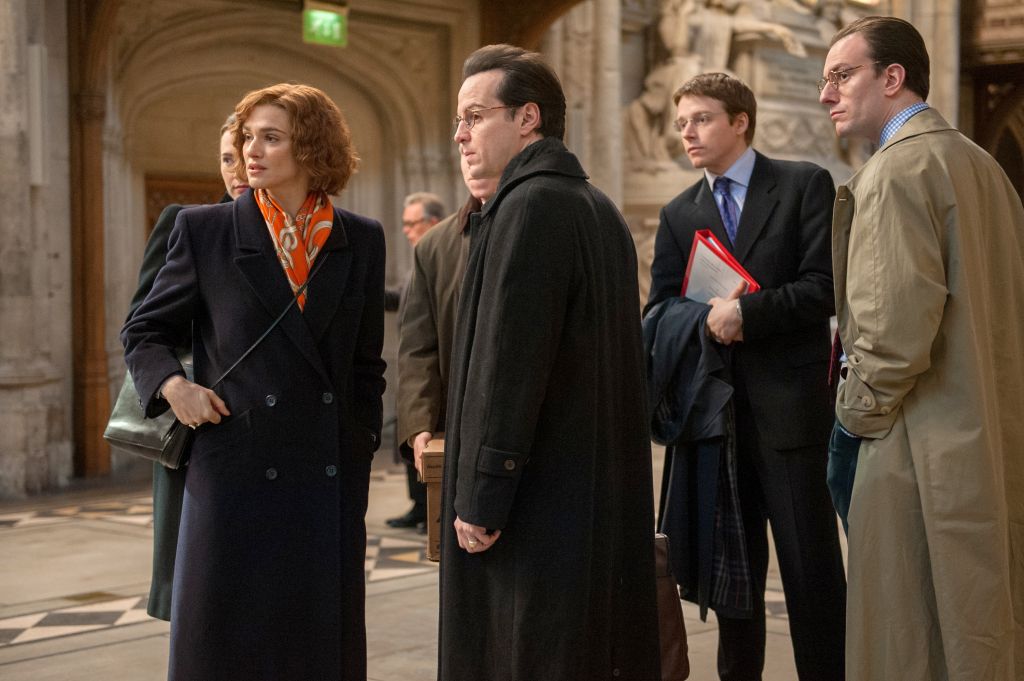 While Weisz seems to have perfected Lipstadt’s distinctive, broad Queen’s accent, Lipstadt admits that she can’t hear how much she sounds like her — although, “Everybody says it, including my family. It’s weird, what can I say?” she laughs.

I tell her that James compares seeing someone play him onscreen to an out of body experience. She agrees.

‘To hear the words you said, coming out of someone else’s mouth… it’s bizarre’

“To hear the words you said, coming out of someone else’s mouth… it’s bizarre,” she says.

The production was made with the full cooperation of the Auschwitz Museum, who worked very closely with them. Filming is not permitted inside the grounds of the camp other than for documentary film purposes, she explains, so actors are shown just outside it, with shots of the camp in the background.

Any scenes depicting an actor on the property of Auschwitz, such as the gas chamber remains, were recreated in the UK. 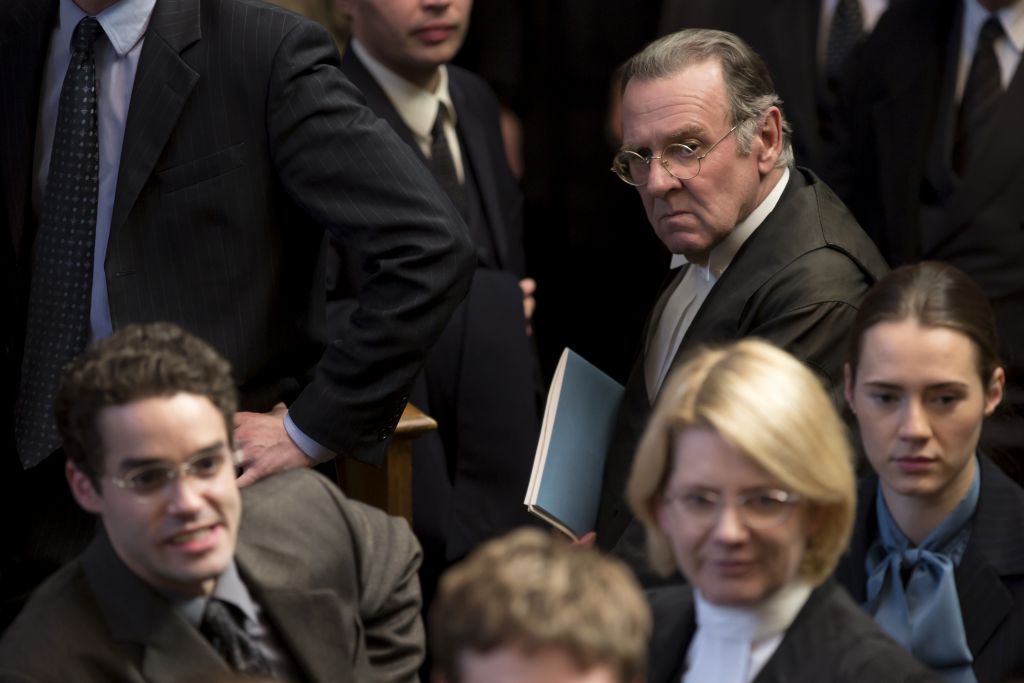 Although the film does reference the financial support that Lipstadt received in fighting the case she admits that she wishes it “had been played up more. Certainly that the money raised was very important because Mishcon de Reya [her UK law firm] devoted themselves full-time on this.”

In a perfect world, there is one other thing Lipstadt might have seen more of in the movie.

“I think the support I received from people… [including] from Emory [where Lipstadt is the Dorot Professor of Modern Jewish History and Holocaust Studies], which I talked about a lot in the book,” she says.

“Emory is not a Jewish university. It supported me so strongly and did so, not only when this was a big case but at the every outset because they felt it was the right thing. The film I would have made would have been three and half hours long!” she says laughing, again.

In many ways the trial and its aftermath have redefined her — she became a public persona, whose passionate and engaging teaching and speaking are constantly in demand, worldwide. But the experience has not changed her.

“I’m the same person that I was before [the trial] and I don’t say that in a self-effacing manner. And what I have to say is the same. What I’m hoping is that more people will hear it. If this story, this film — and it already has — gives me an even broader audience to give the message about fighting denial, fighting prejudice and fighting evil, then as we might say at Pesach, ‘dayenu.’”

Posted from the The Times of Israel