Amid a pandemic, the resilience of Holocaust survivor Max Glauben offers a beacon of hope 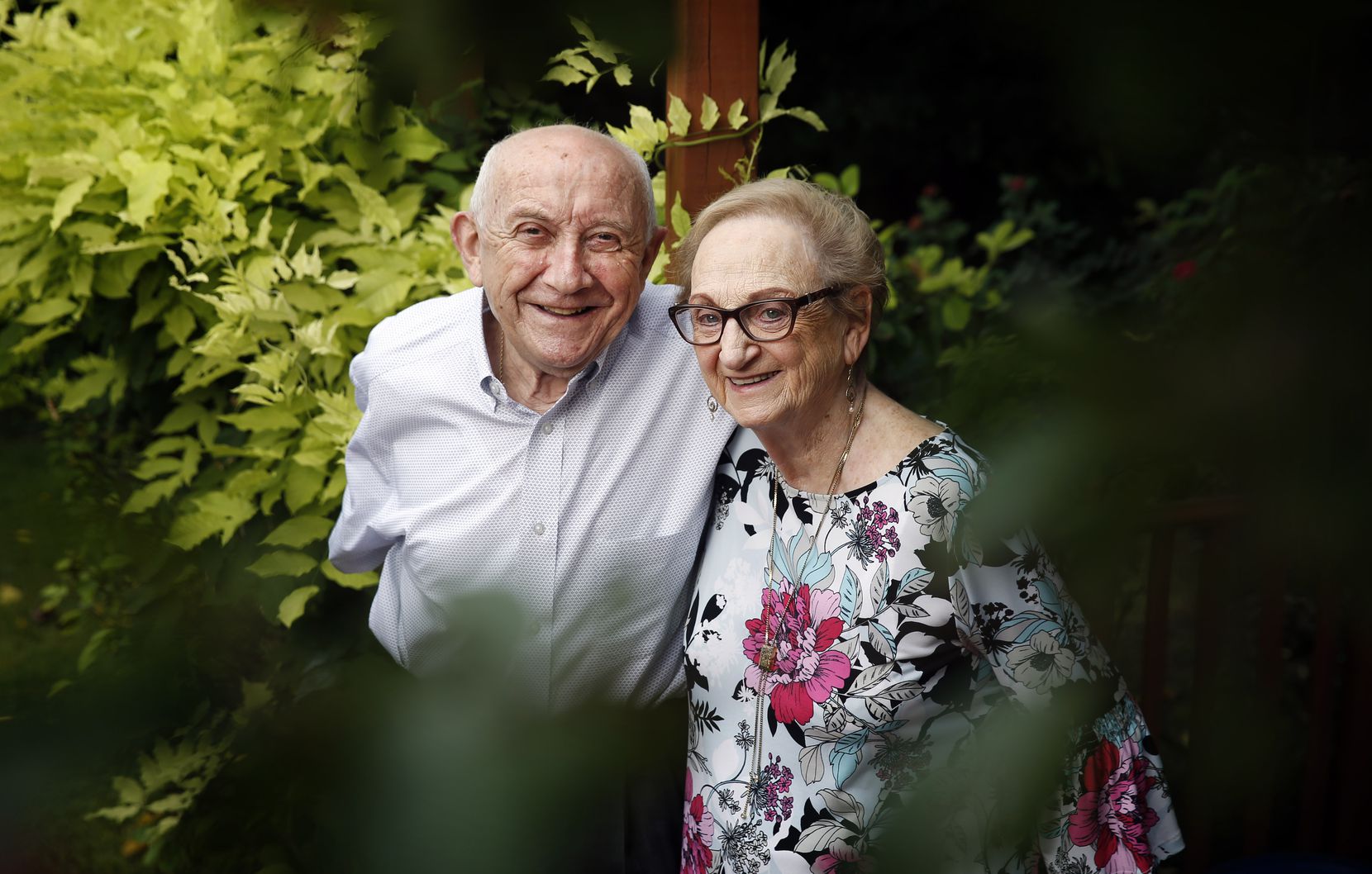 There is no disgrace in being “a hoping machine,” because, Glauben says, he has been one his entire life.

Max Glauben has seen the worst of humanity. He survived the Holocaust, which claimed the lives of every other member of his family. Like most of us these days, he’s at home, protecting himself. But he is also deeply in touch with his memories, and in that way, he can help us.

At 92, the Dallas resident finds himself dwelling on the R word — resilience — saying that so many times during World War II, it saved him. Resilience, he says, is why he’s able to sit safely at home, with so much to share amid the crush of a global pandemic.

“What resilience really is, in my mind,” he says, “is converting a negative into a positive.” Glauben’s life is a testimony of turning despair into hope.

He lived through one of the darkest moments in recorded history, and yet, he is stunned by the numbers from 2020: Almost 5 million cases of COVID-19 have plagued the United States, where more than 158,000 Americans have died from the illness. That’s 100,000 more than the number of Americans killed in the Vietnam War.

When it comes to seeking advice on how to stay hopeful or resilient, there may be no one better than the man who at 13 survived the horrors of a Nazi invasion to live another day. And many more after that.

“I would advise them, number one,” says Glauben, “don’t think about the past. Don’t think about the future. Think about right now. If something happens to you, and God gives you the power to overcome it, then it becomes the greatest gift you ever got. God forbid you catch the virus, but then, if you recover, it becomes a blessing, one you can and should share with the world.”

His fortitude has not gone unnoticed. In recognition of his life, he will receive an honorary doctorate from Southern Methodist University in an outdoor ceremony at Gerald J. Ford Stadium on Saturday, Aug. 15.

At the Dallas Holocaust and Human Rights Museum, which has been closed since March, a holographic image of Glauben details the horrors of the Holocaust. The holographic project is a partnership between the museum and the USC Shoah Foundation, founded by three-time Oscar winner Steven Spielberg.

You can ask Glauben questions about how to cope with fear and loss and even terror, and thanks to the technology, his answers will linger long after he’s gone.

“Around the world, people are suffering,” says Mary Pat Higgins, president and CEO of the museum, “and many are mourning the loss of loved ones due to the pandemic. Our world has changed, and we are faced with tremendous uncertainty, but most of us are not facing the kind of choices Max and our other local survivors were forced to make.

“Our survivors teach us that life must and can go on. We can endure pain, sorrow and even tremendous loss, and still go on to live happy, productive lives. And that pain can be a deep source of compassion and empathy for others. What better role models are there for us today?”

As Higgins says, “Anyone who has met Max in person knows that he exudes optimism and love, even though he endured unimaginable suffering and loss. It is almost impossible to imagine having the strength to go forward, to build a new life, after the horrors of the Holocaust, and yet, here Max is as a beacon of hope.”

When it comes to sharing his own story of resilience, Glauben has earned a rare credibility. Glauben in German means believe. His is a truly historic example of someone who never stopped believing. Those who know him marvel at the fact that he’s able to share his story without a trace of rancor.

As he is fond of saying, “Hate grows in the hater like yeast in a dough.” Hate, he says, “destroys the container that it is in.”

Frieda Glauben, 87, has seen that philosophy manifested in her husband, with whom she shares three children, seven grandchildren and three great-grandchildren. She remembers a speaking event at which her husband sought to console a young German who appeared to be feeling deep remorse about the Holocaust.

“Max was able to console this young man where he walked away with a smile on his face,” Mrs. Glauben says. “That’s just the kind of person Max is.”

His own family helps ensure his resilience. “I think he’s probably more grateful for his family than most people are,” his wife says. “He went from having nobody, literally, to having almost 20 in our family. He loves each and every one of them, and he does not take them for granted.”

Like his wife, Glauben says he spends much of his time “watching the news.” But he is also doing frequent Zoom presentations. One involved going to the Holocaust museum, where he “spoke to an empty” theater but to about 175 people virtually. So, in that way, his memories are never far away.

Glauben’s family, his father, Isaak, mother Faiga and little brother Heniek, were not spared by the Holocaust, as he was. He lost them all, his mother and brother to the gas chambers at the Majdanek concentration camp, where an estimated 78,000 were murdered by the end of World War II.

To this day, Glauben says his hardest moment by far — the one that most tested his resilience — was when his father was killed. Only his shoes were left in the Budzyn concentration camp, on the square where they were laid the night before, as a cruel reminder of the good man who had loved and protected his son for as long as he could.

What his father’s shoes were telling him, he says, was to follow his destiny: Become the last surviving member of the Glauben family, a path of resilience that came with its own reward just recently, when Glauben held in his arms his newest great-grandchild, which helped him realize that his own remarkable resilience had allowed the Glauben bloodline to proceed to the next generation. And the one after that.

Today, he is especially saddened by stories about children dying from the coronavirus. He feels compassion too for those who fear the virus, but says fear, in its own strange way, can be a tool of resilience, an inroad to survival. You wear a mask to protect yourself or those around you, he says, because you fear what might happen if you don’t.

Despite what he’s lived through, Glauben revels in the wisdom of songwriter Woody Guthrie, who died from Huntington’s disease. Until the end, Guthrie clung to hope in the midst of fear, and that, Glauben says, is something everyone must remember, that hope is the pathway to resilience, no matter how suffocating the fear.

“No matter how bad the wicked world has hurt you, in the long run, there is something gained, and it is all for the best,” Guthrie said. “The note of hope is the only note that can help us or save us from falling to the bottom of the heap of evolution, because, largely, about all a human being is, anyway, is just a hoping machine.”

There is no disgrace in being a hoping machine, because, Glauben says, he has been one his entire life.

He also believes in the power of silver linings.

“Horrible things,” he says, “can bring human beings together.”

Since the national emergency in response to the coronavirus took effect on March 13, Glauben says, he has felt “so grateful” for neighbors, who say, “Max, if you need anything, let us know. If you need us to pick you up something at the grocery store, please, tell us. We will be happy to do it.”

Considering where he came from, Glauben says, this warms his heart as much as anything. And yet, one of the ways he remains resilient is to follow his belief that “there is more pleasure in giving than receiving.”

Considering where he came from, Glauben says, this warms his heart as much as anything. And yet, one of the ways he remains resilient is to follow his belief that “there is more pleasure in giving than receiving.”

Because of his past, he admits to feeling waves of emotion these days, when so many others are suffering.

He found himself watching the recent funeral of congressman and civil rights activist John Lewis, and by the end of it, he says, he was weeping. In his words, “Talk about resilience! That man had it!”

“How could he have done that without resilience? And we as a world are so much better for his resilience. How wonderful it would be if we could all be like him.”