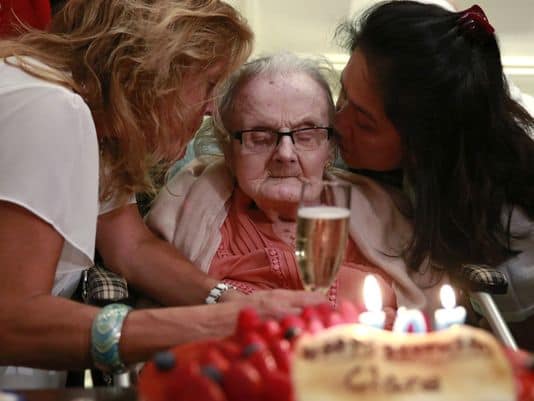 British reporter Clare Hollingworth has a good claim on the title of scoop of the century. For the 20th century, that is. Because it was Hollingworth who broke the story of World War II.

Hollingworth died Tuesday in Hong Kong, where she had lived for the last four decades of her life. She was 105.

In August 1939, Hollingworth was in Poland as an aid worker, but then switched careers and turned to journalism. She landed a job with Britain’s Daily Telegraph newspaper.

Tensions were mounting with Germany, which had just closed border areas to nonresidents. The only exception was for diplomats. Hollingworth followed her instincts and convinced a British diplomat friend to lend her his car. She drove, alone, to the frontier, and crossed into Germany. It was her first week on the job.

There in the fields she saw endless rows of large objects under burlap sacks. When the wind blew, she saw tanks. This was her first scoop: “1,000 German tanks massed on Polish border.”

The German invasion of Poland — the beginning of World War II — began just before dawn on Sept. 1, 1939. Hollingworth was again close to the frontier. She called the British Embassy, which at first refused to believe her. She said, well, listen to this, and thrust the phone out of the window as German tanks roared past. It was the first confirmation of the invasion that the British government received. Once again, thanks to Hollingworth, the Telegraph was first with the story.

It was the start of a long career as a war correspondent that took Hollingworth through World War II. After the war, she always seemed to be in the right place at the right time, in the words of one colleague. She followed conflicts throughout the Middle East, Algeria and Vietnam.

Hollingworth also played a role in saving many people’s lives. Before the war, as an aid worker, she helped thousands of people, mostly Jews, obtain British visas. This allowed them to get out of eastern Europe ahead of the Nazi storm. She continued to help refugees and displaced people after she became a reporter.

“It’s a part of her life that not many people know at all,” says Janine di Giovanni. Di Giovanni is a former war correspondent herself, and reviewed Hollingworth’s biography for the Spectator. She’s currently Middle East editor for Newsweek, and author of “The Morning They Came For Us: Dispatches from Syria.”

Hollingworth spent her later years living in Hong Kong, where she was a proud member of the Foreign Correspondents’ Club.

“She had her own table there,” says di Giovanni. “She would go there every day, sit there. She liked to have a beer for breakfast. And always, apparently — the legend is — that she still kept her bag and her shoes ready, in case she had to go run to do a breaking news story.”

In her mid-90s, Hollingworth fell victim to a scammer, a much younger man who managed to persuade her to give him control of her estate. He emptied her accounts. Hollingworth sued and he promised to repay the money. But much of it is still outstanding.

“[This] really surprised so many people,” says di Giovanni, “because she’d been so savvy and so sharp, and yet at the end of her life, someone had taken such terrible advantage of her.”

This article originally appeared on PRI.org. Its contents were created separately to USA TODAY.