The “Night of Broken Glass”

The “Night of Broken Glass” 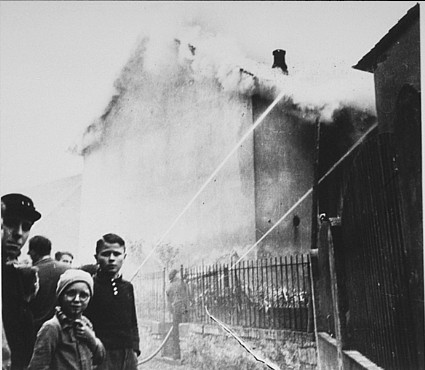 As the synagogue in Oberramstadt burns during Kristallnacht (the “Night of Broken Glass”), firefighters instead save a nearby house. Local residents watch as the synagogue is destroyed. Oberramstadt, Germany, November 9-10, 1938. — US Holocaust Memorial Museum, courtesy of Trudy Isenberg

On the night of November 9, 1938, violence against Jews broke out across the Reich. It appeared to be unplanned, set off by Germans’ anger over the assassination of a German official in Paris at the hands of a Jewish teenager. In fact, German propaganda minister Joseph Goebbels and other Nazis carefully organized the pogroms. In two days, over 250 synagogues were burned, over 7,000 Jewish businesses were trashed and looted, dozens of Jewish people were killed, and Jewish cemeteries, hospitals, schools, and homes were looted while police and fire brigades stood by. The pogroms became known as Kristallnacht, the “Night of Broken Glass,” for the shattered glass from the store windows that littered the streets.

The morning after the pogroms 30,000 German Jewish men were arrested for the “crime” of being Jewish and sent to concentration camps, where hundreds of them perished. Some Jewish women were also arrested and sent to local jails. Businesses owned by Jews were not allowed to reopen unless they were managed by non-Jews. Curfews were placed on Jews, limiting the hours of the day they could leave their homes.

After the “Night of Broken Glass,” life was even more difficult for German and Austrian Jewish children and teenagers. Already barred from entering museums, public playgrounds, and swimming pools, now they were expelled from the public schools. Jewish youngsters, like their parents, were totally segregated in Germany. In despair, many Jewish adults committed suicide. Most families tried desperately to leave.

OCTOBER 28, 1938
GERMANY EXPELS POLISH JEWS
About 17,000 Polish Jews are expelled by Germany and forced across the border with Poland. Poland refuses to allow the Jews to enter. Most of the deportees are stranded in the no-man’s-land between Germany and Poland near the town of Zbaszyn. Among the deportees are the parents of Herschel Grynszpan, a 17-year-old Polish Jew living in Paris, France.

NOVEMBER 7, 1938
GERMAN DIPLOMAT SHOT IN PARIS
Herschel Grynszpan, a 17-year-old Polish Jew living in Paris, shoots Ernst vom Rath, a diplomat attached to the German embassy in Paris. Grynszpan apparently acts out of despair over the fate of his parents, who are trapped along with other Polish Jewish deportees in a no-man’s-land between Germany and Poland. The Nazis use the shooting to fan antisemitic fervor, claiming that Grynszpan did not act alone, but was part of a wider Jewish conspiracy against Germany. Vom Rath dies two days later.

NOVEMBER 9, 1938
JOSEPH GOEBBELS DEMANDS RADICAL ACTION
German propaganda minister Joseph Goebbels delivers a passionate antisemitic speech to the Nazi party faithful in Munich. The party members are gathered in commemoration of the abortive Nazi Putsch of 1923 (Adolf Hitler’s first attempt to seize power). After the speech, Nazi officials order the Storm Troopers (SA) and other party formations to attack Jews and to destroy their homes, businesses, and houses of worship. The violence against Jews lasts into the morning hours of November 10th, and becomes known as Kristallnacht—the “Night of Broken Glass.” Several dozen Jews lose their lives and tens of thousands are arrested and sent to concentration camps.

NOVEMBER 12, 1938
NAZIS FINE JEWISH COMMUNITY
The Nazi state imposes a fine of one billion Reichsmarks ($400,000,000) on the Jewish community in Germany. Jews are ordered to clean up and make repairs after the pogrom. They are barred from collecting insurance for the damages. Instead, the state confiscates payments owed by insurers to Jewish property holders. In the aftermath of the pogrom, Jews are systematically excluded from all areas of public life in Germany.

You are here: Home » The “Night of Broken Glass”