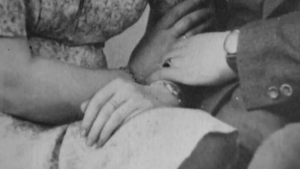 Survivors laid wreaths at what’s known as the “Death Wall” to mark the day of freedom and remember those who never left. More than one million people were killed at Auschwitz in Poland during World War II. The majority were Jews and the former extermination camp is the world’s biggest Jewish cemetery.

Survivors have found their way to new lives around the world. Including right here in the Corridor. Today one local woman who says every day is a Holocaust memorial day shared her very personal story with CBS 2 News Reporter Mellaney Moore.

“They were amazing people. They showed us how to be independent, how to be great advocates for ourselves and how to achieve anything we wanted to achieve,” says Lena Gilbert, the daughter of two Holocaust survivors.”

That’s how Gilbert remembers her parents, now buried at a small Jewish cemetery in Cedar Rapids.

“This is an abbreviation in Hebrew for the words ‘Here lies,’” she says.

Her parents were immigrants from Poland and took the names Fred and Ann Gilbert when they came to the states in 1949.

“He was in Auschwitz. He had a tattoo on his left forearm with his number,” she says.

Later on in high school, as Gilbert’s history classes learned about the Holocaust, her parents became more comfortable sharing their story.

“It was quite a bit more impressive for my father to sit with a group and roll up his sleeve and show that tattoo that stayed with him until the day he died,” she says.

Gilbert says her parents never let their experience in the camps define them. They were married more than 60 years. She says her father became the general manager of a steel company and her mother was a homemaker, cook and talented seamstress.