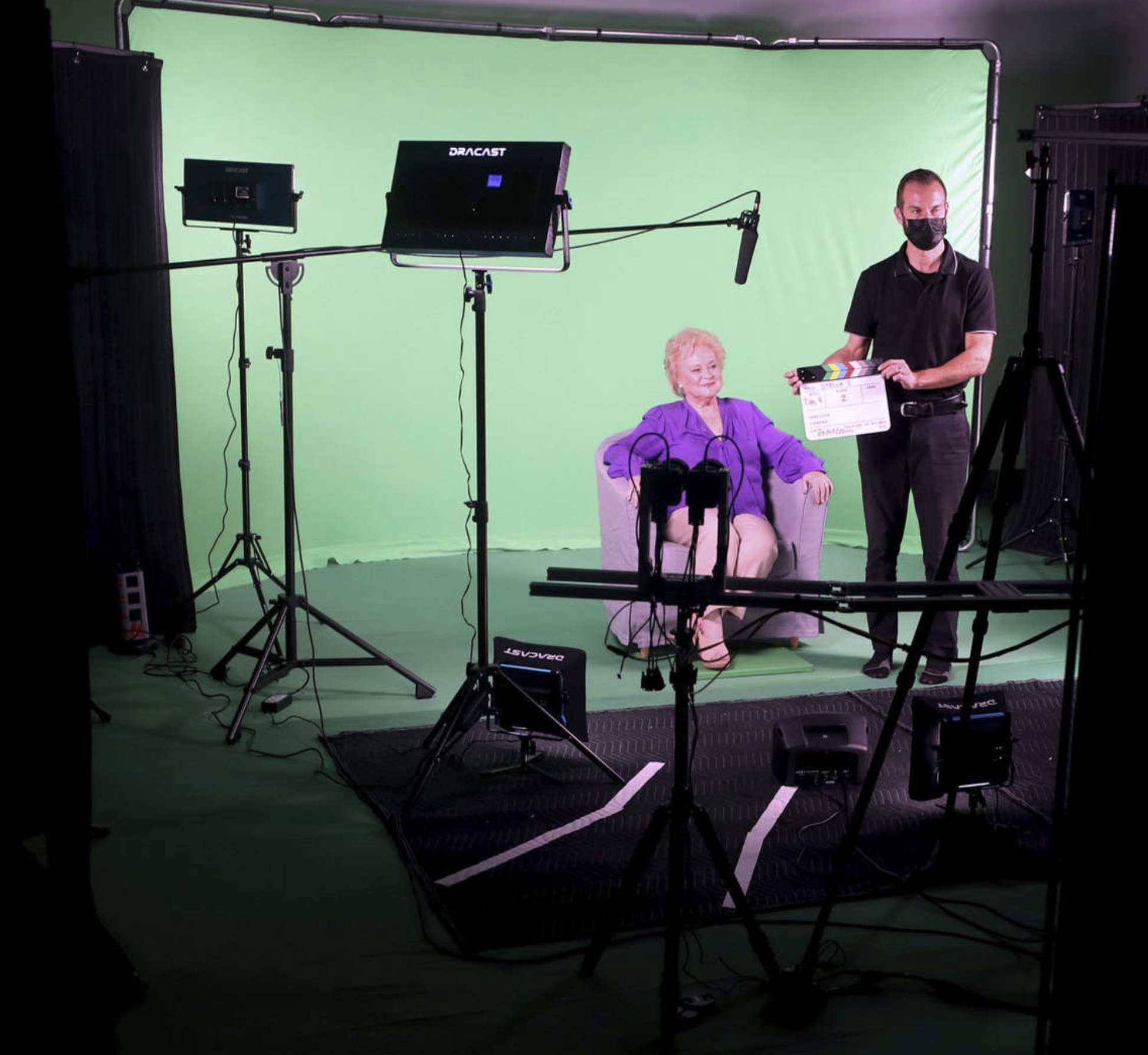 With help from the video magic of director Steven Spielberg and his team, the Holocaust survivor from Aventura has an answer for almost every conceivable query. About her life before World War II, her marriage, her kids, her favorite color: The Spielberg crew has thought of it all, more than 1,000 questions most likely to be asked by museum visitors and curious kids.

Years from now, Sonnenschein and other survivors will still be able to share their stories, thanks to a new technology that anticipates questions from museum-goers and offers answers from the survivors on video. The technology, called Dimensions in Testimony, will be available in South Florida at the Holocaust Documentation and Education Center in Dania Beach.

Sonnenschein, 86, and Holocaust survivor Morris Dan of Margate, 96, submitted to hours-long interview sessions over the past few weeks, answering questions from representatives of the USC Shoah Foundation, founded by Spielberg in 1994. The interviews were recorded on a set at the Dania Beach museum.

Several museums are already using the interactive program, including Holocaust centers in Los Angeles, Cincinnati and Dallas. Visitors ask survivors who appear on video screens questions such as “What was life like before the war?” and “Do you feel hope for the future?” The technology allows an accurate response by transforming frequently asked questions into search terms and matching the words to the appropriate response from the survivor.© Mike Stocker / South Florida/South Florida Sun-Sentinel/TNSDavid Rockwell gets the filming started for Stella Sonnenschein at the Holocaust Documentation and Education Center in Dania Beach on Thursday, March 3, 2022. Steven Spielberg’s Shoah Foundation is filming two South Florida Holocaust survivors for its Dimensions in Testimony project, which uses advanced filming techniques and AI to create a life-like, real-time experience providing audiences the opportunity to have a conversation with a Holocaust survivor.

The goal: to connect museum-goers with those who experienced World War II through conversation, as most visitors likely have never met anyone before who was born in the early 20th century.

Surveys over the past few years show a surprising number of Americans know little about the Holocaust, the systematic murder of 6 million European Jews by the Nazis during World War II. After the war, Holocaust survivors dispersed around the world, mostly settling in the United States and Israel. Today, the youngest survivors, born during the war or just before, are in their 80s.

Precise numbers of how many are still alive are hard to find. In 2021, the Conference on Jewish Material Claims Against Germany, which pays reparations to people who lived through the war, distributed money to more than 210,000 survivors in 83 countries. But not every survivor receives such payments. Many chose to leave the brutal years of the war behind them as they started over and created new families in a new country, staying out of reach of social service agencies that could track them.

In South Florida, there are about 10,000 survivors in Miami-Dade, Broward and Palm Beach counties, down from a peak of about 40,000 in the 1970s and ‘80s, said Rositta Kenigsberg, president of the Dania Beach center.

Although many South Florida survivors have visited schools for decades to share the stories of their lost families and the perils of Holocaust denial, there’s still a shocking lack of knowledge about the Nazi regime’s destruction of European Jewry. A 2018 survey by the claims conference found about a third of Americans believe fewer than 6 million Jews were killed during the Holocaust, and 45 percent of respondents couldn’t name a Nazi concentration camp or ghetto.

Despite the knowledge gap, Holocaust denial remains very rare in the United States; 96 percent of respondents said the genocide was real. Florida has mandated Holocaust education in schools since 1994, but there’s little funding for the lessons and it’s up to principals to implement as they see fit.

Educators see projects such as Spielberg’s as increasingly essential as the World War II generation ages and students have fewer relationships with elders who can share their stories from that era. Time is running out to interview those who suffered greatly in the Holocaust and want the world to know.

Fortunately, at 96, Morris Dan is still able to tell his life story.

Dan sat for five days of interviews with the Spielberg project in Dania Beach last week. He was born in Ciechanow, Poland, and was 16 when he was sent to the Auschwitz extermination camp by the Nazis, who occupied his town a few weeks after invading Poland in 1939. His mother, two sisters and younger brother were killed in the camp, and another brother was murdered shortly after. As Russian troops approached in 1944, Dan was forced to march to several other camps, finally arriving in Czechoslovakia, where the Czech people offered the prisoners food and shelter. In 1949, he was able to move to Canada with his surviving brothers. He started a building company, married and had two children, moved to New Jersey and then to Florida. He has lived in Margate for the past 15 years.

Sonnenschein’s story is also filled with twists of fate that saved her life. She was born in Warsaw in 1935 and her family was forced into the Warsaw Ghetto in 1939. She initially hid in her father’s factory, but her parents decided to have her smuggled out of the ghetto, posing as a Catholic orphan whose parents had been killed. She lived with several Polish foster families and never revealed her true identity.

Her father and brother were killed during the war but she reunited with her mother in 1946. They moved to Israel in 1950. She met her husband there in 1958 and they moved to the United States, where they had two children.

The children, Howie and Gail, watched their mom record her interviews at the museum last week. They said she has always answered their questions about her traumatic childhood and efforts to live a happy life but they learned several new tidbits during the sessions.

“Although I knew that my mother loves watching light comedies like ‘Everybody Loves Raymond,’ I was surprised to find out that she also likes to watch TV programs about Hitler’s last days,” said Gail, a lawyer from Sunny Isles Beach.

“I discovered that she doesn’t like to watch football or any other contact sport because she finds it too violent and it affects her viscerally,” said Howie, a photographer and TV producer in Miami Beach.

The Spielberg interviewers clearly anticipated almost every possible question a museum visitor could ask, including survivors’ favorite TV shows and sports. But they asked Sonnenschein and Dan to record a fallback response to questions they may not have thought of: “I can’t answer that.”