‘Joe’s Violin,’ From Germany to the Bronx 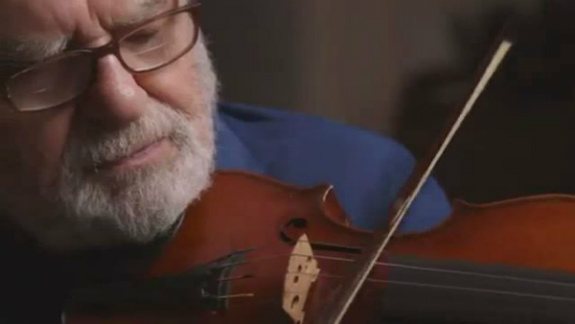 Joe’s Violin, one of the most remarkable Jewish-themed films of the year, was screened at New York’s School of Visual Arts’ theater Monday night—assumedly to help hype its Oscar nomination in the short subject documentary category. The 24-minute film, which can be viewed via The New Yorker, tells the story of 91-year old Joseph Feingold, a Warsaw-born, Upper West Side resident who decided to donate a violin he acquired in a displaced persons’ camp in Germany just after World War II to New York classical station WQXR’s musical instrument drive.

Joe’s Violin is the work of Kahane Cooperman, a producer for The Daily Show who got the idea for the film when she heard a brief mention of a Holocaust survivor donating his violin when she was listening to WQXR during her drive to work. She was seized with the feeling that the violin’s donor and recipient both had stories worth telling, and that she should be the one to tell them.

Feingold experienced a facet of the Holocaust that’s barely even discussed these days, and that’s largely absent from most popular treatments of the genocide. According to the film, the 17-year-old Feingold and his father fled east from Warsaw into Soviet-held territory after the Nazis invaded. They were arrested and sent to separate labor camps in Siberia, becoming two of some 300,000 Polish Jews that Stalin imprisoned during the war. Feingold spent six-and-a-half years in the gulag before the Soviets allowed him to return West. He reunited with his father, and with a brother who had survived Auschwitz. The last letter he received from his mother in Warsaw contained hopeful lyrics from “Solveig’s Song” by the Norwegian composer Edvard Grieg, referring to a future reunion. The reunion never happened: Feingold’s mother and younger brother perished at Treblinka.

Seventy years later, the violin ended up with 12-year-old Brianna, a student at the Bronx Global Learning Institute for Girls charter school and the daughter of immigrants from the Dominican Republic. Remarkably for someone so young, the sunny and uncannily empathetic Brianna understands that the instrument is important beyond itself. When she meets Feingold for the first time, she plays a heartrending “Solveig’s Song,” and he’s stunned into grateful silence. Feingold’s story connects this song to unfathomable cruelty and loss; in Brianna’s hands, song and instrument epitomize art’s ability to salvage hope and meaning out of the bleakest depths of human nature. The violin also represents the transfer of historical memory: Feingold is 91. Because of the violin, which will be passed on to a different, specially selected student at the arts-minded Learning Institute every two years, his story will be told and remembered long after the last Holocaust survivor dies.

As Cooperman explained during a panel discussion after the screening on Monday night, it’s occurred to her in the months after Donald Trump’s election that Joe’s Violin is an immigrant story and a vision of “this country at its best.” Her film shows America as the antidote to history’s tragedies, even for the people who experienced them first-hand: Since arriving in the U.S. in 1948, Feingold became a professional architect, raised a family, and forged a deep and unlikely connection to a girl 79 years his junior, with whom he would appear to have virtually nothing in common aside from a shared homeland and a love of music.

For some viewers, Joe’s Violin movie is bound to take on a special meaning in light of president Donald Trump’s desire to construct a wall on the U.S.-Mexican border and temporarily halt the flow of refugees from the Syrian civil war. One such viewer is former Daily Show host Jon Stewart, who moderated the post-screening panel discussion with Cooperman. “It’s a shame a film like this in a time like this just has no resonance,” Stewart quipped. It will be a further shame, he added, “to see [the movie’s two principals] deported, in Donald Trump’s America.”

In recent appearances, Stewart has suggested that he’s pulled a Hillary Clinton-like vanishing act, retiring to a simple and contemplative woodland existence while the rest of the world burns. On Monday night, however, it was as if he’d never really left: Stewart hasn’t grown a David Letterman hermit beard, and his Daily Show persona never felt all that distant. He worked in a trademark George W. Bush snicker as if he’d been itching to try it out one more time, and he even briefly slipped into that New York tough guy accent that once seemed to crop up once or twice an episode. It’s hard not to be curious whether Stewart harbors a sense of regret at leaving The Daily Show behind—just when things started to get weird. But maybe he got out at exactly the right time, just when The Daily Show’s particular brand of partisan therapy would begin to seem especially facile. By remaining just slightly out of public view, Stewart has stayed untainted in the new era, wise to the dangers it poses for political satirists who run the risk of appearing overly earnest, shrill, or hysterical even under more normal conditions. For the time being, bringing attention to a movie like Joe’s Violin is just about the best possible use of his cultural stature.

Armin Rosen is a New York-based writer. He has written for The Atlantic, City Journal, and World Affairs Journal, and was recently a senior reporter for Business Insider.