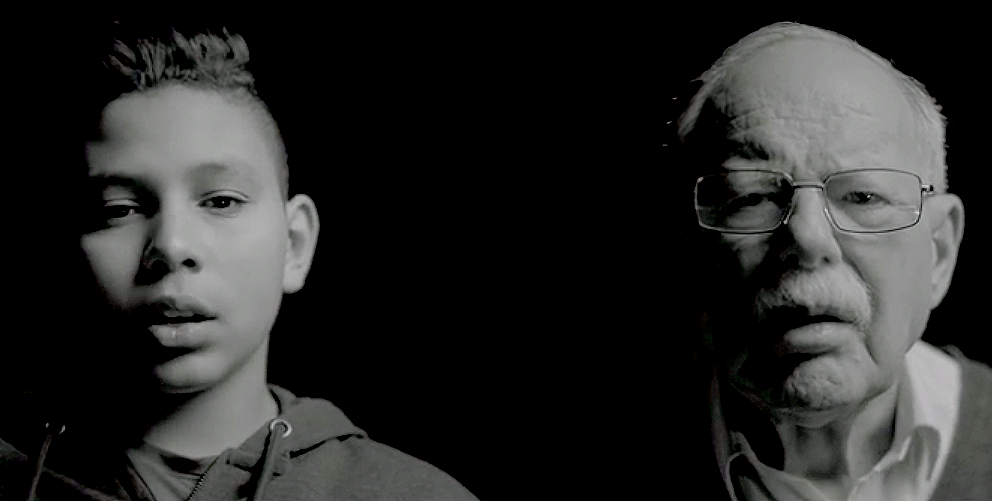 Harry Jacobi is in a new film for Unicef that compares his experience of being a WWII refugee with Ahmed’s story about his escape from Syria.

Jacobi escaped the Holocaust when he was a teenager in 1938 and ended up in the UK. Now 91 years old, he holds an MBE and is a vice-president of Liberal Judaism. He has taken part in a new film for Unicef, created by 180 Amsterdam, which shows the parallels between Jacobi’s story and that of Ahmed, a Syrian refugee.

Tell us your story

After Kristallnacht of 1938, my mother sent me away by Kindertransport to Holland in February 1939. On 10 May 1940, Holland was invaded by the Nazis.

A non-Jewish woman hired buses to take the children to the port, where she persuaded a cargo boat captain to take 40 children and a few adults on board.

While crossing the Channel, the ship was strafed by Nazi fighter planes aiming to sink it. I was on deck and managed to roll under a lifeboat just in time. The ship was reported as sunk on German radio but, in fact, had moored outside Falmouth for three days, while the British government decided whether the passengers would be allowed to land or not.

Finally, the British government allowed the boat to dock and let the children come to safety.

The refugee committee in Amsterdam arranged some houses for us and I spent the war years in Manchester. We were understandably very confused at the time of our arrival – we didn’t know what was happening, but we were happy because we escaped the Germans. We felt safe.

What advice do you have for getting through difficult times?

Why did you want to work with Unicef?

I was introduced through the Association of Jewish Refugees and was more than happy to participate in such a worthy cause.

In 2016, I travelled to the Calais jungle and I’m committed to helping Syrian refugees. Many young refugees endured far more traumatic experiences than I did, so I have a huge amount of empathy for them.

What do you think about the current state of the world?

It’s very upsetting. Since World War II, the government has had a quota of refugees allowed into the country, but there has never been any sense of urgency. My mother also had the possibility to come but never made it because of this.

We’ve seen this happen today with the Dubs scheme amendment – the government promised to accept 3,000 children but has only taken in about 150.

What have you done since you arrived in the UK?

I was 15 by the time we arrived and children left school at 14 back then, so I could not go to school in England. I started work as an errand boy/shop assistant before working in a garage, then volunteered for the Jewish Brigade from 1944 to 1946.

Following this, I served with the British Army as an interpreter on the Rhine in Germany until 1947, when I got British nationality. I then moved to Amsterdam, where my uncle had set up a pyjama/lingerie factory and I worked there until 1949.

I then settled back in the UK and was ordained as a Liberal rabbi in 1961. I served at a number of synagogues and then went to Zurich to help the Liberal congregation there develop and grow.