Millie Jasper understands that six million is a tough number to get your head around.

Jasper, executive director of the Holocaust and Human Rights Education Center in White Plains, helps tell the story of the Holocaust, of six million Jews killed by the Nazis and their collaborators.

She sends out 25 speakers — Holocaust survivors and two men who helped liberate Nazi concentration camps — who speak to about 20,000 students each year, helping them to understand what they saw, what they lived.

The speakers help to reduce that too-hard-to-fathom number to one, to put a human face to the atrocities.

But sometimes, there’s value in seeing six million. So Jasper has a thick book in the lending library in her offices on the third floor of an office building off Westchester Avenue.

On each page is written one word: Jew.

Flip through the pages, as Jasper did on Thursday, and the staggering death toll hits you.

Friday is the day to reflect on those numbers, those lives, those pages.

“Jan. 27, 1945, was the day that Auschwitz-Birkenau was liberated by Soviet troops. Holocaust Remembrance Day, ‘Yom Hashoah’ in Hebrew, was established in 1951 by the Israeli Parliament. The date was chosen to coincide with the anniversary of the Warsaw Ghetto Uprising and with the liberation of concentration camps in western Europe,” she said.

Jasper suggests that the best way to mark Holocaust Remembrance Day is to “become an upstander, not a bystander.”

“We teach the students and teachers to recognize hatred, actions of bigotry, actions of prejudice, and that’s where it starts,” she said. “Are we going to be able to stop a murderer? No. Can kids stand up against bullies? Yeah. They can be taught to do that.”

When she thinks of the Holocaust, she thinks about “the vibrant lives and cultures that were lost.”

Her speakers — the survivors and the liberators — “are the most dynamic, strong, positive-thinking people I have ever met.”

“They’re all in their upper 80’s and 90’s,” she said. “They have established family lives and wonderful careers, friendships, they’re involved in their community and they have no room in their life for hatred. Never ever do I hear an angry word from any of them.”

The Holocaust Museum & Center for Tolerance and Education at Rockland Community College in Suffern held a daylong interfaith event Tuesday, with an exhibit and film screenings, said Amy J. Sanogueira, the museum’s education director. But the museum’s mission — never again — is fulfilled year-round. 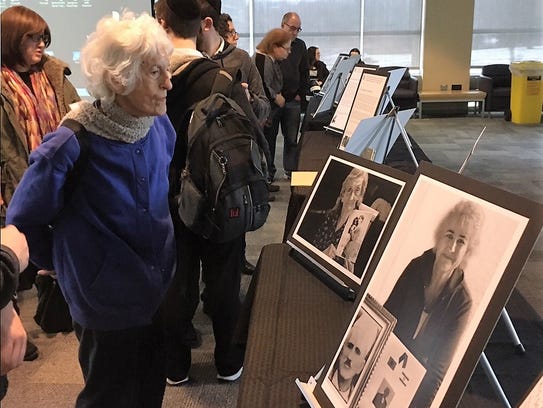 “After the Holocaust, one would think that the world would have learned, but we haven’t,” Sanogueira says. “Think of all of the genocides that followed: Rwanda, Bosnia, Sudan, Cambodia, the list goes on and on. There are countries on genocide watch right now. You just wonder when will we learn. Where are we now? We’re in a divisive and hateful time right now in our own country and around the world.”

Asked how people should approach International Holocaust Remembrance Day, Sanogueira echoed Millie Jasper while taking a longer view: “Be an upstander. In everything you do in your life, make the choice to do the right thing. If we always choose the right option, the right choice when we have the opportunity to make a difference, we’ll already know to do that.”

No place for malice

Dr. Syed Ali, adviser to the Muslim Student Association/Center for Muslim Life at Rockland Community College, and administrator and trustee of the Masjid Iqra Religious Center Mosque in Suffern, Rabbi Dov Oliver, the rabbi at RCC for the Center for Jewish Life/Hilel, and Mufti Saliman Qaice, Imam and head of Islamic Studies at Suffern Mosque were on hand at the Holocaust Museum & Center for Tolerance and Education Tuesday for an International Holocaust Remembrance event. (Photo: Holocaust Museum & Center for Tolerance and Education)

“She’s just an amazing person,” Sanogueira said. “Trudy just leaves us with hope, in the goodness of people. That’s her message: Be responsible. Be kind. And don’t give up. She’s a testament to that. She doesn’t hold malice.”

Most survivors, Sanogueira says, “will say that in some regard they survived because of luck, if you can say that anything was lucky in that situation. Being a split second here or a split second there could have changed things.

“What kept Trudy going was that she believed her family was still alive and she didn’t want them to suffer that she wouldn’t be alive. She stayed alive for her family. That was her hope, that she be reunited with her family and that kept her going day after day after day.”

She didn’t know that her father, mother and two little sisters had been killed.

“Her father died on a death march shortly before the war ended, and her mother and two sisters were killed immediately upon arriving at Auschwitz,” she said. “But Trudy didn’t know that. She lived in the hope of seeing her family again.”

A spread from the book “And Every Single One Was Someone” which has the word “Jew” printed six million times for those killed in the Holocaust. The book is at at the Holocaust and Human Rights Education Center in White Plains.

reposted from the Journal News