Aharon Appelfeld and the Truth of Fiction in Remembering the Holocaust 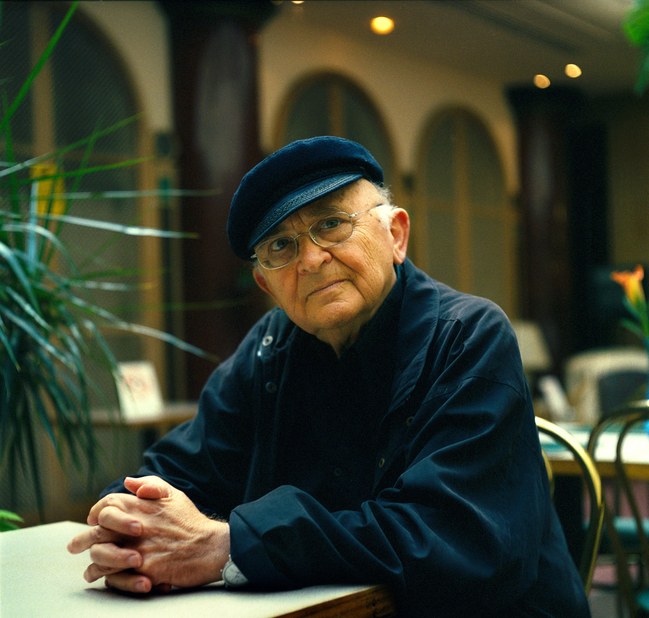 “I’m a hero in one of Philip Roth’s novels,” the Israeli writer Aharon Appelfeld told me, nearly twenty years ago, over lunch at a Jerusalem café where he liked to work. It was the sort of thing that a Philip Roth hero would say, particularly in the book in question, “Operation Shylock,” a mashup of nonfiction and fiction, in which Roth goes to interview Appelfeld at the same café where I met him, and, while he’s in Jerusalem, gets embroiled with a zealous impostor who is posing as the real Philip Roth. The interview itself is the real deal, not a work of imagination but, rather, an uncommonly intelligent piece of literary journalism, which had run in the Times years before Roth wove it into the book. But, just as Roth has his fictional double in the book, Appelfeld, too, is present there both as a nonfictional voice and as a character who is, in significant respects, Roth’s invention. This experience, of being a novelist who got novelized, had taken Appelfeld by surprise. He said Roth never let on that he was going to do that to him, and it was strange to have people calling him to ask if he really was a member of the Mossad, as the book suggested. But Appelfeld didn’t mind. “It never disturbed me because Philip is a good friend of mine, and I know I am in his fantasy,” he said, and he added, “I always felt that fiction was the way to the deepest truths.”

Appelfeld, who died yesterday, at the age of eighty-five, was one of the subtlest, most unorthodox, and most exactingly perceptive novelists to make the memory of the Holocaust his abiding project. He was born in Romania, and was eight when the war became his life. His mother was killed. He was deported with his father to Trans-Dniester, in Ukraine. He escaped alone from a concentration camp there. He sustained himself for three years as a vagabond farm-laborer. He wound up for a while as a kitchen boy in the Soviet Army. He fetched up next in a refugee camp, then on a kibbutz in Palestine, then fighting in the Arab-Israeli war of 1948. At that point he was just sixteen, and felt totally inhabited by overwhelming memories, yet at the same time unable to summon anything like a complete or precise account of any part of his lost boyhood or his odyssey through hell. So he began, over the ensuing decade, to write stories. “I remember something, but not too much,” he told me. “Therefore I’m writing fiction, because I understood immediately that my memory is weak and I must fill it with imagination.”

He said, “My first book was called ‘Smoke,’ about immigrants living mainly on the shore, on the beach at Tel Aviv, in tents. Smugglers, black-marketeers, a kind of bohemian, smuggling life. Everything was lawless, and the lawlessness was with a purpose, against the state, against control.” Dazed and wild, they had created a new sort of camp life as a form of defiance, a rejection of ever reclaiming all that had been broken in them. There was nothing ennobling, in Appelfeld’s view, about surviving the Holocaust. There was a feral vitality, perhaps, but the damage and the haunting were forever; and, he said, “Nobody wanted to publish it.”

He said, “When I came to Israel, the slogan was ‘Forget.’ Until the late sixties—‘Forget.’ And if you talk about the Holocaust, then, only the heroic part—partisans, not the camps.” When he finished writing “Smoke,” in the late fifties, he could hardly have cut harder against the grain. “They wanted literature to educate the young. It was very socialist-realist.” Israel, in those early years, was secular, agrarian, collectivist. The socialism, Appelfeld said, gave Zionism a missionary quality. “It was a spiritual element, but then it went out.Then it was money, money, more and more, so, no wonder people retreated back to religion. It’s part of a quest for Jewish identity. Zionism by itself no longer offers that—the sense of purpose and meaning.”

Appelfeld was small, round-faced, a man with the puckish look of a very old boy, and a voice as gentle as everything he said was firm. He was in his mid-sixties then, and spry—there was nothing elderly about him—but he gave you the feeling of being in the company of someone who had become a wise man a long time ago. He had written almost always about the past, often from the bewildered perspective of a displaced child unprotected among clueless adults, blinkered to the dangers around them—blundering, self-deceived, as the Holocaust consumes them. He was writing against oblivion in the midst of a people fixated on reinvention.

He said, “Jews were first a tribe. ‘Nationality’ is a word that was never used by Jews. You were either a Jew or not a Jew. Zionism introduced the word. Zionism was making a claim for normality. Let’s be like the French or the English. Zionism created a limited view of the Jew, as something that is only here—the new nation, the new Jew. And so there is no understanding of the diaspora—Zionism didn’t want it—and that’s false. Because Jewish history is a history of diaspora, and this is a nation of immigrants. Separating oneself intentionally and internationally from other Jews is a stupidity. I was attacked a lot for not doing that. Why is he always bringing us the old Jews? So I was called ‘too Jewish’— preoccupied too much with the Holocaust.”

Appelfeld wrote many books, almost every year or two another novel, and he wrote with ever greater mastery, and in time he found an expanding readership: those who had no such memories of their own. “Survivors won’t touch my books,” he said. “Too painful. But children whose parents told them nothing, or a distorted story—they are coming to my books now with a great hunger.”

He said, “For years, I was an officer in charge of culture in the Army. So my first question was always: Where were your parents born? What did they tell you? The answer: nothing. Not the name of a camp. Not the name of the village where they were born.” He said, “In Israel, because it was a society of survivors and because they did not tell their children, there’s a great dark hole in the lives of their children, and this hole can create curiosity. But much more it creates superficiality.” He said, “It was this absence of the experience of the parents that made the children Israelis.”

There were always people who urged him to write a memoir, but, he said, “Memoir cannot get so easily and openly into the intimate matters that are open to fiction. Memoir is more restrained.” Still, there were some memories that seemed to him impossible to turn into fiction. History deals with facts, he said, but literature had an additional challenge: “Literature has to build in reason. You cannot just say, ‘He loved her.’ You have to show why.” That was the problem: some facts resisted reason. “Coincidence,” he said. “To believe in it, you have to be a religious person. I mean, it’s only from the religious point of view that there is no coincidence. So coincidence unexplained implies religion.”

I had once heard Appelfeld’s old friend Philip Roth say, “Sometimes it’s really interesting to pretend to be someone you are.” That seemed very close to how Appelfeld approached his work, and yet he was also saying something different: that in his experience there were some things that you just couldn’t pretend made sense. For instance, he had made his way in the world as an orphan since he was a child of eight or nine, and then, decades later, he had learned that his father was living in Israel. Now, forty years afterward, the emotion of their reunion was still too much for his imagination. “The story of my father,” Appelfeld said, “I would not use it as fiction, because it’s a bit miraculous. In life you can say it happened, but in literature you have to give good reasons: Why did it happen?”