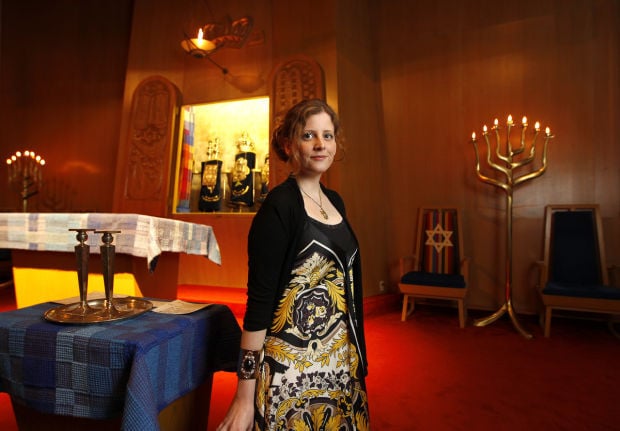 Erin Maidan, a former board member at the Sons of Jacob Synagogue in Waterloo, knew she wanted to study Judaism from an early age.

CEDAR FALLS | Astronaut, doctor, firefighter, teacher. When Erin Maidan was a child, those were typical responses to the age-old question posed by adults, “What do you want to be when you grow up?”

Maidan’s response was unwavering: “A rabbi.”

Maidan is a longtime member of the Sons of Jacob Synagogue in Waterloo. As the synagogue begins its transformation into a community-led organization, Maidan and other women are stepping into roles as leaders and educators that traditionally have been male. She was the youngest board member in the synagogue’s history, serving two terms.

Her expertise places her on the religious side of synagogue activities, such as bar and bat mitzvah training, teaching Hebrew and conducting services.

Although as a traditional Jew she will never be called “rabbi,” the 33-year-old Maidan made the decision long ago that advancing her knowledge of Judaism was more important than any title.

“I wanted to work with the ancient texts, to study Hebrew, to learn our history, and it is a lifetime of learning.

“The question is always there: ‘Where does my feminism meet my faith?’ You can be feminine and traditional. You’re never more respected as a woman in the religious world than in the Jewish culture.”

Maidan is the daughter of Henry and Sandy Maidan of Cedar Falls and granddaughter of Holocaust survivors Josef and Sonia Maidan. Polish Jews, her grandparents were separated and imprisoned by the Nazis during World War II. Her grandmother was liberated from Auschwitz, and her grandfather survived both Bergen-Belsen and Dachau.

Following her 1999 graduation from Waterloo’s West High School, Maidan attended Brandeis University in Waltham, Mass. She created an uproar in her family when she decided to work on her honor’s thesis on Jewish-German relations at the University of Heidelberg in Germany.

“Everyone freaked out. I’d started talking about it two years before I left, that this is what I needed to do, to see the places where we came from, to understand what happened, and my family was upset. They asked me, ‘How can you want to go to a place that wanted to kill us?’” Maidan says.

She found an ally in her grandmother, Sonia. “She was the most supportive person. She wrote down addresses of where she’d lived, places for me to visit — Berlin, Prague, Budapest, Krakow. My grandmother wanted me to take a photo of the Warsaw Ghetto so she could see how it had changed. She sent me on a pilgrimage, another reason that trip was so important to me.”

The largest of the Jewish ghettos in Nazi-occupied Europe during World War II, the Germans murdered or deported about 300,000 Jews in the Warsaw Ghetto, according to historians. Maidan also spent time at Auschwitz. Sonia Maidan told her granddaughter the bunk number she’d been assigned at the death camp — “and it was still standing. I saw it,” Maidan says.

Her experiences were both emotional and healing. “It brought out things I didn’t even know were inside me. It better prepared me to help other people in my life.”

Returning home, Maidan graduated in spring 2003. It wasn’t long before she packed a bag and moved to Israel. She studied the Torah at a women’s orthodox seminary, Midreshet B’erot Bat Ayin in the West Bank village of Bat Ayin, and got married.

Later she used her language skills in helping create the first international scholastic database of Theodor Herzl’s writings for the Zionist Central Archives in Jerusalem. Herzl was the visionary of modern Zionism and reinstitution of the Jewish homeland. She then went to work for the Reparation’s Committee for the Knesset, Israel’s government.

Maidan channeled her creativity into designing wood furniture, too, building a lucrative business. Feeling a lack of technical expertise, she returned to Iowa with her husband and enrolled in the interior design program at Hawkeye Community College.

She also began struggling with health issues in Israel. She fell ill in the West Bank, recovered, then awakened to find her lower extremities paralyzed. Getting proper diagnosis and medical care was difficult because she lacked transportation out of the village to a larger medical center. She eventually recovered her mobility and gained strength hiking in the mountains of the West Bank.

Back in Iowa, the problem reoccurred. Eventually she was diagnosed with transverse myelitis, a rare inflammatory disease causing injury to the spinal cord and nervous system scars that interfere between nerves in the spinal cord and the rest of the body, according to the Mayo Clinic.

Her marriage ended in divorce and she realized her chronic condition precluded returning to Israel.

“On the upside, it changed my ability to relate to people in my (religious) community. There are lots of elders, and it changed their perception of me as someone who can understand what they are going through. It has increased the level of confidence people have in me, and that I have in myself.”

Maidan described herself as “extremely ambitious and energetic. I believe my time is short. The days I have are limited, and I want to elevate the darkness. I want to help people create a relationship with the Almighty, for the synagogue to be relevant to people, to provide for our people and end Jewish isolationism in Iowa.”

It is a question of respect, she adds.

“Knowledge creates respect. It’s not about what you do for a living, but who you are inside, how you treat people and how you behave in the world.”

Copyright 2014 Waterloo Cedar Falls Courier. All rights reserved. This material may not be published, broadcast, rewritten or redistributed.

You are here: Home » Woman steps into leadership role at Waterloo synagogue