Underground in Berlin: A Young Woman’s Extraordinary Tale of Survival in the Heart of Nazi German 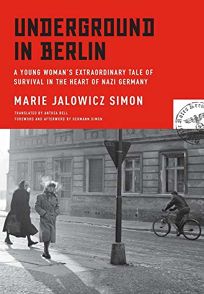 In this captivating story, Simon tells of her years in hiding as a Jewish woman during WWII. While still a teenager, she works as forced labor in a factory, leaving her middle-class life behind. Before Jalowicz is 20, she’s orphaned, losing both parents to illness, and must grow up fast. Having decided she won’t voluntarily submit to the Nazis, she’s even more determined after her aunt receives deportation papers in late 1941. She arranges to get herself fired from a factory and then convinces the authorities she’s already been sent away. She utilizes her time to walk different neighborhoods in Berlin, testing whether she will be harassed by police for not wearing the Jewish star and gaining the confidence she needs to mask her fear in encounters with Nazis or anyone suspicious of her. Jalowicz gets by on her wits, able to lie her way out of trouble when she’s threatened with arrest, and, amazingly, is never “denounced” by those who know the truth. Even more critically, she’s aided by family and friends, Jews and not, who give her food, money and most importantly, refuge. When friends learn of a foreign worker in need of a “wife”, she has the great fortune of being able to live in relative safety for the last two years of the war. Jalowicz’s story is unquestionably tragic in so many ways, but is also full of miracles, hope, and a future. Agent: George Lucas, Inkwell. (Sept.)

You are here: Home » Underground in Berlin: A Young Woman’s Extraordinary Tale of Survival in the Heart of Nazi German