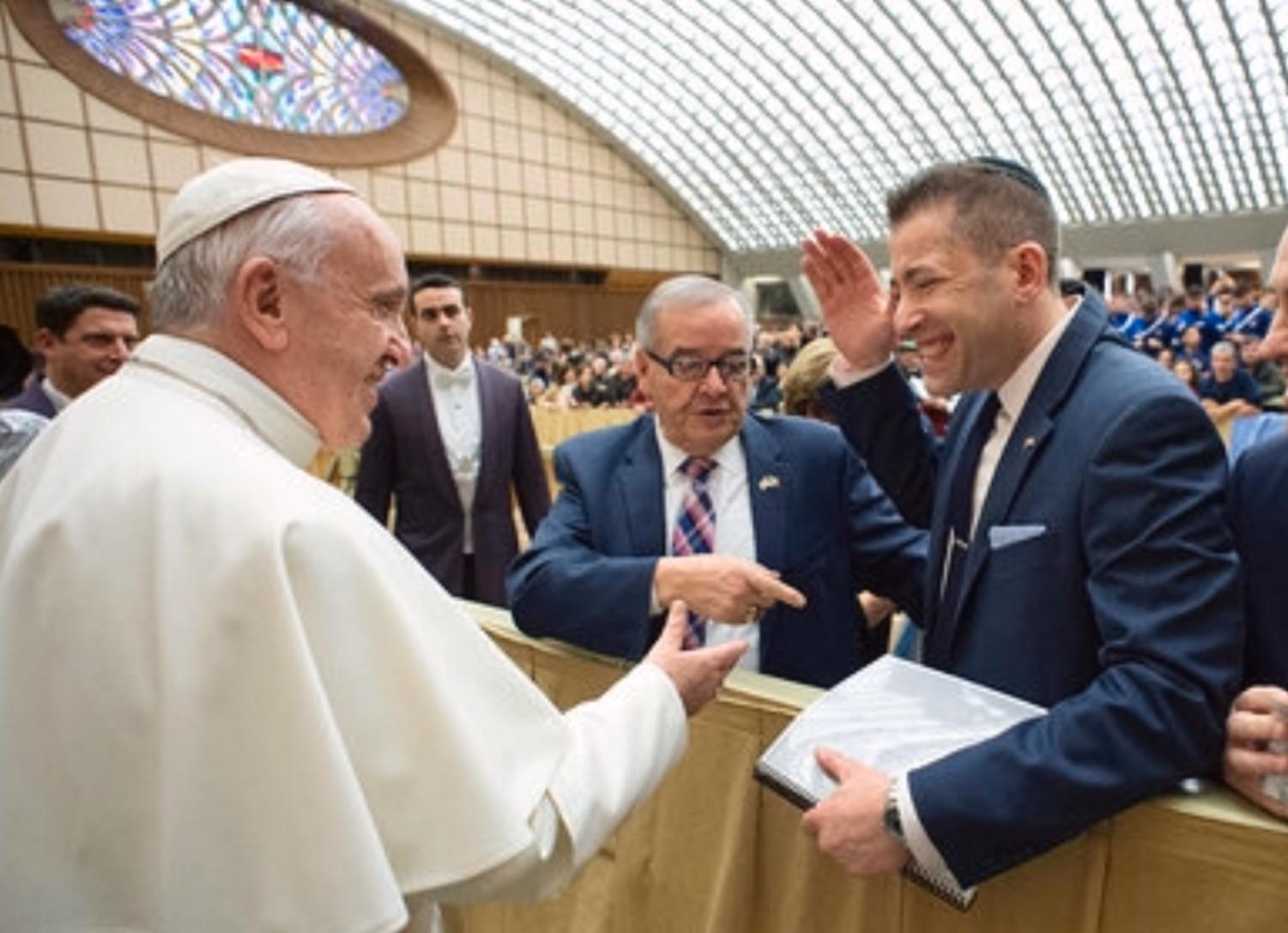 UI graduate Michael Weinstock was honored by Pope Francis for his assistance in finding the diary of a family hiding from the Nazis in WWII. Weinstock worked on telling the story of the Jewish family D’Urso’s father had rescued during the Nazi regime.

Pope Francis honored University of Iowa graduate Michael Weinstock this past week for his assistance in locating the relatives of a Jewish family that had hidden from the Nazis in the mountains of Italy during World War II.

“It’s extraordinary, and unexpected, and a little bit silly,” Weinstock said about his meeting with the pope.

Weinstock first became aware of the Ascarelli family and their survival story through his friend and New York Assemblyman Anthony D’Urso, he said. D’Urso’s father, Giuseppe, protected the Jewish family and brought them to safety.

D’Urso had been trying to track down the family his parents had helped since the early ’80s, Weinstock said, but he was never able to find a diary or any living descendants of the family. D’Urso had only known the patriarch of the family and their last name, Ascarelli.

One of the cousins who accompanied the Ascarelli family to the mountainside had written the diary, he said. D’Urso was never able to find this diary, because the cousin’s last name was not Ascarelli.

“First, I did what any normal person, young person would do these days,” Weinstock said and laughed. “I Googled the hell out of everybody.”

D’Urso told Weinstock that the Jewish family had lived in Naples before the war. This prompted Weinstock to Google “Synagogue Naples, Italy” and ask to speak to the oldest member of the congregation, he said.“

Before I went off to Italy, every time I said the sentence I had to stop and collect myself because it’s so extraordinary. It’s so ludicrous that I’d be invited to the Vatican to meet the pope.”

“I’ll tell you exactly what the old timer said,” Weinstock said. “He said. ‘Yes, I remember Mr. Ascarelli,’ and then he said, ‘His second wife wasn’t Jewish. He stopped coming around the synagogue after that,’ and it made me laugh.”

Weinstock said once he had spoken to the person at the synagogue, he knew he was heading in the right direction. He then went to Facebook and searched for anyone within 200 miles of Naples with the last name Ascarelli. R

“I scrolled through all of their Facebook profiles, all of their photos, and I crossed off the ones with Christmas trees, and I put checks on everyone with Hanukkah menorahs, and I started reaching out to them,” he said.

Using Google Translator, Weinstock asked each person if their grandfather was rescued from Nazis by hiding in the mountain in 1944, he said. Eventually, he located the granddaughter, prompting the reunion of families.

“They may have thought I was nuts, but nearly everyone I reached out to responded,” he said.

After finding the family, Weinstock and D’Urso were invited to the Vatican to be honored by the pope. Weinstock said it was an extraordinary experience.

“He was clearly funny and engaging, and I got the feeling that most of the people that meet him in similar circumstances are devout Catholics who are justifiably nervous and blown away, and I was just really enjoying the moment, and it comes through in the photos,” he said.

Weinstock said he was trying to absorb everything and he had to “stop and collect himself” numerous times when thinking about how he was being honored.

“Before I went off to Italy, every time I said the sentence I had to stop and collect myself because it’s so extraordinary,” he said. “It’s so ludicrous that I’d be invited to the Vatican to meet the pope.”

shared from The Daily Iowan