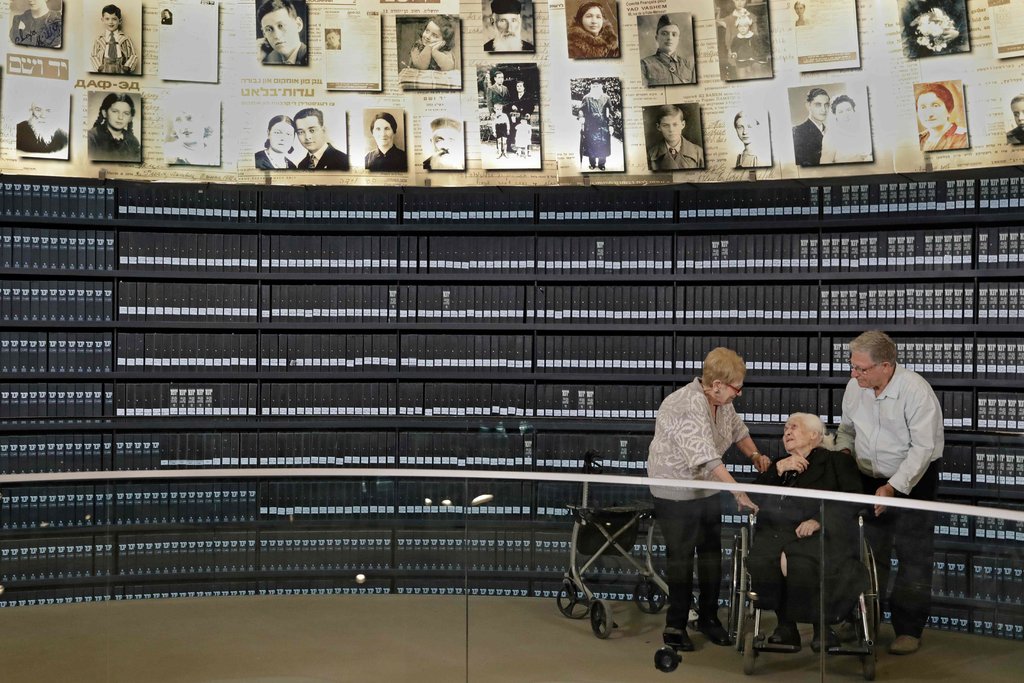 Melpomeni Dina was reunited with the two surviving members and 40 descendants of the Jewish family she and her sisters helped escape occupied Greece during World War II.

Sarah Yanai, an 86-year-old Holocaust survivor, clutched the handle of her wheelchair as she closed her eyes, and then opened her arms to embrace the woman who helped save her and most of her family from the Nazis more than 75 years ago.

“How are you, how are you Melpo?” Ms. Yanai asked in Greek while stroking the cheek and silver hair of Melpomeni Dina, the 92-year-old Greek woman who, along with her two sisters, provided a hiding place for Ms. Yanai’s family in Veroia, a town in northern Greece, during the German occupation of the country in World War II.

The meeting, which was set up by the center and by the Jewish Foundation for the Righteous, a charity that assists those who risked their lives to save Jews, might be the last of its kind, Stanlee J. Stahl, the executive vice president of the foundation, said by phone on Tuesday.

“I believe this will be the very last reunion,” Ms. Stahl told reporters on Sunday, noting that most survivors and the people who had helped them were either unable to travel or had died.

Ms. Dina, who was accompanied to Jerusalem by her daughter, was introduced to 40 descendants of the Jewish family she had helped to shelter in a bedroom in Veroia in the 1940s, according to a statement by the center and the foundation.

“Everyone is here, they are all waiting to meet you, to tell you that they thank you very much,” Ms. Yanai told Ms. Dina. “We are a large family now, we are all here,” she said.

One by one, members of the Jewish family, middle-aged offspring through to young children, embraced Ms. Dina, who now uses a wheelchair.

“We were hiding in her house — she saved all my family,” said Ms. Yanai, whose family name at the time was Mordechai. “Thanks to her, now she can see all our large family.”

The Mordechais — five children, including Ms. Yanai and Mr. Mor, and their parents, Mentes Mordechai and Miriam Mari — owned a fashion business, according to Yad Vashem.

In March 1943, when Jews in Thessaloniki, Greece’s second-largest city, which is close to Veroia, started being rounded up for deportation, the brother of a Greek maid for the Mordechai family helped them try to avoid detection.

But the maid’s brother soon found out that a roundup of Jews in Veroia was imminent. He hid the seven members of the family in his attic for almost a year, but, when the family developed health problems because of their cramped conditions, a new hiding place was needed, Yad Vashem said in a statement recounting the family’s story.

That is where the Giannopoulou sisters — the family name of Ms. Dina — came in. Before the war, Efthimia, Ms. Dina’s elder sister, had trained as a seamstress at Ms. Mordechai’s studio.

Because the sisters were orphans and very poor, Ms. Mordechai had not charged Efthimia for lessons, and Efthimia, who had visited the Mordechai family in their first shelter, wanted to repay the kindness.

So she, along with Bethleem, her 15-year-old sister, and Ms. Dina, then 14, decided to provide refuge for the family — lodging them all in one room and sharing their food rations.

“They had to share the food that they got for themselves,” said Mr. Mor, who is now 77 but who was a baby at the time, said.

“We were more than they were, you see,” he added.

While the family lived with the Giannopoulou sisters, Shmuel, one of the Mordechais’ sons, fell ill. He was taken to the hospital by one of the sisters, but he died, and soon after, the family was reported to the authorities, according to Yad Vashem.

The sisters helped them escape and provided them with clothes for hiding in the Vermio Mountains in northern Greece.

“You cannot imagine how dangerous it was for her, for all her family, to keep us all, our family, with them,” Ms. Yanai said of Ms. Dina.

Both the families that sheltered the Mordechais during the German occupation were recognized as Righteous Among the Nations by Yad Vashem and the State of Israel. More than 27,000 people have been recognized to date — 355 of whom were from Greece, according to Yad Vashem.

Ms. Dina, whose two sisters have since died, was recognized in 1994. She and other honorees are given financial support “as an expression of gratitude on behalf of the Jewish people,” the center and the foundation said in a statement.

About six million European Jews were killed by the Nazis and their associates during World War II.

“My mother and her sisters were young orphan girls, and they had no awareness of danger,” Margarita, Ms. Dina’s daughter, told the Athens-Macedonian News Agency, adding that the three of them had helped the Mordechai family with any means they had.

“What my mother says is that she has a clear conscience,” she added.

From the New York Times