SKOKIE — Patti Kenner was not a film producer until she met Ruth Gruber. 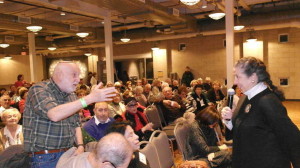 A journalist, a writer, an adventurer, a photographer, a woman well ahead of her time, Gruber has a way of inspiring people. When they hear her rich story — the places she has gone, the people she has seen and most important the history she has documented — they come away believing more of the world should know about her.

That was the case with Kenner who made a notable documentary about Gruber, “Ahead of Time: The Extraordinary Life of Ruth Gruber.” It was shown Sunday at the Illinois Holocaust Museum’s opening of a new exhibition about Gruber’s life.

“I didn’t know anything about making a movie,” Kenner said. “I just got tired of waiting for someone to make one about Ruth so I had to do it myself.”

Kenner convinced Gruber, who is now 102, to sign off on the film after the producer agreed to a promise that it would not be “fluff.”

Then again, how can any work about Gruber’s life be fluff? This was the youngest person in the world to earn her PhD (age 20), a fearless traveler to Alaska and arctic Russia to document how others lived, an important journalist who chronicled the plight of refugees looking for a home and much more.

Gruber documented the Exodus 1947 when European Jews traveled by ship to Palestine following the war but were attacked and prevented from staying.

She described the ship, after arriving to photograph it, as a “match box splintered by a nutcracker.”

Still good friends with Gruber, Kenner said the photojournalist is thrilled with the attention her work is receiving, but she is also modest. Kenner is planning a 103rd birthday celebration in September for her friend at the Museum of Jewish Heritage.

The Illinois Holocaust Museum is presenting “Ruth Gruber: Photojournalist,” a traveling exhibition that has never been seen before in the Midwest. The exhibition was originally displayed by the International Center of Photography in New York.

Adjunct Curator Maya Benton noted that Gruber was an acclaimed author (she wrote about 20 books), lecturer, “intrepid correspondent” for the New York Herald Tribune and served under U.S. Secretary of Interior Harold Ickes.

In 1944, during World War II, Gruber stewarded the ship Henry Gibbins on a secret U.S. government mission that brought nearly 1,000 Jewish refugees to upstate New York. It was the only attempt by the United States to shelter Jewish refugees during the war, she said.

But one reason Benton thought the exhibition was so important was because Gruber was not as well known for her photography as for some of these other accomplishments.

“Although she is known primarily as an author and journalist, photography was a component of her earliest reportage,” she said. “Her ground-breaking work as a photojournalist now spans five decades on four continents.”

The Illinois Holocaust Museum’s opening events Sunday finished off with a brief live Skype session between Gruber in her New York home and the hundreds in attendance in Skokie.

Asked the difference between being a journalist and an advocate, Gruber told the huge crowd she was not one over the other.

“I did everything with my heart so I was both a journalist and an advocate,” she said.