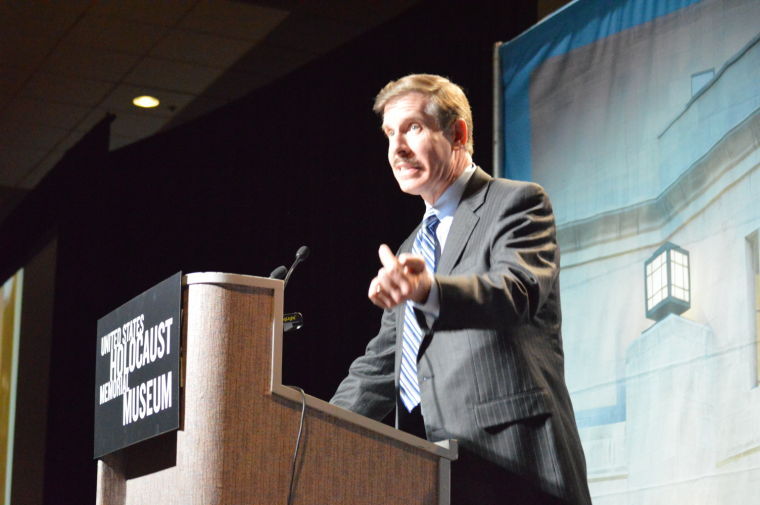 Eli Rosenbaum’s office at the U.S. Department of Justice has investigated and prosecuted more than 100 Nazi war criminals living in the United States over the past 20 years, including 12 from the Cleveland area.

Rosenbaum offered a behind-the-scenes look at three cases involving defendants who resided in Northeast Ohio – including the infamous John Demjanjuk – at the U.S. Holocaust Memorial Museum’s fourth annual Cleveland luncheon May 19 at Executive Caterers at Landerhaven in Mayfield Heights.

Rosenbaum, director of human rights enforcement strategy and policy for the justice department in Washington, D.C., was the keynote speaker at the luncheon, attended by nearly 500 people, including more than 50 Holocaust survivors.

Museum director Sara J. Bloomfield, who grew up in Shaker Heights, also spoke at the event, a fundraiser for the museum’s $540 million national campaign, “Never Again: What You Do Matters.”

Rosenbaum noted the Demjanjuk case was in litigation in the U.S. and abroad for more than three decades, starting in 1976. Demjanjuk was convicted in 2011 by a court in Munich as an accessory to the murders of at least 28,000 people at the Sobibor Death Camp in Poland. He was still appealing the guilty verdict when he died in Germany in 2012.

During World War II, Demjanjuk served as a guard at Sobibor and later in other Nazi camps as well where Jews were killed. He immigrated to the U.S. in 1952, concealing his Nazi service, and eventually settled in Seven Hills.

In his 36-minute PowerPoint presentation, Rosenbaum showed many photos of Demjanjuk over the years and slides of various documents, including one of Demjanjuk’s wartime SS card from the Trawniki SS camp.

“Literally for decades, Demjanjuk claimed that the card was a Soviet forgery, and he preposterously insisted, until the day he died, that he had never served as a Nazi guard at any camp,” Rosenbaum said.

Rosenbaum also chronicled the cases of George Lindert, who lived in Canfield, and Algimantas Dailide, who was found living in Brecksville. Lindert was an armed SS guard at the Mauthausen Concentration Camp in Austria, and Dailide directed “sting” operations while serving in the Lithuanian Security Police.

“These cases provide countless frustrations,” Rosenbaum said. “But in almost all of them, we have managed to achieve a measure of justice, however inadequate.

“Of particular importance are the court decisions we have won in these cases, which are published in the law books and online, and will stand forever as an important and irrefutable record of Nazi inhumanity.”

Rosenbaum noted the U.S. Holocaust Memorial Museum has been an important partner in his work, and he credited Bloomfield with making the museum’s resources available to his office. He also recognized Steven Dettelbach, U.S. attorney for the Northern District of Ohio who attended the luncheon, for his office’s work in helping to prosecute these Cleveland-area cases.

Bloomfield, a 1968 graduate of Shaker Heights High School, said the museum’s single-most important message is that the Holocaust was preventable.

“That’s why our campaign motto is ‘What You Do Matters,’” she said. “This campaign will enable us to protect the truth of the Holocaust and nurture leadership and citizenship for the future.

“We live in a time when humanity faces many questions about its future. We don’t know where our globalized, interconnected world is headed, but we certainly know where it’s been.”

Bloomfield, the museum’s director since 1999, recognized the Jack, Joseph and Morton Mandel Foundation for its $10 million gift to the museum in March. The museum’s Center for Advanced Holocaust Studies has been renamed in the Mandels’ honor, and the gift will ensure the Holocaust is a vital field of academic study in the U.S. and around the world, Bloomfield said.

After the program, Bloomfield, who has attended all four of the museum’s Cleveland luncheons, said it was “an extraordinary showing of the Cleveland community.”

“Every year it feels like the room is more full,” she said. “What’s so gratifying for me is not only to see the interest and dedication from the Cleveland community, but people from all different ages and backgrounds. That’s really wonderful.”

Holocaust survivor Rina Frankel of Shaker Heights and her daughter, Sharon Koltin of Chicago, expressed their support of the museum and its campaign. Sam Frankel, Rina’s husband, gave the motzi as other family members joined the Frankels on stage.