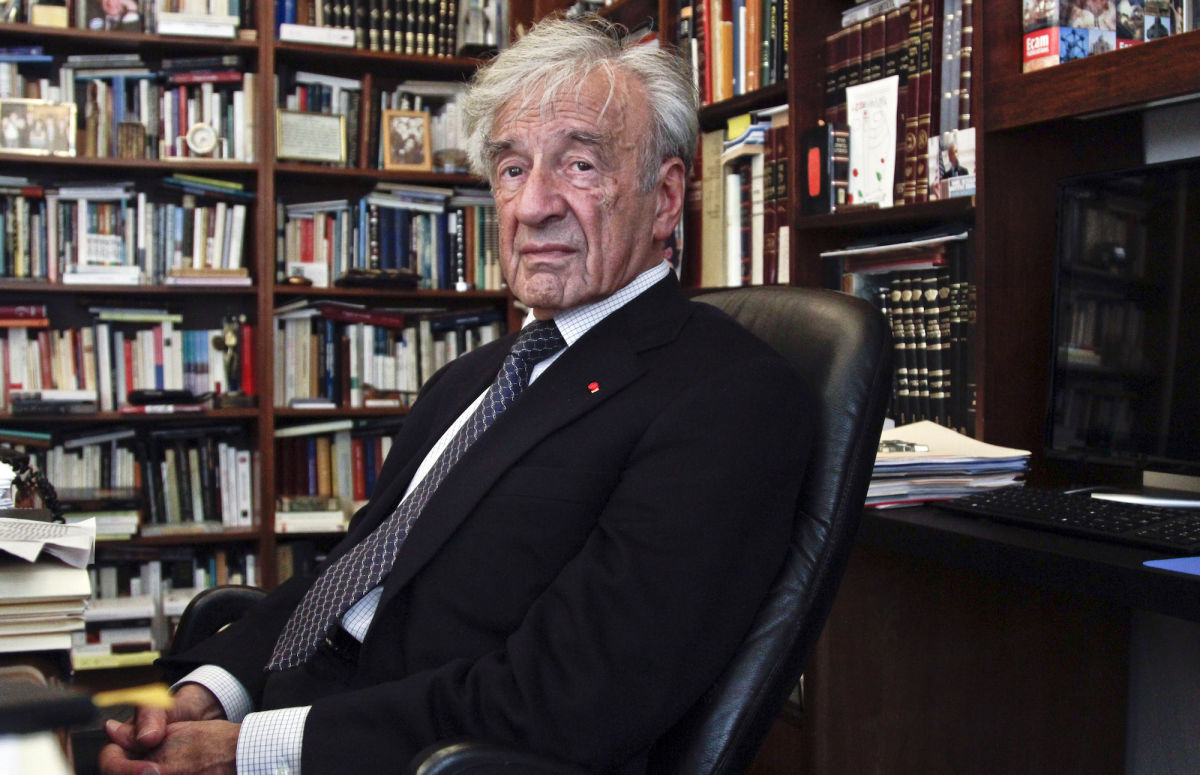 Elie Wiesel, who died on Saturday, wrote fifty-seven books, yet the obituaries and tributes refer to him more consistently as a witness than a writer. His moral authority, which he earned and sought, derived from his experience, not any literary virtuosity, though the spare, confessional prose of his most widely read books—his ability to remember suffered details, and describe their shock on a thinking, pious youth—gave his testimony popular momentum. “Night”—his early masterpiece from the fifties, which eventually sold in the millions—famously recounted how a child was hanged before all in Wiesel’s death camp, slowly suffocating, too light to break his own neck: “Behind me, I heard [a] man asking: ‘Where is God now?’ And I heard a voice within me answer him: ‘. . . Here He is—He is hanging here on this gallows.’ “ In “One Generation After,” a memoir published in 1970, he writes of the former head of a yeshiva in Galicia, who bonded with him in Auschwitz. The teacher—who seemed to know the entire Talmud by heart—urged him to “preserve his soul” by studying with him:

“Isn’t the soul supposed to be immortal?” I asked innocently.

We were digging. He stopped, as if unwilling to hear his own words, and replied: “You will learn that this is neither the place nor the time to speak of immortality.” . . . In the end, resolution gave way and followed the body: weakened one like the other, one by the other.

A miserable crust of moldy bread came to contain more truth, more eternity than all the pages of all the books put together.

The first time I saw him speak, at a packed Montreal synagogue in the late sixties, his prestige was already growing. “The binding of Isaac was not God’s test of man,” I recall Wiesel telling us in the synagogue, stroking back his wispy hair, erudite, quoting Rabbi Nachman, speaking elegant, softly cadenced English in a Transylvanian accent—which only added to his charisma. “The binding of Isaac was man’s test of God.” In the case of Abraham, God passed, barely. Wiesel did not need to add that his failures would mount. Our speaker, in contrast, had written for Israeli newspapers, which seemed a novel triumph of Abrahamic justice and power.

Most of our families were immigrants from Eastern Europe and his past was ours, only worse, and more perfectly articulated. “Night” had not yet become iconic, but it was passed around among my hip Jewish friends at McGill with unusual sincerity. The young hero’s anguish—also his scorn, cultural love, and filial piety—fit our Zionist mood, opening us to a new kind of Judaism, more evangelical than observant. Auschwitz had become a kind of Calvary for us, and Wiesel became the author of our passion play: unspeakable cruelty, common indifference, God’s forsaking, the sacrifice of his innocent chosen. Israel, which had broken the siege of 1967, seemed the resurrection.

François Mauriac, the French-Catholic writer who had championed “Night,” had provided us the words. In his introduction to “Night,” the Zionist passion emerges as a counterpart to his church’s, an unusual moment of theological symmetry. “The child who tells us this story here was one of God’s elect”; his recounted horrors were worst of all for “those of us who have faith: the death of God in the soul of a child who suddenly discovers absolute evil.” That phrase, “absolute evil,” would become an important constituent of Wiesel’s rhetoric over the years; the Bad News gestured toward a kind of metaphysical innocence. The critic Naomi Seidman shows that, at Mauriac’s urging, Wiesel pared down his original eight hundred Yiddish pages to about a hundred and twenty “mythopoetic” French ones, excising calls for (and descriptions of) Jewish acts of revenge. Mauriac writes that he did not dare to speak to the child of “that other Jew, his brother who may have resembled him—the Crucified, whose cross had conquered the world.” But “Zion,” Mauriac wrote, had “risen up from the crematoria and charnel houses. The Jewish nation has been resurrected from among its thousands of dead.”

Wiesel’s double message—never again, and never again to Jews—seemed a single message in the years following the Israeli War of Independence, but there always was the potential for inconsistency. The tension haunted Wiesel’s next book, “Dawn,” published in 1961, and set in Mandatory Palestine, in which the protagonist, a young Holocaust survivor and student of philosophy, becomes a member of the anti-British underground, modelled on the Irgun. He finds himself struggling with an order to commit an act that can only be called terrorism: the cold-blooded murder of a random British soldier, captured to try to preëmpt the execution of a comrade. The arguments for mercy, the quality denied to him in the concentration camp, clash with the arguments for ruthlessness in pursuit of the (implicitly just) national cause. In 1965, edging toward the redemptive power of Jewish nationalism, Wiesel wrote “The Jews of Silence,” a study of Soviet Jews living with enduring bigotry and persecution. “Most of them come [to synagogue] not to pray,” Wiesel writes, “but out of a desire to identify with the Jewish people—about whom they know next to nothing.” Then came the 1967 war. Wiesel, like many of us, got caught up in it: in 1970, he published “A Beggar in Jerusalem,” his homage to the city, its mythic power, its tortured history, and, subtly, its unification under Jewish rule.

But it was “Night” ’s growing status, not any new work, that brought Wiesel to prominence in America (he never achieved a comparable fame in Israel). Inspired by Wiesel and other memoirists, such as Primo Levi, increasingly American Jews saw the Holocaust as a binding tie. About three-quarters of American Jews, a Pew study shows, now think “remembering the Holocaust” is essential to their identity, twice as many as focus on religious duties. Non-Jews saw the book as a reason to trust Wiesel’s voice. And he raised it, as the New York Times obituary recalls, with mounting regularity. He condemned the burnings of black churches in the United States, and spoke out against apartheid in South Africa and on behalf of the the tortured political prisoners of Latin America. He denounced the massacres in Bosnia in the mid-nineteen-nineties, and reportedly helped to persuade Bill Clinton to intervene. He condemned the slaughters in Cambodia, Rwanda, and the Darfur region of Sudan. “I swore never to be silent whenever, wherever human beings endure suffering and humiliation,” he said, in accepting the Nobel Peace Prize, in the fall of 1986. “We must take sides. Neutrality helps the oppressor, never the victim. Silence encourages the tormentor, never the tormented.” I recall Wiesel speaking on national television in the U.S., after a program on the dangers of nuclear weapons, declaring that, in the face of extinction, all the world has become “Jewish.”

Remarkably, however, there is not a word in the Times obituary about the occupation of the Palestinian territories. That is not an oversight. To the dismay of Israeli peace activists, and their supporters abroad, who’ve seen Wiesel’s unique international stature grow over two generations—and sought his support—he rarely if ever publicly raised his voice against any Israeli actions: not the bombings of Beirut in 1982; not the subsequent massacre, by Lebanese Phalangists, at Sabra and Shatila, within the perimeter held by the Israeli Army; not the disgraceful behavior of settlers in Hebron; not the encirclement by Israeli ministries of Jerusalem’s Silwan neighborhood; not the obstacles placed before international efforts to restore potable water and electricity to the residents of Gaza. Many of us who admired him in our youth became increasingly impatient with his inability to see the occupation for what it was. Primo Levi, also a survivor of Auschwitz, condemned Menachem Begin’s war in Lebanon as “success achieved with an unprincipled use of arms.” For Levi, evil was too explicably human to be absolute: “I feel indignant toward those who hastily compare the Israeli generals to Nazi generals, and yet I have to admit that Begin draws such judgments on himself . . . I fear that this undertaking [in Lebanon], with its frightening cost in lives, will inflict on Judaism a degradation difficult to cure . . . I sense in myself, not without surprise, a profound emotional bond to Israel, but not to this Israel.”

In his Nobel speech, Wiesel spoke majestically of the need to ameliorate suffering, which “applies also to Palestinians, to whose plight I am sensitive, but whose methods I deplore when they lead to violence. . . . They are frustrated; that is understandable.” Terror, however, disqualified their national claims (the Peace Prize, after all, was for the author of “Night,” not “Dawn”). Then he added, as if Israel were itself not then led by the former Jewish terrorist and annexationist, Likud’s Yitzhak Shamir, “Israel will coöperate; I am sure of that. I trust Israel for I have faith in the Jewish people. Let Israel be given a chance, let hatred and danger be removed from their horizons, and there will be peace in and around the Holy Land.” Wiesel’s one show of magnanimity to the peace camp came in June of 2009, after President Obama delivered his Cairo Address. Wiesel joined Obama and Chancellor Angela Merkel on a symbolic visit to Buchenwald, as if to endorse the Administration’s claim that reaching a new dialogue with the Muslim world would not be purchased at the cost of Israel’s legitimacy. But, as the Netanyahu government settled in, Wiesel sided with Netanyahu’s most vociferous backers in distancing himself from Obama, opposing virtually all diplomatic initiatives toward Iran and the Palestinians.

In 2010, as the Obama Administration tried to revive negotiations between Israelis and Palestinians over, among other things, Jerusalem, Wiesel took out a full-page ad in the Times. “For me, the Jew that I am, Jerusalem is above politics,” he wrote. “It is mentioned more than six hundred times in Scripture—and not a single time in the Koran . . . the first song I heard was my mother’s lullaby about and for Jerusalem.” In what seemed a desperate play for his old moral authority, he wrote that Jews, Christians, and Muslims are able to build their homes anywhere in Jerusalem and only under Israeli sovereignty. “The anguish over Jerusalem is not about real estate but about memory.” Curiously, Wiesel’s appeal to “memory” had now abandoned history altogether. Ben Gurion once quipped, “There is no God, and He gave us the land of Israel.” Wiesel seemed now to be saying, God may not have survived Auschwitz, but he had already promised us Jerusalem.

“Mr. Wiesel prefer[s] mythical references . . . and eschatology to the real people who want to live together in peace,” Sidra DeKoven Ezrahi, a Hebrew University scholar of Holocaust literature, also my wife, wrote in protest. (Sidra had previously worked with Wiesel on the creation of the American Holocaust Museum.)

For Wiesel, loving Jerusalem superseded loving in Jerusalem. “After representing so eloquently the victims of history’s injustices in Nazi and then Soviet Europe, Mr. Wiesel would surely, we assumed, turn to the injustices perpetrated by his own people, and cry out against the tragic occupation and dispossession of the Palestinian people,” Sidra wrote. Imagine if, the Jew that he was, he had.