This has never been about the money, said Norman Trysk-Frajman. It’s about his fading memories, and the principle of it all.

All that Trysk-Frajman has left of his grandparents who he affectionately called Bubbe and Zaide are two worn and yellowed property deeds.

The couple owned two apartment buildings in Warsaw before the German occupation, and the towers were five or six stories; Trysk-Frajman had lived there, too.

He was just a small boy, and so he doesn’t remember how many units there were, but knows they were packed with Jewish and non-Jewish tenants. A second apartment project on another street was owned by his grandfather and his brother.

Today, Trysk-Frajman, 86, of Boynton Beach, holds both the property deeds. But the odds he’ll ever be able to seek reimbursement by the government have now dwindled.

Poland’s constitutional court has upheld a 2015 law that limits the rights of people whose property in Warsaw was seized during or after World War II, and their descendants, to apply for restitution, The New York Times reported.
Deed 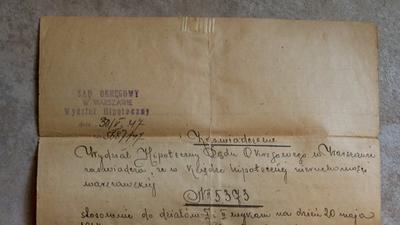 Trysk-Frajman said he never filed a restitution claim because he did not know he had the right to do so.

The New York-based Conference on Jewish Material Claims Against Germany — which over the decades has negotiated property restitution in Germany, in-home health services for survivors and pension programs — blasted the decision, and called on the European Union to “intensify pressure” on Poland to make good on its obligation. The agency has been able to negotiate $70 billion in payments to survivors from the German government over the decades.

“This decision shows that Poland still has a long way to go to achieve justice by allowing rightful owners to recover their property that was stolen in the Holocaust era and/or nationalized during the communist regime,” said Claims Conference President Julius Berman in a statement to the Sun Sentinel. “The country should not be allowed to enjoy all the benefits of EU membership without the obligation to enable the return of property seized from its murdered Jewish community.”

Before World War II, 350,000 Jews lived in Warsaw, making up about 30 percent of the city’s population. Ninety percent of Poland’s prewar Jewish population of approximately 3.3 million people was killed during the Holocaust. The World Jewish Restitution Organization estimates that about 35,000 Polish Holocaust survivors living in the U.S., although not all owned property.

The Claims Conference is a member of the WJRO which said in a statement that this law “could leave rightful former owners empty handed after waiting over 60 years for Poland to resolve their valid claims.”

According to The New York Times, under Polish law, former owners can bring private restitution claims in Polish courts; some Jewish claimants have been awarded compensation. But the process is difficult, time-consuming and expensive, and few claims have been successful.

The conservative Law and Justice Party, which swept to power in October, has taken a hard-line view, declaring that restitution legislation is not necessary because the past is the past, The New York Times reported.

“Survivors are running out of time for Poland to meet its obligations to return property,” Jehuda Evron, president of the Holocaust Restitution Committee, a New York-based group of Polish survivors, said in a statement. “We are losing survivors by the day, and we must do everything we can to ensure they spend the last few years of their life in dignity.”

Trysk-Frajman said he had a beautiful childhood with doting grandparents and privileges including a bicycle, indoor plumbing and a family dog. He attended private Jewish school. “By our standards, it was a luxurious way of growing up,” he said.

It ended with a crash after Hitler rose to power, his family’s property seized, and then his family murdered. His grandparents were killed in the Holocaust, along with his mother and little sister. Even his paternal grandparents, who were trapped when they visited their grandchildren from then-Palestine, who were killed.

“Sometimes I cannot even grasp that this happened,” he said.

Trysk-Frajman survived the notorious concentration camps of Majdanek and Buchenwald before liberation when he was a teenager.