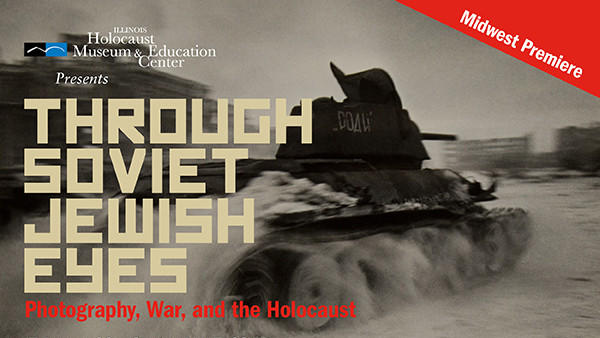 The Illinois Holocaust Museum & Education Center is pleased to announce the Midwest premiere of Through Soviet Jewish Eyes: Photography, War, and the Holocaust, a photographic exhibition that reveals a rarely seen perspective of World War II through the lens of the most important Soviet Jewish photojournalists. In order to reach Chicagoland’s significant Russian speaking community, the Illinois Holocaust Museum will be the first museum in the world to present the entire exhibition with Russian translation.

Based on the award-winning book “Through Soviet Jewish Eyes” written by curator David Shneer, the exhibition presents more than 60 photographs that span the Nazi-Soviet war, from June 22, 1941 until Victory Day on May 9, 1945. The photographs range from large-scale, dramatic prints in which the fine line between art and photojournalism is blurred, to intimate-scaled vintage prints that compel a close reading of the images.

“Through Soviet Jewish Eyes shows us that by looking through the camera lenses of liberator-photographers in the Soviet Union, we see another chilling image of the Holocaust-one made up of prosaic, intimate landscapes and emptiness that genocide leaves behind,” said Shneer.

“This exhibition which presents the Soviet Jewish experience of the Holocaust is a unique opportunity not only for our large Russian speaking Jewish population to explore their dual identity, but for people of all backgrounds to recognize the efforts and extend gratitude to those who fought so valiantly,” said Michael Polsky, presenting sponsor of the exhibition and Invenergy CEO.

World War II was one of the most documented global conflicts, yet western audiences know little about the Soviet Jewish photojournalists who captured some of the most riveting images of the war in the former Soviet Union. These wartime photographers were the first to witness Nazi atrocities from the liberator’s perspective, three years before Americans arrived at concentration camps like Buchenwald and Dachau.

“We feel honored to be the first museum in the Midwest to present the works of photographers including Evgenii Khaldei, Georgii Zelma, and Dmitrii Baltermants,” said Arielle Weininger, Museum Chief Curator of Collections and Exhibitions. “These brave liberators, charged by the Stalinist state to tell the visual story of the unprecedented horror we now call the Holocaust, merged documentary photography with avant-garde sensibilities to create works that had a profound influence on 20th century art and beyond.”

The exhibition opening event and book signing will take place at the Illinois Holocaust Museum on February 22 at 2:00 pm and will feature curator and author David Shneer, Director of the Program in Jewish Studies at the University of Colorado, Boulder, with special remarks by Michael Polsky, President and CEO of Invenergy and presenting sponsor of the exhibition. The event is free with Museum admission, and reservations are required at tsje.eventbrite.com. In honor of Holocaust survivors and World War II veterans, the Museum is pleased to offer them free admission to visit the exhibition. To view other exhibition related programming, visit http://www.ilholocaustmuseum.org/pages/exhibitions/special-exhibitions.

Presenting Sponsor: The Michael Polsky Family.
Supporting Sponsors: David C. & Sarajean Ruttenberg Arts Foundation. The Golder Family Foundation is lead sponsor for all Illinois Holocaust Museum exhibitions. This program is partially supported by and grant from the Illinois Arts Council Agency.
Community Partners: Chicago Connect; Holocaust Community Services, a collaborative effort of the Jewish Federation of Metropolitan Chicago, Jewish Child and Family Services, and CJE SeniorLife; the Russian Jewish Division of the Jewish United Fund; and HIAS Chicago.
Media Sponsors: Reklama Media, Chicago Ethnic Media, and Svet Russian Media Group.
Through Soviet Jewish Eyes: Photography, War, and the Holocaust is curated by David Shneer and Lisa Tamiris Becker, and is organized by the CU Art Museum, University of Colorado Boulder.
The Illinois Holocaust Museum & Education Center is dedicated to preserving the legacy of the Holocaust by honoring the memories of those who were lost and by teaching universal lessons that combat hatred, prejudice and indifference. The Museum fulfills its mission through the exhibition, preservation and interpretation of its collections and through education programs and initiatives that foster the promotion of human rights and the elimination of genocide. The Museum is open Monday through Friday from 10:00 a.m. until 5:00 p.m.; Thursday evenings until 8:00 p.m.; and Saturdays and Sundays from 10:00 a.m. until 5:00 p.m. Learn more at www.illinoisholocaustmuseum.org

You are here: Home » Midwest Premiere – Through Soviet Jewish Eyes: Photography, War, and the Holocaust