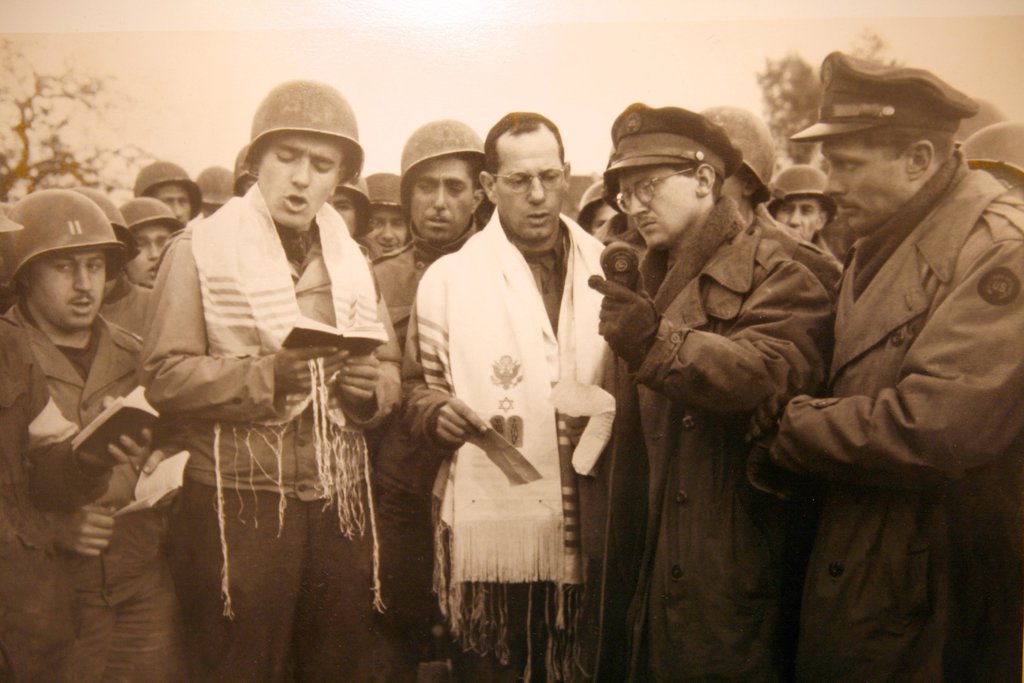 Max Fuchs was a rifleman in the First Infantry Division when it came ashore at Omaha Beach, the bloodiest sector of the D-Day invasion of Normandy, on the morning of June 6, 1944.

Four months later, he fought with the division in the battle for Aachen, which became the first German city to fall to the Allies in World War II.

And on Oct. 29 of that year, Private Fuchs — who had attended a yeshiva and sang cantorial music in a choir while growing up on Manhattan’s Lower East Side — sang the traditional Sabbath hymns at a hugely emotional open-air service on the Aachen battlefield before some 50 fellow Jewish soldiers.

The site was near the city’s destroyed synagogue, and during the service the crack of German artillery reverberated.

When Mr. Fuchs died on Tuesday at his home in Manhattan at 96, he was remembered for his voice, one that resounded at the first Jewish service to be broadcast from German soil since the rise of Hitler. It was heard the next day on the NBC radio network throughout America and rebroadcast for those who missed it. Later, the service was broadcast in Germany.

“The emotion was tremendous,” Mr. Fuchs recalled in an interview for the American Jewish Committee in 2009. “The soldiers had heard of all the atrocities. Most of them had families that perished in the Holocaust. We had so many of my family.”

Mordechai Fuchs was born on Feb. 10, 1922, in the Polish city of Rzeszow, a son of Shaya and Tisha (Eder) Fuchs. His father was a shopkeeper and furrier.

The family arrived in New York when Max, as he became known, was 12. As he grew up, developing a love for cantorial music, he considered going on the Yiddish stage one day. Then came the war.

Mr. Fuchs was drafted into the Army, became an infantryman, was shipped to Europe and incurred shrapnel wounds at Normandy.

After the war, he studied cantorial music under the G.I. Bill and was the cantor at the Bayside Jewish Center in Queens for 39 years while working as a diamond cutter in Midtown Manhattan’s jewelry district.

Mr. Fuchs had nightmares about the war for about 20 years afterward and was reluctant to speak about his combat experiences with his family.

He did hang a photograph in the family’s living room in Bayside showing a G.I. singing at a service, a prayer shawl draped on his uniform, while a radio reporter held a microphone in front of him.

Mr. Fuchs’s daughter Ester told The New York Times in 2009 that her father would say little about the picture, other than acknowledging that it was him in the photo and saying that the service had been broadcast.

When she read a 2000 newspaper interview with James Cassidy, a former combat correspondent for NBC, telling of a Jewish service he had covered, she asked her father if this was the image in their home. He said it was.

The American Jewish Committee had made the service possible, locating Sidney Lefkowitz, an Army corps chaplain, to preside. The division had no cantor at the time, so Private Fuchs volunteered to fill the role.

“Since I was the only one who could do it, I tried my best,” he told The Times.

Charlotte Bonelli, the chief archivist for the committee, while researching the history of its radio division, found the recording of the service at the Library of Congress and commissioned a short documentary on it. It was presented at the American Jewish Committee’s annual meeting in 2005. She posted a film of the service on YouTube.

Mr. Fuchs had never given his name to the NBC correspondent. But another of his daughters, Hana, arranged for him to be cited online. Over the years, the recording has been seen and heard by tens of thousands.

In December 2007, Mr. Fuchs sang as part of the rededication of the 19th-century Eldridge Street Synagogue on the Lower East Side, which had fallen into disrepair and was renovated as a museum, an event space and a functioning synagogue once more. His wife, Naomi Fuchs, who attended the rededication with him, had worshiped there with her family as a child, when she was known as Naomi Groob.

In April 2018, Mr. Fuchs was interviewed for the PBS documentary “GI Jews: Jewish Americans in World War II,” which was presented in honor of Holocaust Remembrance Day.

Mr. Fuchs worked in the diamond district into his 90s, occasioning The New Yorker to interview him in 2014.

“You can take a diamond that’s, let’s say, a broken diamond, and you bring it back into shape. … It’s a masterpiece — like Picasso,” he said.

Mr. Fuchs’s death was announced by his family. He is survived by his wife and his daughters; his sons, Yehudah, Aaron and Dov; a sister, Regina Wengrow; and five grandchildren. He lived with his wife on the Upper West Side.

After the 1944 Army service, Roman Catholic and Protestant chaplains joined with Rabbi Lefkowitz, the Jewish chaplain, in speaking on the recording.

“How sweet upon the mountain are the feet of the messenger of good tidings,” Rabbi Lefkowitz can be heard saying. “The light of religious freedom has pierced through the darkness of Nazi persecution.”