Margot Heuman, Who Bore Witness to the Holocaust as a Gay Woman, Dies at 94 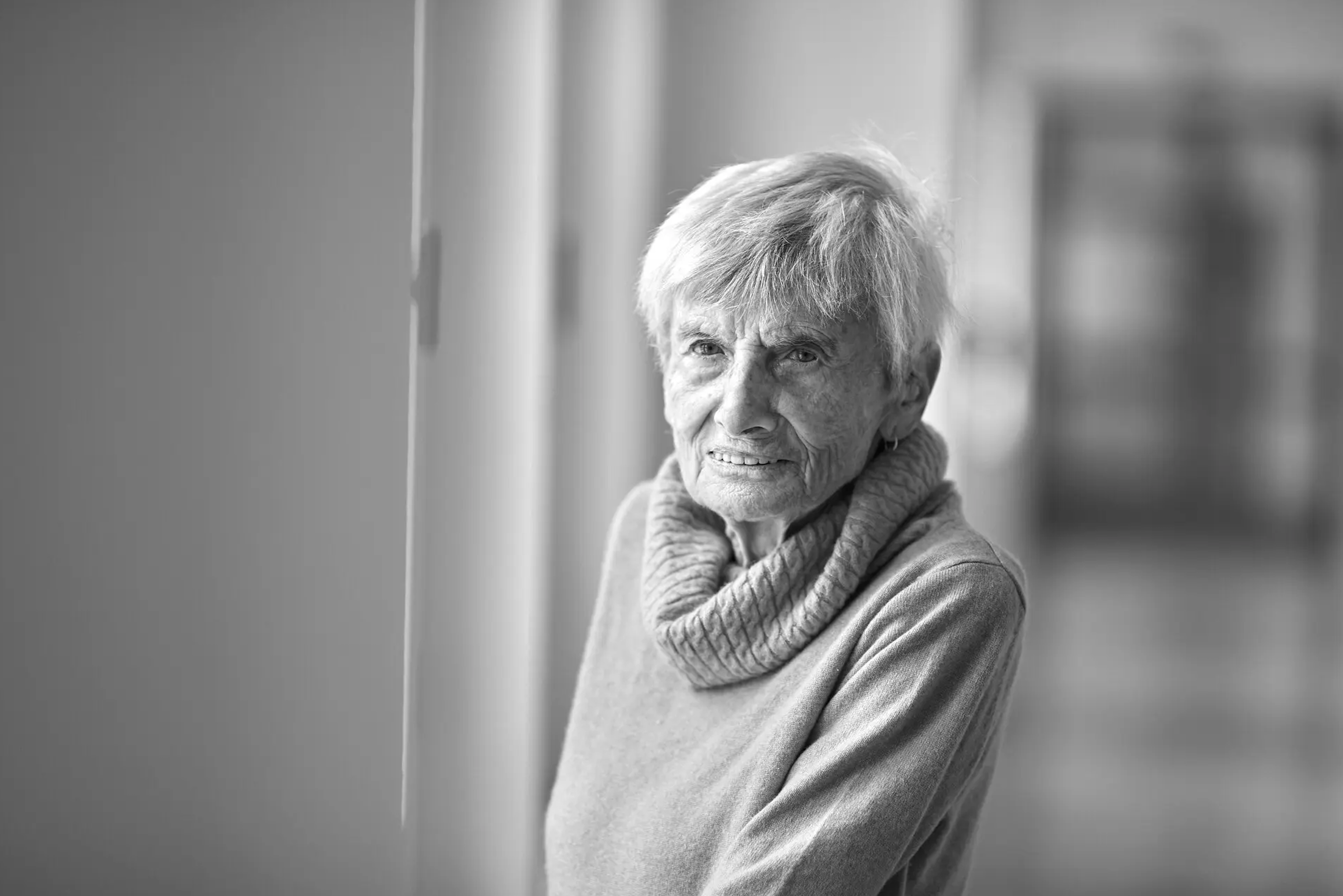 She was a rare survivor who spoke — in recent years — of her same-sex relationship in the concentration camps, and how it sustained her.

Margot Heuman was 14 when she and her family were deported to Theresienstadt, a Jewish “transit” ghetto in Czechoslovakia that was a way station — a cruel intermezzo — for those who would be sent to the death camps. It was 1943, and the Heuman family had already been severed from the comfortable life they had been living in Lippstadt, Germany.

Yet Margot was happy there. The proscriptions that followed Kristallnacht curtailed Jewish life at home, but Theresienstadt had culture, school and community. Margot saw her first opera there, “La Bohème,” and she fell in love, with a Viennese girl named Dita Neumann. When in 1944 her father was caught stealing food, he and the family were sent to Auschwitz. Dita and her family were sent a month later.

Ms. Heuman’s father, Karl, would die there. Her mother, Johanna, and her younger sister, Lore, would perish later in the camp at Stutthof. But Margot and Dita survived, chosen inexplicably for transport to various camps and eventually ending up in a labor camp in Hamburg.

Ms. Heuman said later that it was their relationship that kept them alive. They shared food and a bunk bed, and they told stories of what they would do once they were free. Not if, but when.

“Because of my caring for another human being,” Ms. Heuman said in 1992, in an oral history recorded by the United States Holocaust Memorial Museum, “we somehow never lost our dignity and remained people.”

Ms. Heuman, who went on to have a career in advertising in New York City, died on May 11 at a hospital in Green Valley, Ariz. She was 94.

Her son, Dan, announced the death.

Ms. Heuman was the rare survivor who eventually “bore testimony” to her same-sex experience in the concentration camps, as Anna Hajkova, an associate professor at the University of Warwick in Coventry, England, and a scholar of queer history and the Holocaust, put it. Though the oral history of the Holocaust is vast, there are hardly any tales of queer survivors. Indeed, though Ms. Heuman often told the story of her friendship with Dita, it was not until she met with Dr. Hajkova, a queer woman, that she cast it as a romance. Of the 52,000 interviews with Jewish survivors in the Shoah Foundation’s archives, Hajkova said, “next to none of them speak about same-sex desire.”

Ms. Heuman and Dr. Hajkova met at Ms. Heuman’s home in 2018; a cousin of Ms. Heuman’s knew of Dr. Hajkova’s research and connected the two. Ms. Heuman’s story is one of four that will be included in her forthcoming book “Quartet: Sexuality, Queer Desire, and the Holocaust.”

Her story has already been performed as a one-act play. Dr. Hajkova collaborated with Erika Hughes, a theater director who focuses on the Holocaust at the University of Portsmouth in Hampshire, England, to create “The Amazing Life of Margot Heuman,” which was first shown online at the Brighton Fringe Festival in June of 2021. This year it is scheduled to be performed at the University of Hamburg and the Jewish Museum in Vienna, among other venues.

Sexuality was just as fluid and complex in the camps as in the outside world. Some female prisoners, like Ms. Heuman, knew they were attracted to women before their deportation; others discovered their sexuality once they were imprisoned. Others bartered with their female guards sex for food or safety, or sought intimacy with fellow prisoners though neither partner identified as gay.

Nonetheless, Dr. Hajkova said, homophobia was rampant in the camps, despite the progressive culture of Weimar Germany and the nascent prewar movement across Eastern Europe to decriminalize homosexuality, which had been cut short by the rise of the Nazis.

But Ms. Heuman and Dita, as Ms. Heuman recalled, were called out only once, when a group of fellow prisoners, seeing them cuddle, sneered, “That’s not natural!” Dita’s aunt, who was interned with them, brushed the slur away. “They’re only children,” she said.

Margot Cecile Heumann was born on Feb. 17, 1928, in Hellenthal, Germany. (She dropped the final “n” from her name, pronounced HOY-man, when she became an American citizen in 1952.) Her father owned a dry goods store; her mother, Johanna (Falkenstein) Heumann, was a homemaker.

After Bergen-Belsen, the site of Dita and Margot’s final internment, was liberated in April 1945, Dita was sent to England and the Swedish Red Cross brought Margot to Stockholm, where she was cared for by a schoolteacher who had volunteered to take her in. Margot weighed only 76 pounds and was nearly dead from starvation and typhus; the schoolteacher sent her to summer camp and private schools and, Ms. Heuman said, nurtured her like a mother. She loved Stockholm and her new life. But in 1947, at the urging of her mother’s brother, who wanted to gather what remained of his family, she moved to New York City.

In New York, Ms. Heuman worked in a button factory, as a nanny and as a waitress. She met Lu Burke, who would go on to be a copy editor at The New Yorker, and they lived together as a couple in the West Village. Ms. Burke improved Ms. Heuman’s English by reading the dictionary with her. (At The New Yorker, Ms. Burke was a notorious and feared language martinet, nicknamed Sarge by the production staff.)

Ms. Heuman attended City College, and in the early 1950s took a job as what was known at the time as a “girl Friday” at Doyle Dane Bernbach, then a fledgling advertising agency. She worked there until her retirement at 60, eventually overseeing budgets and work flow as a traffic director for the company. She married Charles Mendelson, an accountant, in 1952; they had two children and divorced in 1976.

“I felt I owed it to my parents to have children,” Ms. Heuman said in a 2019 talk. But she also owed it to herself to leave the marriage when it went south and her children had left the house. “Life is too short,” she said.

A few years ago, Ms. Heuman decided to come out formally to her son and her daughter-in-law, Lyndsey Layton, deputy editor of The New York Times climate desk; they were nonplused, having never thought of her as closeted. Nor did her daughter, Jill Mendelson. “I always knew,” Ms. Mendelson said. “It was never a discussion.” When she phoned Ms. Layton and announced that she was gay, Ms. Layton recalled, she responded, “Yes, yes you are, Margot!”

Ms. Heuman handled her survivor’s legacy a bit the way she handled her sexuality. It wasn’t hidden, but she didn’t declare herself. She waited until her children asked her questions about it, and she answered them in what she found to be an age-appropriate way. When her daughter was very young, she said her Auschwitz tattoo was her phone number, put there so she wouldn’t forget.

“I don’t remember that,” Ms. Mendelson said in an interview, “but I always knew she was a war survivor.”

Yet when Ms. Heuman spoke of her experience, she told of small pleasures: the beauty of the sunrise over the river Elbe, when she and Dita were in a labor camp in Hamburg, working at an asbestos factory and digging trenches for the German Army; how a German soldier used to share his lunch with her, because she reminded him of his daughter.

In addition to her son and daughter, Ms. Heuman is survived by five grandchildren and one great-grandson.

She and Dita remained friends throughout their lives. Dita became a nurse and married a doctor in Canada. When she died of cancer in 2011, Ms. Heuman was at her side.

Penelope Green is an obituaries reporter for The New York Times. She has been a reporter for the Style and Home sections, editor of Styles of The Times, an early iteration of Style, and a story editor at The New York Times Magazine. She lives in Manhattan. @greenpnyt • FacebookA version of this article appears in print on May 28, 2022, Section A, Page 19 of the New York edition with the headline: Margot Heuman, 94, Who Bore Witness to the Holocaust as a Gay Woman, Dies.