Why life is beautiful, according to this 92-year-old Holocaust survivor 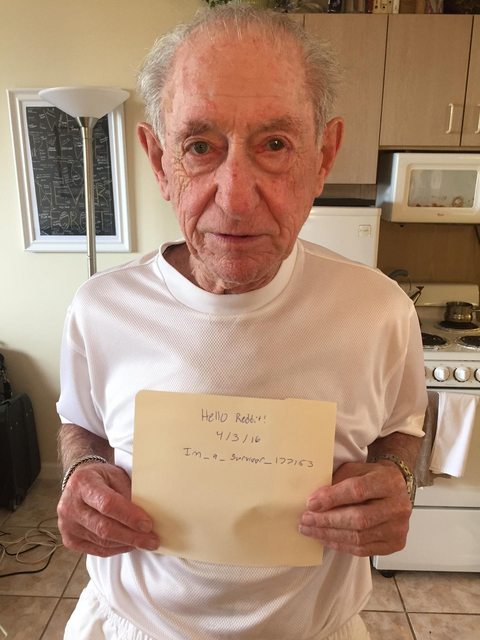 While at the Nazi Blechhammer Concentration Camp in German-occupied Poland, he wasn’t Henry Flescher. His name was 177153.

That was the number tattooed on Flescher’s forearm by the Nazis during the Holocaust. And that number remains on his arm, as “a testament to the past,” Flescher wrote. “It shows I survived. And I’m here, and loving life!”

Flescher, 92, explained why he has kept his tattoo for so many years and answered questions about his outlook on life during a Reddit AMA this week.

While many asked Flescher to recount specifics of his story — he was sent to at least six concentration camps, according to the U.S. Holocaust Museum’s survivors and victims database — the Florida resident was also peppered with philosophical questions about how such a harrowing experience has affected his approach to living.

“How were you able to be so strong to survive such a hellish experience,” one person asked, “when so many of us lived privileged easy lives and still come apart at the seams?”

Here’s how Flescher responded: “Most people are never happy and complain too much. It’s too hot out, it’s too cold out. Life is beautiful. No need to complain so much. I think my outlook on life is different than most people, before and after the Holocaust. I’ve always had a love for life.”

How did he manage to survive such horror?

“Every day you think of living,” he wrote. “We are born to die, but I appreciate life. We live day by day, and I always say: Yesterday is history, today’s reality, and tomorrow’s a dream.”

Flescher was born March 14, 1924, in Vienna. When the war broke out, he moved with his family to Brussels, where he eventually received papers instructing him to go to a labor camp. His family tried to smuggle him into Spain in 1942. But he was captured on the way while buying grapes at a market in Lyon, France.

He was sent first to a transit camp in France and from there, transported in a cattle car. Six days later, guards selected 300 men; the rest went off to Auschwitz to be killed, he wrote.

[Anne Frank and her family were also denied entry as refugees to the U.S.]

Those 300 men went to work at a shoe factory in Ohrdruf. From there, he went to Peiskretscham to build bridges, and months later, to Blechhammer.

“Blechhammer was hell,” he wrote. “Punishments were a daily routine and my front teeth were knocked out here.”

Two years later, he was forced on a death march to Gross-Rosen, where he came down with dysentery and “almost gave up,” he wrote.

Flescher weighed just 70 pounds on April 11, 1945, the day he was liberated, a date he celebrates as one of his birthdays.

Many of the details of his horrifying experience — seeing a friend hanged for using a telephone wire as a belt, being forced to stand for hours for fear of being killed — emerged during Flescher’s question-and-answer session.

“I cannot forgive,” he wrote on Reddit. “But I was never consumed by hate. Hate doesn’t improve anything.”

Flescher calls himself lucky. He dances, travels and loves his life.

[The one thing everyone needs for happier, healthier lives]

He currently lives in Aventura, Fla., and he volunteers at the Miami Holocaust Museum, where he often shares his story with visitors.

“I love sharing my story, but don’t even know what Reddit is,” Flescher wrote during the session. “My grandson always wants me to share my story to as many people as possible so he suggested this.”

It’s important to “tell the story as it is,” Flescher wrote on Reddit. “You cannot shy away from history and its brutality.”

Although living in the midst of such brutality sounds incredibly daunting, Flescher explained, “I lived for tomorrow. I was always positive.”

“They told us if Germany won the war, you’d work until you die, and if they lost the war they’d kill everyone. We are born to die, but I always kept my mind positive,” he wrote. “I’m lucky I made it out, but I lost many family members and friends during this time.”

Some survivors of such a traumatic experience retain certain habits, such as eating quickly or sleeping on the floor.

“The only habit that stayed with me is my desire to live,” he wrote.

And what does Flescher enjoy most now that people take for granted? “Life is beautiful,” he wrote. “I love seeing my family.”

[This post has been updated to clarify that Blechhamer was in German-occupied Poland.]