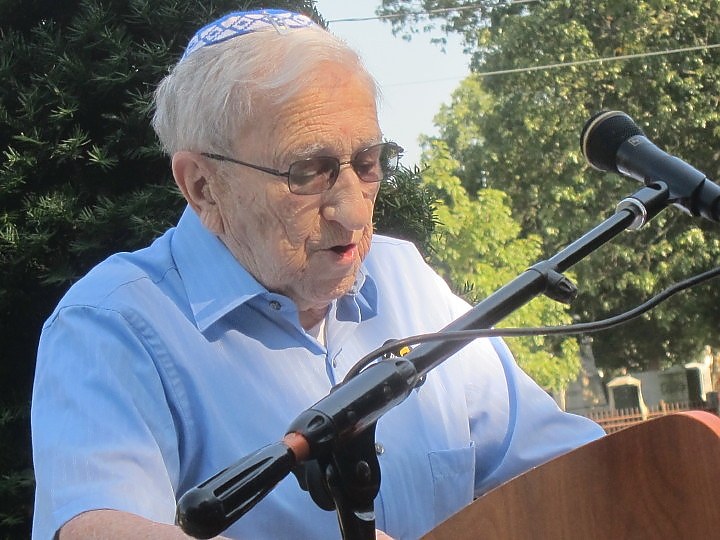 Isidor Juda was on a train bound for Nazi death camps when miraculously it slowed down. He leapt off and escaped. Three uncles, three aunts and two cousins weren’t as lucky. Sunday, decades later, he said the memorial prayer for the dead for them at a communal grave in New Haven.

Stanley Swimmer survived two years as a slave laborer in Germany running a drilling machine that bored holes for the armored plates on Nazi tanks. He lost his entire family in the Holocaust.

Juda’s and Swimmer’s stories — some of the last living testimonials New Haven will get to hear — emerged Sunday afternoon as our area’s dwindling number of Holocaust survivors and their families assembled to say the mourners’ kaddish, the prayer for the dead, and also to mark the 40th anniversary of the erection of the New Haven Holocaust Memorial, where the solemn ceremony was held.

As 50 people gathered at the sun-lit memorial, Swimmer had tears in his eyes remembering his large family of Polish Jews who were sent to the Sosnowiec Ghetto after the Germans occupied Poland.

Before they were all deported to their planned deaths in Auschwitz, Swimmer and other older boys and young men were sent to work as slave laborers in a tank factory at Katzenfurt in Germany.

While he never thought he would survive, he did. When his liberators, the U.S. Army’s Third Division, arrived, 15-year old Swimmer was made a “mascot” by the GIs. Swimmer pulled out a photograph Sunday to show him in the outfit’s uniform.

He got a measure of satisfaction ten years after the liberation when now himself a G.I., with an intelligence unit of the Air Force, he became an occupier of Germany. His job — because he knew the languages — was to try to pick up Russian secrets during the first years of the Korean War.

Many Jews visit their departeds’ graves during the period between Rosh Hashanah, the Jewish New Year, and next week’s Day of Atonement, Yom Kippur. Survivors like Swimmer and Juda have no physical gravesite to visit to say their kaddish, or memorial prayer, for their dead relatives who perished in camps without being buried in graves..

The memorial at Whalley and West Park Street offers that opportunity to say kaddish..

The monument was erected in 1977, the first Holocaust memorial in the country where a municipality gave survivors and their families the land.

Sunday’s event was organized by the Jewish Federation of Greater New Haven, one of the funders of a separate New Haven Holocaust Memorial group that maintains the site.

Juda Sunday was reciting the kaddish for the third year at the ceremonies. He said that when he does, he specifically remembers his uncles, aunts, and cousins — the Wirshobsky, Monath, and Kwartler families — all Austrian Jews who were sent to Theresienstad concentration camp, before being deported to Auschwitz.

Juda’s parents had made it to Vineland, New Jersey, at the end of 1939. The now 96-year-old Juda spent his 17th and 18th years in a displaced persons camp in Switzerland after his escape.

In August 1938 he had been arrested by the Germans as he tried to cross a railroad bridge and make his way to Switzerland. The next day they put him on the train they told him was bound for Salzburg.

Juda suspected immediately that the train was going elsewhere. “The train slowed down. I don’t know why,” he said with a look skyward, suggesting some divine intervention. But it was enough. He jumped and walked two days to Switzerland and to safety.

After the ceremonies, Swimmer had another picture in his pocket to share with a reporter and admiring friends. It shows him, ten years after having been an army mascot, calling attention to his holstered gun. He carried the weapon as an Air Force intelligence officer between 1952 and 1955, part of a unit which was then transitioning, he said, into the CIA.

He had a chance to get some satisfaction, if not revenge, he said, to show some Germans still sympathetic to the aims of the Third Reich who was now boss. “I was the occupying force [now],” he added.

Swimmer says he has diagnosed PTSD He still dreams about his years as a slave laborer.

He put his photographs back into his pocket and walked over to his car, which he then drove back to his home in Woodbridge.