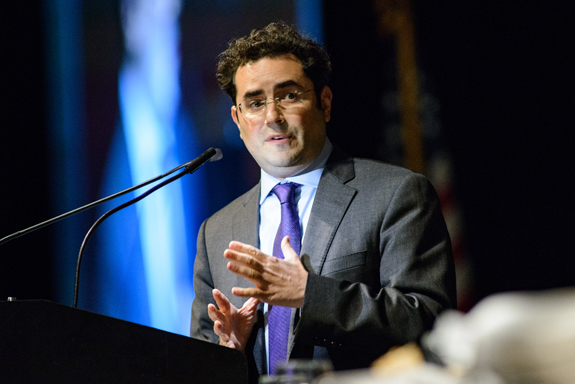 A year of challenges, solutions and celebration of an abiding commitment to Israel and Jewish life was marked Sept. 15 as the Jewish Federation of Metropolitan Chicago held its 116th Annual Meeting at the Hyatt Regency Chicago.

The Federation recognized David T. Brown with its highest honor, the Julius Rosenwald Memorial Award. The luncheon session of the two-part meeting featured the annual State of the Federation address by President Steven B. Nasatir. Linda Schottenstein Fisher chaired the event, saying that Federation helps people “come together across the spectrum of Jewish life to serve those in need.”

Hillel C. Neuer, executive director of UN Watch, delivered the keynote address on what the City of Chicago dubbed “Hillel Neuer Day” in his honor.

Bill Silverstein, the outgoing chairman of the JUF/Federation Board of Directors, passed the gavel to Michael H. Zaransky, the incoming chair, calling him “one of the warmest, most passionate and compassionate people you will ever meet,” adding, “We all remember how he brought such an intensely personal touch to serving as the 2013 JUF Annual Campaign Chair.”

“I am both proud and humbled to follow you in this role,” Zaransky replied. “You build consensus and commitment with your unique charisma and passion.”

In presenting the Shofar Award to Harry Seigle for his work as chairman of the 2016 JUF Annual Campaign, Silverstein called Seigle “tireless,” and “universally gracious. He is always ready to roll up his sleeves,” and he “treats every donor, with sincere respect.” In accepting the award, Seigle said, “All of us are together for good,” adding that, by “prayer and aspiration,” so too will be “the generations that follow us.”

Larry Levy was recognized as the incoming Campaign chair for 2017. Rabbi Michael Siegel, of Anshe Emet Synagogue, gave the invocation, adding, “We are a better, stronger, and more Jewishly fulfilled community because of the work of JUF.”

In recognition of his lifetime of service to the Jewish community in Chicago and around the world, the 53rd annual Julius Rosenwald Memorial Award-JUF’s highest honor-was presented to David T. Brown. Honoring the memory of Chicagoan Julius Rosenwald, one of America’s great philanthropists, the award is presented to an individual who has advanced the goals of the Federation and the welfare of the overall Jewish community.

Brown has served as Chairman of the Board of the Jewish United Fund/Jewish Federation of Metropolitan Chicago and of its Jewish Community Relations Council. He has chaired its Overall Planning and Allocations Committee, and its Government Affairs Committee, where he presented Federation’s positions to officials in Washington, D.C. and Springfield, Ill. He previously received JUF’s Young Leadership Award.

On the national level, Brown is a member of the Board of Trustees of the Jewish Federations of North America (JFNA) and chairs its Human Services and Public Policy Council. In addition, Brown is active in AIPAC and is a regular visitor to Israel.

In his professional life, Brown is Chairman of the law firm, Much Shelist, P.C. He previously served as Chair of the firm’s Management Committee for 13 years. He is a regular speaker and writer on numerous topics, including business planning and succession, and the business aspects of the legal profession. He is a member of the American, Illinois and Chicago bar associations, and of the WPO Chicago Chapter.

In introducing Brown, Silverstein told a story about how Brown had come to the aid of a friend injured while out for a run in Jerusalem. He compared the incident to Brown’s rushing to support Israel during Operation Protective Edge, and to support the Jewish community of Paris after the attack in a kosher supermarket there. No matter where the need was, “David was there,” Silverstein said.

Accepting the award, Brown focused on thanking others for their efforts. He spoke of his admiration for Rosenwald, for those he has shared the dais with over the years, Jewish teachers, and former Rosenwald winners who paved his way.

He then related his own story, growing up in Waukegan and feeling connected to the Jewish community through his congregation and youth group, the B’nai B’rith Youth Organization (BBYO). He participated in the movement to free Soviet Jews.

It was by rising through the ranks of BBYO that he learned what he needed to become a leader, he explained. It’s not where you grew up, how much money you had, or where you went to school, he discovered, but “your role models, your community, and your education.”

The key to success is “many committed individuals working side by side,” he said, concluding. “It takes all of us, all of you, to see that our Jewish community continues.”

Preparing the next generation of leaders

In his State of Federation address, Nasatir reflected on the vital work the Federation and its agencies have done this past year, a year of challenges in Israel and around the world.

“It’s been a painful year- for Chicago, for America, for Israel, for the Jewish people, and for the world,” he began. “We acknowledge the uncertainty and the pain, but we aren’t paralyzed by it. Our Jewish heritage and the 116-year legacy of this Federation teach that inertia is no answer to uncertainty.”

Instead, Nasatir continued, “We channel our anxieties into fixing what’s broken. When others inflict harm, we heal. When others cast shadows of ignorance, we shine light. When others tear down, we build.”

And JUF is able to he said, “thanks to the generosity of Chicago’s Jewish community, which last year contributed $83.2 million to JUF’s Annual Campaign,” part of “a total fundraising effort that generated over $203 million.”

He bemoaned that gridlock in state government is impacting the most vulnerable, including children and the elderly, but outlined Federation’s response: “When the State stopped paying some bills for the entire year, we co-signed lines of credit. Last year alone we increased our loan guarantees by another $100 million. Only a community-wide, community-strong Federation can do that.” Nasatir also mentioned a new way to generate funds to care for Holocaust survivors.

Thanks to its Centennial Campaign, Nasatir continued, Federation has opened high schools and their new buildings, broken ground for a new wellness center, and dedicated new centers for therapy, education and Jewish genetics in Chicago… and a learning center in Israel.

But, Nasatir added, Jewish homes are also essential for Jewish communities. Which is why Federation helps families get Jewish books for free, vouchers for Jewish preschools, scholarships for Jewish summer camps, and volunteers opportunities for teens. “Our young people are our future, and our future is in good hands,” he said.

Nasatir then turned to the issue of violence, especially that fueled by hatred and terrorism. He noted that Federation has been “partnering with law enforcement” for years. Representatives of that field were in attendance, and to them, Nasatir said: “You ‘serve and protect.’ and we are grateful.” He also called for getting “illegal guns off the street and commonsense laws on the books… When one Chicago child is shot none of our children are safe.”

He added that, “We are bringing together Jewish and African American leaders in dialogue to discuss our unique and shared challenges. We are committed to making that relationship even stronger,” mentioning many programs and projects in which Federation partners with its African-American neighbors.

Next Nasatir addressed the “ominous, dramatic rise in anti-Semitism poisoning campus life… ultimately, to rid the world of its only Jewish State.” But Federation’s Israel Education, now on “all 17 of our Illinois Hillel campuses… has now been tasked” to provide its advocacy training on dozens of other campuses across the Midwest. In addition, Federations’ “path-breaking Israel Studies Program brings visiting Israeli scholars to Illinois universities.”

“On our watch, Jewish students will not be vilified or menaced!” Nasatir promised. He praised the many positive ways Hillel supports Jewish life on campus, and congratulated the Silverstein family on the new Hillel they have established in Lincoln Park.

Nasatir closed by noting the deteriorating health of former Israeli President Shimon Peres: “We pray for his recovery.” Nasatir recalled that during the many times he had met him, Peres had always spoken of the next generation. In Chicago, Peres said he answers questions about Israel’s high-tech success by saying, “The Jewish people were born and educated to never be satisfied with the way things are. If you are satisfied, you stop being Jewish. Since you are all the time dissatisfied, you never stop searching for a better world.”

“Mr. Peres,” Nasatir promised, “this Federation pledges that we will never stop working for a better world.

Keeping an eye on the UN

Neuer, an international lawyer, diplomat, writer and activist, runs UN Watch, an organization based in Geneva, Switzerland that monitors and reports on the actions of the United Nations. He was one of the “Top 100 Most Influential Jewish People in the World” listed by Israel’s Ma’ariv newspaper.

In his remarks, Neuer discussed the various ways in which the U.N., and especially its Human Rights Commission, singles out Israel for negative resolutions. The Commission, whose first chairperson was Eleanor Roosevelt, had been “hijacked by dictators,” he said, to the degree that in 2005, it was disbanded and reformed.

However, 10 years on, it is the much the same again, with China, Russia, Cuba, and Saudi Arabia as members. Because they will never investigate themselves, he said, “the worst violators get a free pass.” In that decade the Commission issued 68 resolutions against Israel… and 62 against other nations altogether.

Neuer also spoke of his organization’s efforts to discredit the “experts” the Commission brings to investigate Israel. It has revealed one to be a conspiracy theorist who blamed President Bush for the 9/11 attacks, and another with founding “the Gaddafi International Prize for Human Rights.”

The Islamic states will refuse to put their 56 votes against anyone, on any issue, who sides with Israeli and against them. “Israel is the Jew of the UN,” he said.

However, he insisted that “we can fight back,” concluding “There is intrinsic value in standing up for truth.”

You are here: Home » Jewish Federation marks year of challenges and solutions at 116th Annual Meeting