Holocaust Survivor Speaks About Auschwitz, Jumping Off Train To Escape 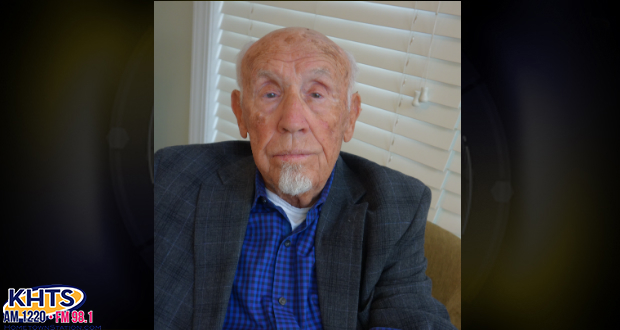 Joe Engel, a man who survived in Auschwitz for three years, recently talked to KHTS about his experience during the Holocaust — 74 years after the first concentration camp was discovered by the Allies.

Engel was born in 1927 in Poland, in a city about 20 kilometers away from the Polish capital of Warsaw. When he was 12 years old, in 1939, Germany occupied Poland.

When they arrived in his city, Engel said that the Germans called for every Jewish person to assemble in the marketplace.

“When we assembled there, they took out 150 young boys,” Engel said. “They took them to the forest, and they shot them to death.”

Engel went on to describe how the Nazis destroyed his city, leaving only two buildings standing. Engel’s family decided that they could no longer live there.

“We took our little belongings, what we had left, and we decided to go to Warsaw,” Engel said.

However, after traveling for two and a half days, Engel and his family found that Warsaw had also been destroyed by the occupying German forces.

“When we got there, Warsaw was 80 percent destroyed,” Engel said. “We could not find any quarters to live in.”

Engel and his family eventually found places to stay, including boarded up churches, synagogues and cellars. They had to fit 20-30 people in each room.

“At nighttime, the floor was not big enough for laying down everybody at the same time,” Engel said. “We had to take turns.”

After some time passed, the Germans decided to create ghettos in Warsaw.

“They took about five or six blocks and they fenced it off,” Engel said. “They posted guards. We couldn’t go out, nobody could come in.”

According to Engel, everyone had to get up at 5 a.m. every morning to collect food stamps.

“Every day, you could see some dead people in the streets,” Engel said. “They died from starvation.”

More time passed by, until eventually the occupying German forces decided to liquidate the ghettos in Warsaw. Engel saw families separated as the Germans first took the older people, put them in trains without food or water and sent them off.

“Nobody knows where they sent them, because none of them came back,” Engel said.

Two weeks later, middle-aged people, young couples and small children were taken to the trains. Engel was part of the last group to be taken, as he and several others were forced to stay behind and clean up the ghetto.

“We didn’t know where the destination was going to be,” Engel said. “But after two and half days, we arrived at Auschwitz.”

When they arrived, Engel saw a sign on the front gate, which he translated to, “If you work hard enough, you might survive.”

“They opened the doors, and outside was Josef Mengele, the ‘Angel of Death,’” Engel said. “He decided who should live and who should die. Out of 1,000 people, maybe 100 went in to Auschwitz and Birkenau, and the rest of them went into the gas chambers.”

Engel, along with the rest of the captured Jewish people, had everything taken away from them, including their names. They were given numbers to identify themselves. Engel’s number was 84009.

After he was selected to work in the camp, Engel was sent into Birkenau, where he shared a bunk with three other people. The conditions were so horrific that many couldn’t find a reason to continue living, according to Engel.

“Every morning when you got up, you could see that you had slept with a dead man all night long, because some people didn’t want to live,” Engel said. “Every morning, you could see on the electric wires, hundreds of people who took their own lives because they had nothing to live for.”

In order to survive, Engel would check dead people’s pockets to see if they left behind any food or better clothes. The Jewish captives were fed hardly anything while they worked, as they were given only 60 calories a day to survive off of, according to Engel.

“It’s impossible to describe what they had done to us,” Engel said.

Engel endured in Auschwitz from 1942 until 1945. On July 23, 1944, the Allies discovered a concentration camp for the first time, when advancing Soviet forces found the camp of Majdanek.

Approximately six months later, on Jan. 18, 1945, the German forces began to break down Auschwitz and Birkenau.

“The Allies were getting close to the camp,” Engel said. “So they took us out, and they marched us. They called it the ‘Death March.’”

Engel and the other captives marched all night in the snow. Anyone who couldn’t keep up was shot dead, Engel said.

Finally, they arrived at an open-roofed train that was waiting to take them further into Germany. In that moment, Engel decided he would make his escape in the dark.

“If they caught me, then I had nothing to lose,” Engel said. “But if I survived, I would have something to tell to the people.”

Engel jumped off the train as it sped at 55 miles per hour towards the heart of Germany. He buried himself in the snow for four to five hours, hiding from the Germans after the train stopped to search for him.

After the Germans gave up on trying to find him, Engel found a forest, where he dug a foxhole with his bare hands. It took him two days because the ground was frozen. He then laid in the foxhole for another two days, until he was too hungry to remain.

He found a farm five to six miles away from his foxhole, where he decided to steal food every two days in order to survive. But even then, he knew he could not survive like that.

Engel confronted the farmer and told him who he was. The farmer connected Engel with a nearby resistance movement, who took Engel in.

“I used to go out on nighttime missions with the resistance,” Engel said. “It was the only way I could survive.”

Now, over 70 years later, Engel regularly goes to schools and colleges, telling his story to make sure that new generations know what happened during the Holocaust.

Ten years ago, when Santa Clarita City Councilmember Cameron Smyth was a part of the California State Assembly, Smyth helped organize local Holocaust survivors in the Santa Clarita Valley to share their stories as part of the statewide Holocaust Memorial Project.

Now, on the 74th anniversary of the Allies’ discovery of the first concentration camps, Smyth stressed the importance of remembering these stories.

“Every day, we are losing Holocaust survivors, as well as the World War II soldiers who liberated many of those survivors,” Smyth said. “It’s important that their stories are preserved so that future generations can learn and ensure that events like that never happen again.”