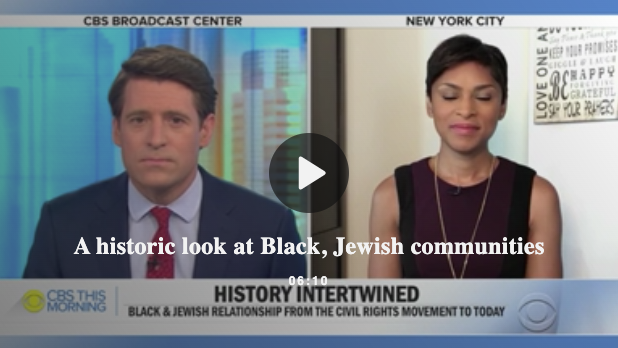 Holocaust survivor Edward Mosberg, who travels the world to share the horrors he has seen, reached out to Jackson to explain why he thinks Black and Jewish Americans should be “highly connected” in their fights for equality.

“The Jewish people went through slavery in Europe,” Mosberg told CBS News’ Jericka Duncan. “And the people here was slavery here by their own people… that was wrong, wrong, wrong.”

Jackson sparked a nationwide conversation when he posted a quote to Instagram he attributed to Adolf Hitler which reads in part, “Jews will blackmail America.”

When Mosberg saw the post, he also saw an opportunity for enlightenment.

“I believe that this is only through education, that all people are the same. No difference as far as I’m concerned,” he said.

The 94-year-old invited Jackson to visit Auschwitz, where nearly a million Jews were murdered during Hitler’s regime.

Mosberg himself said he lost 16 family members in the Holocaust. When asked how he survived, he simply said “by luck.”

The Jackson incident comes as the Anti-Defamation League reported a record number of anti-Semitic incidents in the U.S. last year and amid a reckoning over racism against Black Americans and police brutality.

“There’s something about religion and politics that are deeply ingrained within the traditions, both of Blacks and American Jews,” Terrence Johnson, associate professor at Georgetown University said. “And so when they see themselves fighting against say segregation, Jim Crow or anti-Semitism, In the back of their mind they’re thinking of the Exodus motif. It’s this idea that God is with them in history.”

Black Americans and the Jewish community have been intertwined for decades, as two marginalized groups who often worked together in their longstanding fight for civil rights in the U.S. and around the world.

Their linked paths brought them together during the Civil Rights Movement. During the “Freedom Summer” of 1964, two Jewish men and one Black man named Andrew Goodman, Michael Schwerner and James Chaney were murdered in Mississippi while trying to register Black Americans to vote.

The relationship has been fraught at times, such as the Crown Heights riots in 1991 in Brooklyn, New York that saw tensions between Black and Jewish communities escalate to violence, including the murder of an Australian Jewish student.

Johnson, who also teaches a class called “Blacks and Jews in America,” said the communities’ fight against racism has “pushed and forced” them into a “kind of strange and asymmetrical relationship.”

“Both groups are trying to assimilate, but both are having a very difficult time in the process,” he said.

One leader who had been working to improve the relationship was the late Congressman John Lewis, who was the last of the Big Six activists who planned the March on Washington in 1963.

Lewis and Frank worked to help found the bipartisan Congressional Caucus of Black-Jewish Relations, which aims to advocate for issues facing both communities in a collective form.

Frank said she and Lewis “marched to large important events” where they supported a renewal of the Voting Rights Act when they worked side-by-side on the Atlanta Black-Jewish Coalition.

“I see the future of Black-Jewish relations even strengthened by the stress and the polarization and the bigotry and anti-Semitism and racism that’s just flourishing in our world today,” she said.© 2020 CBS Interactive Inc. All Rights Reserved.