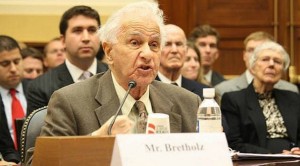 As a French rail company plans to lay down projects in several cities across the country, a 92-year-old Holocaust survivor is speaking out, demanding that the company first make amends for its role in transporting tens of thousands of people to their deaths in the Holocaust.

“It is time for SNCF to be held accountable for its active role in the Holocaust,” he wrote.

The petition has reached nearly 60,000 signatures in just a few days.

“In 1942, after years of hiding from the Nazis because I am a Jew, I was put on a train bound for Auschwitz,” change.org quoted Bretholz saying in a press release. “That train was part of SNCF, the French railway company that transported 76,000 people – including 11,000 children and many American pilots shot down in France – toward Nazi death camps.”

Though Bretholz escaped the train before it reached Auschwitz, all but five of the 1,000 people on board reportedly died in the death camp.

Over the past few years, SNCF has sought to expand its market with a number of high-speed rail projects in cities across the country.

“My life has been forever changed by the actions of SNCF,” Bretholtz said in the change.org release. “It is simply unconscionable that SNCF’s American subsidiary is now competing to build and operate the Purple Line in my home state of Maryland — one of the single biggest contracts in state history — while refusing to be held accountable.”

Maryland Senator Joan Carter Conway and House Delegate Kirill Reznik recently announced legislation that would require any company to disclose involvement it or its affiliated companies had in the deportation of individuals during the Holocaust. The legislation further requires that the company must disclose whether it has paid reparations to its victims.

“SNCF’s actions during the Holocaust were a failure of humanity,” change.org quoted Reznik as saying. “It would be a further tragedy for the company or its affiliates to thrive in the very communities many Holocaust survivors call home without first owning up to its past and making things right.”