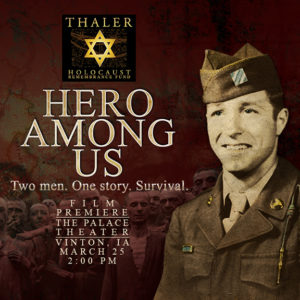 John Gualtier is living a quiet life in his hometown of Vinton, Iowa when a local schoolteacher discovers he has a secret: He is actually a decorated war hero. WWII Army Medic, Sgt. John Gualtier was a liberator of the little known Gunskirchen Lager concentration camp. Amazingly, filmmakers find a survivor of that same camp. The documentary details two separate lives that intersect at the same place and time. Though these men survived the war, could they survive the peace? For one of them, life after the war would prove just as challenging.

The world premiere of Hero Among Us will be shown March 25th at 2 pm at the Palace Theater in Vinton, Iowa. Tickets are $8 for adults and $6 for students. While there is open seating, those wishing to attend are strongly encouraged to purchase tickets in advance.

Production of A Hero Among Us is funded by grants from The Thaler Holocaust Memorial Fund and major media grants from Humanities Iowa and the National Endowment for the Humanities.

For more information about the film and to view the movie trailer, visit http://heroamongus.rivermedia.tv