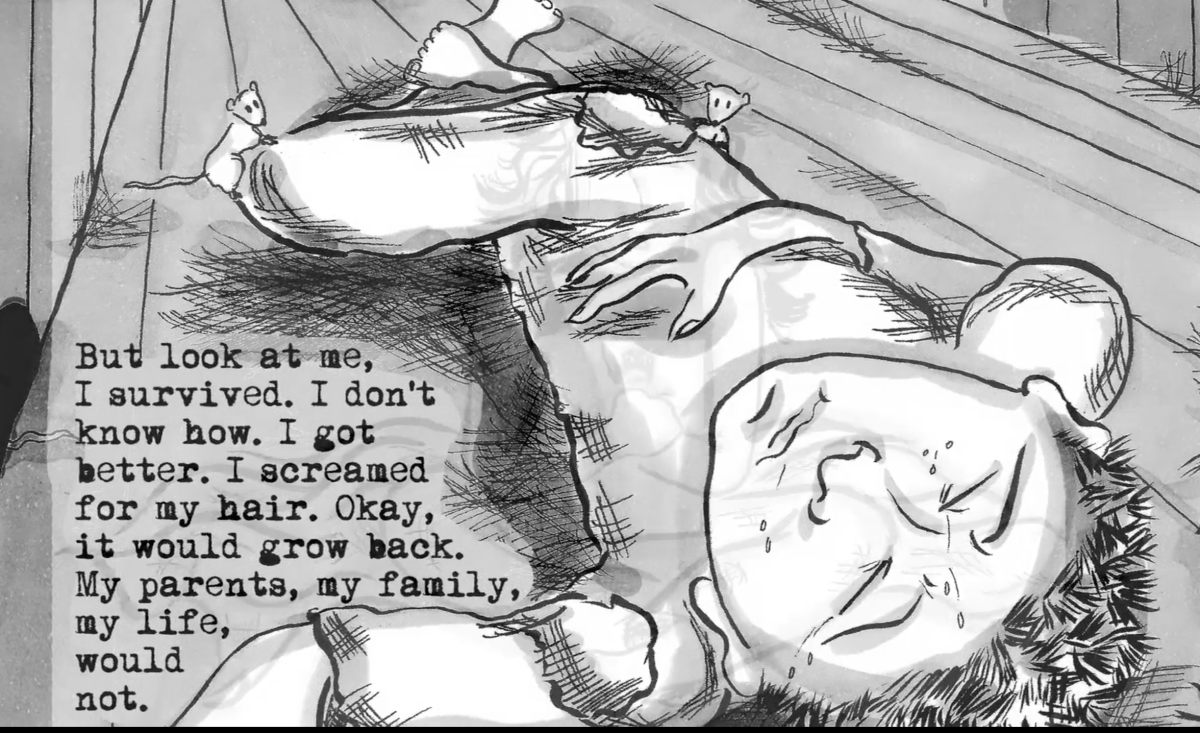 Amy Kurzweil is a writer, illustrator, and cartoonist. Her debut book, a graphic memoir, “Flying Couch,” was just published–and it’s the story you’ve been wanting to read your entire life (even if you didn’t realize it yet)–about three generations of women: the narrator, the narrator’s Jewish mother, and the narrator’s Holocaust survivor grandmother.

Essentially, it tells a coming-of-age story both for the narrator and for the narrator’s bubbe, who escapes the Warsaw Ghetto alone. It’s so good that The New York Times listed it as one of, “The 2016 Season’s Best New Graphic Novels.” Heck yeah.

Writing and art create a place where we can all collectively go to figure out who we are and how our upbringing has influenced us, and Kurzweil delves into her own story beautifully.

I’m so happy to have been able to speak with Kurzweil about why she writes, what Jewish holiday she identifies with, and more:

What was the impetus that prompted you to write your graphic memoir, “Flying Couch?”

There are many “reasons” I wrote this book: wanting to understand myself and my relationship with my mother, wanting to order and understand the events of my grandmother’s early life, wanting to make some sense of “Jewish identity” as a not-really-observant American, but the impetus for “Flying Couch” was, most honestly, reading.

When did you start writing and making art? How did you persevere through all the rejections?

Like most writers, I started as a kid. I will spare you the stories of my childhood journals and plays and family newspapers, but I’ll say I did, at some point, decide that being a writer was my “identity.” And yes, I was dissuaded from writing because of rejection and critique. I remember trying to write something for my high school newspaper’s Arts & Culture section, getting critical feedback from some teenaged hot-shot editor, and then I pretty much decided I needed to stop thinking of writing as my main thing. It was too many other people’s main thing and it just seemed too hard to compete.

But I did continue to write in college, because it felt like a biological need, and then I decided to go get an MFA in writing, and along the way enough people made me feel like my writing was “special” until somehow I stopped needing quite so much to be special, and that’s when I really became a decent writer, I think. The only way for me to persevere through the rejections, which still come constantly, is to see writing as a thing I do and want to do well, and not something my self-worth is entirely dependent on.

Perhaps drawing helped. I also drew as a young person, but I didn’t see this as a special thing I did. It was just a fun challenge, a satisfying experience. It was always less fraught for me to pursue drawing, because I did not expect as much of myself in that arena. When many editors early on told me my drawings in the first draft of “Flying Couch” were not good, it didn’t bother me in a deeply personal way to receive this dismissal. It’s was just like: oh I know, I’m not really an artist, I’m just trying to express this idea with lines and shapes. OK, let me try again. The thing became an overwhelming challenge, don’t get me wrong, but it wasn’t a condemnation. I think there’s an important difference.

If you could be anyone or anything, just for one day, what would you be?

A monkey. Dexterous feet appeal to me. And climbing.

What was your favorite children’s book or young adult novel growing up?

There was this picture book called “The Philharmonic Gets Dressed” that I couldn’t get enough of. It is, as you can infer, the story of the Philharmonic Orchestra members as they each, in their own homes, clean themselves, primp, put on socks and complicated underwear (so sexy!), then drape themselves in delicious black dresses and suits respectively, and then they put on their coats and grab their different shaped cases and leave their homes and take different forms of transportation. At the end, they all take off their coats and open their cases and play music to a glorious full house in a magnificent theatre. It was the most amazing thing!

I think the illustrations did exactly what illustrations should do: they made me feel the sensual details of the story. Each person’s body and hair and clothing was different and that diversity was so satisfying, and then they all came together for this unified goal. Perhaps that book, more than anything, informed my idea of what it means to be an adult artist in a big city.

What TV show have you binge watched?

I don’t watch very much TV and I’m not totally capable of binge watching. I know that’s very non-millenial of me! Too much media makes me feel sick. I don’t know if it’s a sensory overload thing or just … guilt. But I will say one show I watch almost every week is “Saturday Night Live.” Comedy means a lot to me. Even people trying and failing at comedy I find touching. I grew up watching SNL with my parents–it was such a special thing, to stay up late with them and enter into this adult world where nothing was sacred.

Also, I watched all of “Westworld,” but never more than one episode at a time. It made my dreams very strange.

Who are you, in one sentence?

I am just trying my best to be good and make interesting observations about the world.

I really really hate the hiss-clanging heater in my apartment.

If you were a Jewish holiday, which one would you be?

I have to say Passover, because it’s the most explicitly about storytelling. I like this idea of telling stories about the past as guides for the future, and designating sensory symbols (the seder plate etc.) for metaphorical messages about our Jewish story. (Although so many of our symbols are for the same thing: I wrote a cartoon about this here, if you’re interested.)

What’s the best thing about yourself? What’s the worst?

Sensitivity. I feel like I don’t have much of a shell, or a skin. (Do other people really have this, or are they just pretending?) So I tend to feel other people’s feelings or just physically feel things intensely. I think I help people feel less alone, and perhaps my work is informed by precise attention to emotions and sensations. But sometimes I feel overwhelmed, and it interferes with my ability to be generous to others.

Check out the trailer for her book below: