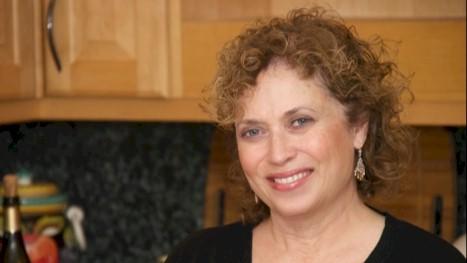 Lynne Kirsche Shapiro is at home in her kitchen. (Posted by Catherine Lambrecht, Community Contributor)

For centuries, Jewish families celebrated their religious traditions throughout Europe, traditions that were integral parts of the culture in many great European cities. All that changed with the Nazis’ program to exterminate European Jewry in World War II, killing six million. Only a small remnant survived. It has been 70 years since the destruction of Hungarian Jewry.

Lynn Kirsche Shapiro, a daughter of Holocaust survivors, chronicles the story of one Hungarian-Czech Jewish family whose survivors emigrated to the U.S. where they created new family traditions and stories, woven through with threads from the old, to celebrate afresh the spirit of Eastern European Jewish traditions.

Food traditions and recipes are enriched by priceless remembrances, sweet, bitter and bittersweet, that put the food in the context of rich, vibrant Jewish life and culture in Eastern Europe prior to the Holocaust. Through telling the story of her father and mother, Sandor and Margit Kirsche, founders of Hungarian Kosher Foods, the largest all-kosher supermarket in the Midwest and a landmark in the Chicago Jewish community. Offering their original family recipes, the voice of one family becomes the voice of many who lived in that time and place. Their survival became a testament to the courage and resilience of all Survivors who had the courage and strength to rebuild their lives.

Lynn Kirsche Shapiro, author of Food, Family and Tradition: Hungarian Kosher Family Recipes and Remembrances (The Cherry Press/August 2014; Hardcover/$35.00) by, loves to cook; it’s a family tradition. Cooking was Lynn’s family’s method of creativity and remembrance, talking and telling stories while cooking together. She learned to cook from her parents, at a very young age, and has passed that love on to her children and now her grandchildren. Lynn has been sharing her family’s stories for years. Working in her parents’ stores since she was a child, Lynn has played an integral role in Hungarian Kosher Foods, founded by her parents, and is involved in developing recipes for many of the home-cooked foods sold there. Lynn is the mother of 4 children and grandmother of 9 (soon to be 10).

Highland Park Historical Society’s archives have moved to the Highland Park Public Library at 494 Laurel Avenue. Archivist Nancy Webster will be available Tuesday-Friday from 11:00 am until 4:00 pm and Sunday from 2:00 pm until 4:00 pm. It is best to call in advance for an appointme

You are here: Home » From the community: Food, Family and Tradition: Hungarian Kosher Family Remembrances