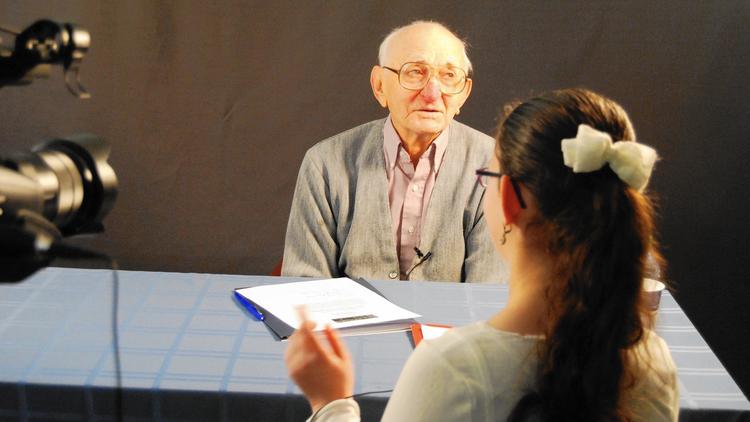 Like many powerful Holocaust documentaries, “Names, Not Numbers” features emotional first-hand testimonies from aging survivors who somehow managed to live through the horrors of genocide when many of their loved ones did not.

The inhumanity and cruelty they recount are difficult to hear, and eighth grade students at Hillel Torah North Suburban Day School in Skokie can be seen asking them questions, filming their stories.

“Names, Not Numbers” is not just a Holocaust documentary about what happened to these eight survivors — although it certainly is partially that; but it is also about a months-long school project that students and faculty say they will always remember.

“Everyone has seen adults interview survivors,” said Hillel Torah history teacher and project co-coordinator Laurie Pinchot. “What about this younger generation that is really going to have the responsibility of telling these stories?

“That was the motivation behind the “Names, Not Numbers” project started more than a dozen years ago by Tova Fish-Rosenberg of Yeshiva University in New York.

“Nobody really understands what the number six million means, but everyone can understand what one story means,” Rosenberg says on the Yeshiva University website. “It makes the Holocaust relevant to the students, and I have seen over and over how the project really touches their souls.”

The “Names, Not Numbers” documentary has become a project staple at the Skokie school. Principal Rabbi Menachem Linzer enthusiastically introduced faculty to the program, and Pinchot and school board member Laurie Hasten have been coordinating it for the last half-dozen years, Pinchot said.

Students say they know about the project before eighth grade, greatly anticipating their time when they become interviewers and documentarians. “The students become so invested in each Holocaust survivor’s story,” Pinchot said.

That clearly comes across in the 90-plus minute documentary produced for the project. The students themselves film the interviews with survivors, Pinchot said, but the faculty works with a professional documentary filmmaker to assemble the final film.

“It’s a collaborative process from start to end,” she said.

Students reflect on their experiences throughout the documentary — as they learn about and bond with their assigned Holocaust survivor.

“In a hundred years for people who don’t know and when there are no Holocaust survivors left,” one student says, “they’ll be able to watch our film and get a taste of what happened in the Holocaust.”

“We’re each human beings and we can’t be defined by just a number,” another student says. And yet another says, “I think we should all be grateful that we live in a free country where we can practice Judaism without having to worry about anti-Semitism.”

Reflecting about the survivor she has come to know, a student says, “She had so little and appreciated what she had. So I have to appreciate what I have and stop taking what I have for granted.”

Depicted in the film are eighth graders learning interviewing techniques from a professional journalist and how to use cameras. They travel to the Illinois Holocaust Museum & Education Center for a meaningful field trip.

And long before the survivors arrive at the school on a cold day, the students have researched all about them and have their questions ready.

For the most part, they have different experiences and come from different backgrounds and locations in Eastern Europe. But each hold nothing back when students ask their questions.

The survivors grew up in Germany and Poland and Hungary and what was once Czechoslovakia. They reflect on pre-war life with beloved family members, many of whom were killed during the Holocaust — and about how they managed to create a new life for themselves after the war ended and the world they once knew no longer existed.

Eighth graders Bayli Alter and Noah Roffe of Skokie admitted they were initially nervous when meeting and interviewing their survivors.

“I was afraid I would stutter when I asked her a question — that she wouldn’t understand or I wouldn’t be able to understand her or that everything that could go wrong would go wrong,” Alter recalled. “But at the point when I was the one asking her questions, all these things kind of just melted away.”

Alter said she never will remember anything more from school than this experience.

Roffe said he felt “extremely fortunate” as his survivor was telling her story. “It felt like it was almost Thanksgiving,” he said. “I felt happy I’m living in America and have basic human rights unlike she did.”

Once the project is over, the students say, a bond with survivors often remains. Roffe and a couple of friends recently visited his survivor, Perkal, and delivered goods to her for the Jewish holiday of Purim.

Hillel Torah was one of 16 private schools in the country to participate in “Names, Not Numbers” this year. Pinchot realizes that the project won’t always be available in its current form because of the age of survivors. The experience is always as profound for them as it is for the school, she said.

“I was so proud to have been a participant in this project,” Perkal wrote in a thank you note to the school this year.

“I feel (the video) contributed to the memory of the 600,000 Hungarian Jews that perished,” Boros wrote in a similar note.

Pinchot remembers a survivor speaking about her experiences for the first time for a previous “Names, Not Numbers” at Hillel Torah. The survivor’s son, in his 50s then, sat in the audience with tears because he had never heard her story before.

“She and her family said there was something about speaking to eighth graders — speaking to 14-year-olds — that made a difference,” Pinchot said. “It was that sense that she was passing on her story to the next generation. She was very nervous when she started and then she loosened up right away when she saw the kids. For her, it was like telling her story to her grandchildren.”

Copyright © 2016, Chicago Tribune
This post from the Skokie Review