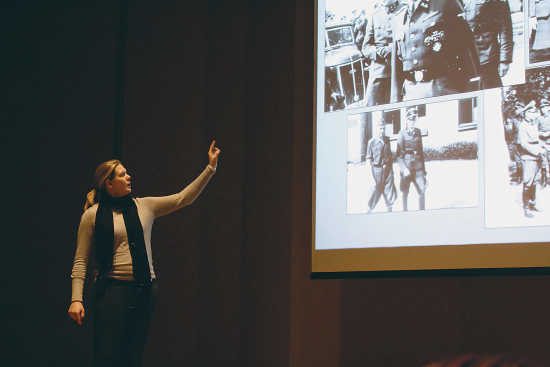 Nevada Daily Mail”In previous years, educational curriculum teaching the Holocaust has tended to focus only on the male population experience,” noted Dr. Shelly Cline, who spoke to members of the public, students and faculty as the latest speaker in the 2015-16 Distinguished Speaker Series sponsored by Cottey College’s Serenbetz Institute for Women’s Leadership, Social Responsibility, and Global Awareness.

Cline told the audience that only in recent years, beginning in the 1980s, has there been a move towards studying women’s various roles within the concentration camps and ghettos.

During her address, Dr. Cline explored gender and identity issues in that context during the Holocaust in 1933.

As a precursor to this event, Dr. Cline visited a few concentration camps, including Ravensbrück, the only all-female concentration camp in northern Germany. Currently, Dr. Cline is the public historian of the Midwest Center for Holocaust Education in Overland Park, Kan.

Throughout her career, she has taught at many universities as well as done extensive research on Nazi women perpetrators. On Friday, in Cottey’s Center for the Arts, Dr. Cline gave a thought-provoking presentation where she discussed the survivor-victim perspective and also that of perpetrators.

Before beginning, she emphasized that when talking about gender in the camps, “it is not meant to create a social hierarchy of who suffered the most or who is better at surviving, but rather how did each gender experience the world of the camps.” 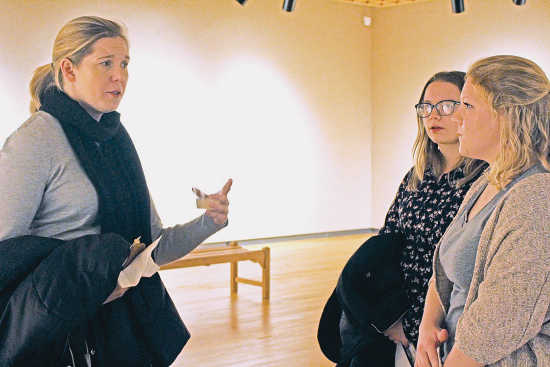 As the presentation progressed, topics led into deeper waters where she began to talk about the violence against female individuals in the camps and the further dehumanization of their identity.Initially, gendering the Holocaust was widely criticized and opposed specifically by Lawrence Langer, who called exploring women’s experience in the Holocaust “favoring the suffering of one group over the other” and that people should look to a universal experience — men’s experience.”

Dr. Cline said she believes it is important to address women’s experience in the Holocaust to gain understanding of history, people, and intergroup/intragroup relations.

During the Holocaust, Dr. Cline explained that the experiences of women were different in the ghettos than it was in the concentration camps.

While the ghettos provided a cohesive family unit, they also created more responsibilities that the women had to endure — for example, washing and mending clothes, cooking, sorting food rations, and caring for the children and sustaining the family, all with adequate means in short supply.

In addition, there were occurrences of violence and harassment in both the ghettos and concentration camps, to the extent that women were used, abused, and exploited in a system where they carried little value, she said.

Concentration camps, such as Ravensbrück, had an all-female population, including women guards who received less training than their male superiors and who tended to employ harsher and more severe punishments than their male counterparts, said Cline.

The Nazi SS did not see the Nazi women guards as necessary and so they did not hold any real status and were not treated with any more respect than Jewish women.

Interestingly enough, said Cline, these Nazi women guards freely admitted to their transgressions and brutality during trial; where the Nazi men knew how to self-protect, deflect responsibility and stated simply that they were just following orders. Female guards were not taught these skills, Cline said.

From the beginning, gender mattered, from the sorting of women, men and children upon arrival, to the treatment of women in the concentration camps for the duration of their imprisonment.

Although men, women and children shared the universal experience of imprisonment, there are definite gender differences in the perception and “living through” of that experience, said Cline.

Victimization and survival of this horrific trauma as seen through the eyes and voice of women brings a much needed awareness and affirmation of their unique experience, she said.

Despite the differences, the story of women’s experience and identity in the Holocaust must be told and their effect on history is as important and valid as the more well-known male accounts, she concluded.