Daffodils planted at College of Charleston in honor of Holocaust survivors, victims 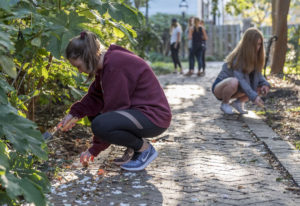 Diny Adkins listened intently, her eyes brimming with tears as a College of Charleston student performed a song about the Holocaust.

The song, told from a young girl’s perspective, brought Adkins back to when she was 4 years old in the Netherlands and witnessed Nazis shoot and kill her playmate. She had once shared tea parties with the girl, who was also only 4. Years of misery followed as Adkins struggled to survive in hiding.

Adkins, among an audience at the college’s Jewish Studies Center on Sunday, nodded her head after student Sophie Forstein concluded the acoustic song. “Beautiful,” she remarked.

The 80-year-old was one of four local Holocaust survivors who attended the second year of the Daffodil Project, which brought students and community members together to plant about 2,000 daffodil bulbs on the college’s campus. Samantha Krantz, a junior majoring in public health and Jewish studies, spearheaded the event in conjunction with the Daffodil Project that aims to plant 1.5 million daffodils across the world in memory of the children killed during the Holocaust. Daffodils are meant to represent the yellow Star of David that Jews were forced to wear during the war.

Krantz hopes the flowers, planted at four spots on campus, will cause people to stop and think and then take action.

“I hope when (people) pass the daffodils that they see a hope for the future,” she said, “and when they come across any act of hate or any genocides happening around us, that they will stand up and voice their opinion.”

Before the daffodil planting, philanthropist Anita Zucker spoke to a room of mostly students about her mother’s experience after Nazis invaded her Polish town. For years, Rose Goldberg, now 93, who attended Sunday’s event, navigated her young niece and two brothers to safety in cramped spaces after many of their family members were killed.

Zucker said she marvels at her mother’s strength, which was driven by her faith and love for family. She encouraged those in the audience not to sit idle as injustices happen in society today.

“We just have to protect each other. We have to take care of all of us, because we’re the only ones that will,” she said.

Other local survivors Joe Engel and Ann Fields also attended Sunday’s event. Adkins said it’s important for people like herself to share their stories to help fight hatred and intolerance, which she still encounters. Just recently, during one of her many speaking engagements, a student told her he heard from his parents that Jews are supposed to have horns.